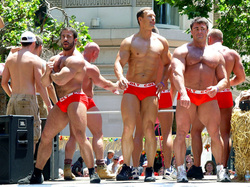 Why do they do it? These men and women who are  bodybuilders? The rippling muscles, the great broad shoulders –all this flexing  and oiling of over-grown tissue. I can’t understand it – yet there is something immensely satisfying in a sense of strength, if you’ve got it! The labourer on the building site who carries far more bricks in a load than he needs to –  rejoicing in his physical strength. It impresses. So too in the animal world –  the cheetah running, the elephant pushing over a tree, the penguin as it spins and dips in the water. The attractiveness of physical strength used well is impressive – is awe-inspiring.

I taught myself to swim as an adult. Even at my peak I have to admit I had to stop every few lengths of the pool in order to
recuperate. I never did manage to catch up with my eight year old daughter who could do 20 lengths without a break easily. In the pool I was all too conscious  of what I can usually avoid in everyday activity – my physical strength is
waning. As a child I could never understand why my granny wanted to rest her eyes (as she put it) for a few minutes every afternoon and evening. You’ve guessed it! I now find myself saying to my children, ‘Just let me rest my eyes
awhile.’ These are trivial things I know, but they point to something else. I worked as a hospital nurse in my twenties and I saw many men broken in spirit because age and infirmity had taken their strength away from them.

Strength speaks of power, of independence, of vigour, of ability, of dynamism, of activity, of growth, coping, and so many things. It is such an attractive idea, and it applies to so many things. Indeed many within the church would want to apply the idea of strength to the church. Once it was so obviously a powerful, strong institution in the land – literally the maker
and breaker of kings. Now that the church is most definitely not that, some say we should talk of another kind of strength and you here mention of ideas like ‘power evangelism.’ I once saw a troupe of Christian bodybuilders who exploded
rubber hot water bottles by blowing them up with their own breath in order to demonstrate that God is not a wimp. I understood their motivation, though I thought them misguided.

For many outside the churches, strength is the last word that many would use of us. People point to derelict former places of worship or carpet warehouses in what were church building. The number of clergy seems to get less and less. Many congregations feel themselves burdened by costs. A once familiar church presence seems to have disappeared in many places; I know one community of 30,000 people where there is just one church building left standing whereas a generation ago there were seven. Strength isn’t the word that comes to mind for most people.

‘Be strong in the Lord and in the strength of his power’(Ephesians 6.10). Be bold, be strong, and take confidence in your
God.

We can’t turn a blind eye to the reality of change, but we shouldn’t be cowed by these pictures of weakness. We are still ‘the early church’ and God isn’t finished with us yet. Our picture of where we are is determined by our own perspectives and experience – but it is God’s perspective that ultimately counts. Right now the church continues to grow apace –
professing Christians remain a third of the whole world population as we have  been throughout the whole of the last century. Congregations are growing;  Christian education figures massively in many places; the Bible is out of the
academy and making a real difference to confidence and life experience of vast numbers of people. ‘Ah, he’s talking about the poor south of the world,’may be the dismissive response, but don’t be fooled; it’s isn’t all ‘over there.’In the
last ten years about as many new local churches have been formed in the UK as have closed. Yes, many things that once marked the strength of the church in our land are no more, but not everything about the Christian presence now is weak
and ineffectual. Don’t let’s be disabled as people of faith by our perceptions of loss of strength.

If we feel ourselves to be burdened by change and out of touch; if we feel the connections are too often missing between faith and daily life; if we feel sometimes that it is all too much and that we are too weak for the task, and our energies are on the wane, then we have already made the first step to the recovery of confidence. We’ve realised that it’s not our abilities, not our preferences, not our adequacies that count– but God’ own strength. ‘Be strong in the Lord,’ says Ephesians. If we know ourselves to be weak we may know  for ourselves the graciousness of a God who shares himself with his people. We’ve already taken the first step towards overturning the arrogance of human power.

Do you remember the story of David and the giant Goliath – the slip of a lad who came out to fight the great warrior? He couldn’t wear King Saul’s armour because it was too big and heavy for him. So he went out with nothing but a pocket of small stones and the power of God. In other words, he left behind the armour the world would provide and took only the armour God provided. We are called to be Davids – to leave aside worldly power and to step forward lightly and free of encumbrances. Don’t be cowed: God’s power is more than enough.

Be strong in the Lord. be certain of his spirit with you, even when it doesn’t feel like it; that spirit that brings peace and is yours to share.

Be certain of the Lord who brings you salvation – not an airy-fairy out of this world affair, but freedom here and now from all the things that threaten to ensnare you; for it is the power, the might, the strength of God that frees you.

Be certain of the God who offers you faith in a truth that stands the test, whatever it may be.

Stand up! Be strong in the Lord and in the strength of his power. Stand up, don’t grovel. You will not collapse; he will raise you up in his strength – and that happens again and again:

·     an elderly man disabled with heart disease who managed to care alone and tenderly for a bed-ridden wife
·     a church about to be declared redundant where the handful suddenly found new life
·     a clergyman imprisoned for helping prisoners families – so alone and so frightened, who amazingly found new courage

So many more too – people alert to the world and its  circumstances, prayerful people, persevering people, who are certain that God will see them through, even when he seems farthest away.

This God has done – his strength has seen me through. Such really is the whole armour of God; the sustaining power of his spirit at  work through faith, bringing salvation to his people. All praise to him!