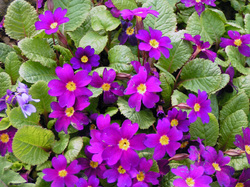 She was already aged, though her youngest son, Charlie, was still a young man.  Somewhen in the early 1960s she went to the doctors unable to sleep.  The doctor said he could prescribe some of these new-fangled sleeping tables if she liked but on the whole he thought it better if she took half a pint of cider each night before bed.  So that’s
what she did.  It cured her insomnia - and it was Charlie who although he lived miles away, for the next fifteen years made sure his old mum always had cider in the house for her nightly draft.  He was a big guy, tough as nails, a truck driver, but as soft as putty when it came to “me dear old mum” as he called her.

One of the delights of living in a  city is the opportunity to simply go out and watch people.  I so often I see a mum and daughter shopping together, obviously intent in their task, simply enjoying each other’s company.  There’s a myth about that this relationship counts less than it did - I think that is hogwash.  Millions of people saw Ronan Keating  getting tearful on a TV chat show because his mum died before the extent of his fame and popularity became clear.  And  millions of those who watch him, knew just what the tears meant, could feel for themselves the depth of the emotion.  "All that I am or ever hope to be, I owe to my angel Mother," said the great American President Abraham Lincoln (1809-1865). We’d all say, “Yes, that is as it should be.”  In this cynical age we’re conscious that it isn’t always like that, that things can go terribly, tragically wrong, but today we celebrate the best of that unique relationship that is mother and  child.

What do you hold dear and remember about your mum?  Is it the things of childhood, when you were so dependent?
Or is it things of later life - of being encouraged towards independence, or perhaps of the tables turning and you being responsible for her? Whatever, this day asks you to think on encouragement, on care, on restoration and forgiveness, on a friendship, on sharing, on the things of motherhood that made you “you.”

I can feel a little put-out that this day interrupts my Lenten observances, but then I remember some incident, some saying, and I realize the profundity found in ordinary, everyday care and sharing.  It's good to have a day to think about these things. What makes you smile about your mum?  My mum once got trapped in a public toilet in Shepton Mallet.  My mum’s mum, used to come and watch the soap opera Coronation Street on our TV (she hadn't got one) on Wednesdays ONLY, in the days when it was on twice a week.  I think of my mum leaving 1s 6d a week at the village shop for me. I think of my Dad’s mum, who collected lawnmowers.  I think of my mum giving me a ride on the paper jogger - and making coffee from Camp coffee essence for the workers in the printing works.  She taught me how to fold paper properly!

What do you remember about your mum?  In the remembering, in the cards and the chocolates, in the flowers and the phone calls, we thanks God for something fundamental and special that made each one of us.

I love those books of children’s letters to God, one of my favourites goes:

Dear God,
Do you get your angels to do all the work?
Mommy says we are her angels and we have to do everything.
Love Maria.

I’m often asked whether I prefer being called Christopher or Chris.  Well, I don’t really mind, but what you mustn’t call me is Chrissie - the  only person I tolerate that from is my mother.   Mums seem to have a special gift for pet names,  - I’ve known Podge, Dimples, Dily, AliB, Maudie Littlehampton, and lots of other too. Family pet names say something special about you - perhaps something only your Mum and Dad know about you. Moses was a a name like that - Mosheh sounds like mushah, to draw something out, say draw some water.  She knew where he had come from - his Egyptian foster mother.
He was saved from death by that.  We celebrate being known in a special way - memories shared.

We celebrate the hope our parents  placed in us - and other people too, who have been parents to us at different
times.  In God’s economy the remarkable thing is that these vital personal relationships come to us in all sorts of forms - not just those of our natural mothers.  Ralph the nurse, Mrs Santer the teacher, Geoff Grant the clergyman.

St Paul wrote that he knew lots of affliction and troubles, but the sharing of those things brought consolation,
and out of that consolation came unshakable hope.

A mum is the one who you can alwaysgo to when you’re in trouble, the person on your side through thick and thin.  But sometimes the trouble is even in the closest of relationships:

There is a story told in Spain of a father and his teenage son who had a relationship that had become strained. So
the son ran away from home. His father, however, began a journey in search of his rebellious son. Finally, in Madrid, in a last desperate effort to find him the father put an ad in the newspaper. The ad read, "Dear Paco, meet me in front
of the newspaper office tomorrow at noon. All is forgiven. I love you. Your Father." The next day at noon in front of the newspaper office, not one but  800 "Pacos" showed up. They were all seeking forgiveness and love from their fathers!

"The heart of a mother is a deep abyss at the bottom of which you will always find forgiveness." -- Honore' de
Balzac (1799-1850)   We celebrate personal forgiveness, new starts, mom a person always on your side -  memories shared.  As the Eucharistic prayer has it,

As a mother tenderly gathers her children, you embraced a people as your own. When they turned away and rebelled your love remained steadfast.

Did you notice Jesus’ mother and father were described as being amazed at what was being said about him?  An ordinary family doing ordinary things - how could their child be destined for the falling an rising of  many?  Amazed - that mysterious quality of life that turns things around - an ordinary boy, he did the chores,learnt at synagogue, followed Joseph’s trade - yet became the person to influence more for good than any other living soul.

Ronan Keating speaks of his  mother’s encouragement - did she know any more than Mary did?  Did Einstein’s mother, or Bach’s, or Mother Theresa’s?  No, they all did what Mother’s do - hopeful, loving, ordinary - and would have been amazed at what became of their children, but the beginnings of great things began with them.   "Youth fades; love droops, the
leaves of friendship fall; A mother's secret hope outlives them all." -- Oliver Wendell Holmes (1809-1894)

We celebrate the ordinary things of mothering,  - for there began the road that brought us to today.