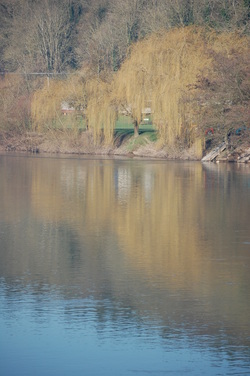 Nowadays any moderately long journey will present you with lots of evidence of  water consumption. Empty plastic bottles litter our street corners, are left on buses and trains, and feature in recycling bins now well established in lots of places. The full version you see  stuffed in pockets, handbags, and clutched with newspapers and paperback books.
Hydration culture rules – 45 minutes on a train is it seems too long to go
without water.

Now I know that something like 66% of the  human body consists of water and that we’re losing it, one way or another, all the time, but do we really need to be drinking so frequently that we must carry the stuff about with us? My granddad would have thought it mad – no one of his
generation carried water.  He had a physically onerous job but he never carried water with him. Sure in his snapping – what he called his lunch box –there was a large bottle of cold tea, but even that was only used at meal breaks. Likewise my farming cousins did have drink breaks at harvest time – but that was tea or cider brought to them at specific
times – they never carried water.

Continuous  access to water is a peculiarly modern and wealthy  fixation.
Could it be that it says more about our spending power and our status  than our bodily needs? After all such easy access to water isn’t the lot of so many of our global neighbours. Water is a scarce commodity in so many places, and much energy and effort is put into procuring it.  We’re told that something like 780 million people don’t have access to reliable clean water, and that lack of access kills children at a rate equivalent to a jumbo jet crashing every four hours. Frightening figures – yes, access to clean water is a matter of life and death; a matter of life’s
potential realizable or denied. In these terms my plastic Evian, Aquafina, Fiji, Volvic, Buxton, Spa or whatever, is as much a badge as a resource: ‘I have access to water’ – in the life stakes I’m already a winner.

And that’s one of the things about these folks in John 5 waiting at the poolside; waiting by the water. They were near to
the  water – life giving water – and yet they might as well have been locked out of it, indeed locked out of the city in which the magnificent pool was situated (as they probably were each night as the ‘riffraff’ weren’t allowed to remain
overnight within the city walls). The life-giving quality of the water was only available to the first person immersed as the water bubbled into life. Most of  them were too ill or too disabled to get to the water in time. We may wonder
whether the man Jesus healed had been dragging himself to the pool-edge every day for 38 years; whether his place there was a sign of more recent desperation or not, it’s very clear he has been waiting for a very long time. Access to
restoring water was denied him – although each day he longed for it, and such was his longing that you could properly say that ‘he thirsted’for it. And it seemed that he was never going to be a winner in this life’s stake.

He lay there on his mat, among all the others – throwaway people crowding the route to life-giving water. Nothing to
offer, no sign of anything anyone else might value, simply nuisances that got in the way of other people getting to the water. Can’t you just hear the complaints? ‘It’s a disgrace all these beggars crowding out this fine pool.  They look awful
and they smell awful. Someone should do something about.  They need clearing.  What’s the point of a lovely pool here in the middle of the city if you can’t get to it without clambering through this lot?’

I wonder if similar things were said about the Jews that gathered for worship at the riverside outside the city of
Philippi? Sure the confinement of city streets and a pool’s porticos wasn’t their lot. We may imagine that there were
lots of routes to the water’s edge in a way there wasn’t at Beth-zatha in  Jerusalem.  Nevertheless their very gathering said something that wasn’t likely to please the residents of Philippi. This city was a Roman colony – in other words an outpost of Rome itself that was extremely proud of its Roman way of life, and that did all things in a Roman way. It was
full of military veterans who owed everything to Roman organization and Roman obligations. The last thing they
wanted was to be reminded of was a troublesome corner of empire where the things they held dear were constantly threatened and challenged and goaded at – the Jewish corner of empire. They were probably glad that there was no synagogue in their city. But this lot on the riverbank reminded them of  dissension they might otherwise not notice. Not something welcomed when all you want is washing water, or a chance to cool off from the hot sun! Might those
Jerusalem complaints have been repeated – in tone at least? ‘This lot need clearing out.’

Notwithstanding the locals' antipathy, someone in the Jewish gathering is convinced and moved by what Paul says. That
person is Lydia; we are told she is a god-fearer rather than a full convert to Judaism. In other words she is sympathetic to the people of Abraham’s God and  joins with that people in their devotions but hasn’t fully obligated herself to
a Jewish way of living. She has already come a long way in other things as well: first, she has moved from the town of her birth, Thyatira in Asia Minor, and second, it is the wealth of her trade that has brought her to Philippi. Lydia is right at the top end of the trader’s social scale – she is a dealer in purple cloth – an extraordinarily expensive commodity because the dye needed has to be collected drop by drop from a particular shell-fish. Lydia is a wealthy gentile with strong leanings towards the one true God.  She puts herself in the way as the man at the pool was in the way, but the mechanisms of that ‘putting in the way’ are rather different.

The man at Bath-zatha is there out of desperation, thirsting for change but finding his way barred. When he is
healed he worries about what the authorities might do and identifies Jesus to them (5.15). He remains, it seems, fearful and trepidatious. No wonder Jesus later challenges him (v.14). He is not let free of what has held him for so many
years – he is living as if his body hadn’t been cured.

Lydia is at the riverside because she chooses to be and her faith makes her bold. She and her household are baptized –
an immediacy  reminiscent of the calling of the twelve – and she openly challenges Paul to respond to her: ‘If you have judged me to be faithful to the Lord, come and stay at my house.’ And Paul with his companions does exactly that. Remember this is taking place outside the walls of a European city, Lydia although sympathetic to  Judaism is still a gentile, and her wealth no doubt draws attention to what has taken place – certainly the efforts of Paul and the
others is going to become ever more contentious in Philippi (5.15f) yet Lydia remains a ready  supporter and her home becomes a centre of the new Christian mission (16.40). She lives the freedom she has found.

‘The angel showed me the river of the water of life, bright as crystal, flowing from the throne of God and the
Lamb,’ writes St John. This is the water that always refreshes; the water that  quenches every thirst; the water that revives and invigorates. This is the water that is a sign of something else – not status, or wealth, or casual commodity –
but the gift of  life eternal. Its vessels are never disposable or throwaway  because they are the souls who live its invigorating quality. Its availability is never constrained by power or privilege or ownership because its course is
mapped as a gift from a gracious God. It is priceless because is crystal quality find its origins in God. Access to this water is never constrained, restricted or circumvented – it always flows. This is the water that stirs its drinker to always have a heart for those whose lives are constrained, restricted or circumvented. Access to water – actual and metaphorical – is always an issue. Every casually cast aside bottle a reminder.