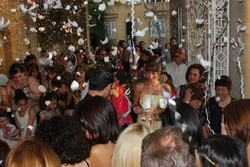 Chicken, rice and peas isn’t exactly what it seems, for  the peas are beans!  Nevertheless  it’s a delicious Caribbean concoction.  Much loved for parties.  And that’s what gave her the idea. Why not have chicken, rice and peas for a multicultural Harvest Supper?  A big occasion so it needed some planning.  The dish was cooked in batches and deep frozen in individual portions.   The tickets sold like wild-fire – 80, 110, 140, 180.   A sell out!  Industrial microwaves were hired in for the occasion.  The first portion came out for re-heating.  The lid pealed back –  to reveal a grey, furry jacket of mould! What a party spoiler!

Gathering here today should take your breath away.  The spectacle of colour and form and smell should make us all go, Ah!  Anything less is a party spoiler.  Worship is meant to be 'out of this world,' quite other than our ordinary day to day routine. It's meant to lift our hearts, lift our souls, towards the splendour of God.  Nothing less.  Heaven lies about us – at least a glimpse.  Clouds of glory trail about us.  Take delight in this.  Be a party spinner, not a party spoiler!

What’s a celebration without wine? That’s a real party spoiler!  The wedding at Cana in Galilee was going down the plug hole.  In a sated society like ours, where all manner of food and drink is easily available to delight us, and where festivity comes relatively frequently, it’s easy to miss the significance of this wedding get-together.

In the Palestine of NT times a wedding was a really notable occasion, a much valued break from the relentless toil of a peasant economy. A break from the prison-house of back-breaking physical labour.  For perhaps a week of festivity the
newly married couple kept open house. They wore crowns and dressed in their bridal robes. They were treated like a king and queen, were actually addressed as king and queen, and their word was law. In communities where there was much
poverty, constant hard work, and the ever present threat of hunger, these days were one of the supreme occasions of life.  For the wine to run out was a spoiler indeed.

Wine in scripture one of God’s most precious gifts.  The psalmist says it "gladdens folk's hearts" and elsewhere it is referred to as a blessing from heaven. It eases the curse that lies over the earth and the labour that goes with tilling the soil.
The rabbis used to say that without wine, there is no joy. In fact, in one well known dictionary, one of the definitions of joy is "something which invigorates or cheers, like wine." For the party to spin, wine is a must.

And Jesus makes it spin alright!  There a verse that follows that is never read in worship, it says After this he went down to Capernaum with his mother, his brothers, and his disciples; and they remained there a few days.  It’s the “remained there” that’s the clue.  Yes 'lodge', 'stay', 'dwell', 'remain', are all adequate translations. But I’m certain it could mean 'rest'. Do you get it?  John is telling us that this wedding had been such an almighty party that they had to rest for a few days after it - they had had such a knees up that they needed to sleep it off!  That’s how the ministry of Jesus begins - at the least it tells us that God wants his people to have a real hum-dinger every so often!

But of course the story of Cana in Galilee isn’t meant to be tips for a perfect dinner party – like one of those self-help manuals so popular in the shops.  John the Gospel writer tells us about that wedding because of what it tells us about God, tells us about Jesus – for this was the first of his signs by which his glory was revealed.  This incident trails clouds of glory.

Learn here that God does not intend your life to be wineless, to be dull, tedious, full of worries, and always hard pressed – the  prison-house of life without God is broken open.  Learn here the joy of God’s party.  Learn here that delight and fulfilment that lives in you eternally – the vision splendid that comes from God.  Have you seen mention of that report encouraging greater provision of dancing for older people? It seems dancing actually lengthens lives and keeps people mentally alert.  If a tango or a waltz can achieve that, imagine what a samba with God can do! John wants his readers to know for themselves the superabundance of God’s vintage.  Wants them to know that once tasted, that wine doesn’t run out, even when life seems tasteless.  God’s a real party spinner – there are always more delights to come, more blessings to be had.

Did you notice the chief steward congratulated the wrong person for the very lovely wine he had just tasted? He congratulated the bridegroom - not Jesus. The wine was not real because he believed; it was real despite his complete ignorance of where it had come from or who was responsible for it.

This tells us something about how we look at the Holy Communion.  God's blessings are real and present, even if we don't believe in them or mistake their source. Certainly we are meant to take and eat, but they are taken and eaten by all, as
we perceive and as we believe, but they are real and present even if we don't. They are present and real, for blessing, for
all - not blessing for some and disapproval for others. God's blessings are real and for all. They are not fleeting, only visible to the true believer or the suitably penitent.  God is a party spinner – the superabundance of God’s love is free, available,
inclusive.  And super, superb, is the right word; for God’s love is the best of wine.  In the story 180 gallons of the very best – a fortunes worth!

God's blessings are real, not fleeting; and for all, not just for the initiates; and are overflowing not stingy.


I've forgotten where I first heard the old one about the authority in the Catholic Church being the Pope, in the Protestant Churches being the Bible and in the Anglican Church - what the last Vicar used to do! I guess the essential nature of the third of these is ever looking backwards.  ‘The wine has given out,’could be the shout that signals the end of the party, but with Jesus it turns out to be just the beginning.  The miracle of the water turned into wine is the transformation of the
past into a new and quite more wonderful present and future – a vision splendid.  Here is a momentum towards God that changes our perspective on everything.  The best is yet to be!  Gospel living is always moving towards eternity - not optimism, not a naïve belief in inevitable progress, but the certainty of God as our goal. God the party spinner! – it makes your head and heart spin with delight!

Jesus turns around the party that was in crisis – the new  wine of his love overflows.  Yes, this is a story to encourage us to share the cup of Christ’s wine. Don’t be a party spoiler.  Share it out. Yes, this is a commentary on the cross where the wine that flows is human blood.  The crisis is that deep; the remedy that profound.  Yes, these empty water jars are symbols of the muddle, mess and exclusivism of human institutions.  Penitence is required; God’s grace so often abused.
But the story is also about simply living and delighting in life, how we live in the light of common day. With Jesus what was ‘just water’ becomes the most delicious vintage.  Because Jesus is, the glory’s here, trails of glory, here. But what might that glory be?

Parties?   Perhaps
– that sixtieth wedding with generations gathered around, the elderly couple beaming at the consequences of their relationships.
– the baptism party of a baby whose birth has brought wonderment and deep joy to a longing couple.
– friends gathered to celebrate a colleague’s achievement,  ‘it couldn’t have happened to a lovelier person.’

But not just parties, also those simple moments of wonder when you catch a glimpse of glory – a blazing sunset, a perfect rose, rainbows in the rain of a summer shower, a toddler transfixed by the shimmering coat of a beetle on the
path.  But not just the natural world, also those daily things that touch us with a flicker of something more than ordinary –push yourself back in the armchair and sip the tea after a day of satisfying work; watch the woman knitting where hands and brain and needles and yarn seem strangely all of a piece; watch the child run, run like lightning, not because she must but simply because she can; lean on the hoe and want the plants grow; pay attention to that music, it runs through you and makes your skin tingle.  Pay attention – the new wine is flowing, overflowing.  We are born anew, Jesus turns existing into living.

Our birth is but a sleep and a forgetting:
The Soul that rises with us, our life’s Star,
Hath had elsewhere its setting,
And cometh from afar:
Not in entire forgetfulness,
And not in utter nakedness,
But trailing clouds of glory do we come
From God, who is our home:
Heaven lies about us in our infancy!

[Shades of the prison-house begin to close
Upon the growing boy,
Be he beholds the light, and whence it flows,
He sees it in his joy;
The youth, who daily farther from the east
Must travel, still is Nature’s priest,
And by the vision splendid
Is on his way attended;
At length the man perceives it die away,
And fade into the light of common day.]
William Wordsworth, 1807, Intimations of Immortality
Let Christ’s wine flow!