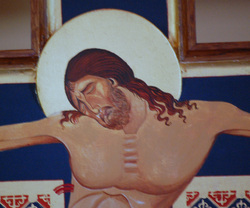 Today’s Gospel reading continues Jesus’ discourse on the Bread of Life: ‘I am the bread of life,’ he says. And in next week’s Gospel reading we’ll hear, ‘This bread is my flesh, which I will give for the life of the world.’ ‘Whoever eats my flesh and drinks my blood has eternal life, and I will raise him up at the last day.’And then the week after that we’ll hear how difficult his hearers found these words, even his disciples say, ‘Who can accept this?’

Jesus takes his listeners from earthly bread to heavenly bread, from barley loaves to himself and he pushes the ideas and language in disconcerting ways. Whereas early on he said ‘bread,’ he will later say ‘flesh.’ Where he said ‘eat,’ he will say ‘feed,’and he will speak of
his blood. Literally saying, ‘Whoever feeds on my flesh and drinks my blood has eternal life.’ You won't hear it translated that way in most English versions, I guess because most translators think it too ‘in your face,’ too direct, and too unsubtle. After all it is a pretty shocking way to put it. We prefer language
that makes the metaphor plain and not too  scary.

We can easily talk of ‘feeding on the Word.’ This is an eating that takes place by faith whenever we hear Christ’s
words and by faith take them to heart. In this way the Bread of Life in the sense of Jesus’ teachings and intentions are incorporated are incorporated into our thoughts and intentions – made part of us. Saint Augustine wrote somewhere,
‘Believe and you have eaten.’ It’s symbolic language alright, but a quite comfortable and easily accommodated way of talking about Christ and how we can come to close to him in our living. These weeks of readings from John’s Gospel,
however, take a different direction.

They give us a more difficult picture: the eating of Christ's flesh and the drinking of his blood. The language is all too
physical, and made worse by the fact that we must actually use our mouths – this is ingestion we’re talking about. Biting and chewing and tasting and swallowing. Saint John told us at the very beginning of his gospel that ‘the Word became
Flesh and dwelt among us.’ But to actually link that directly to what we do with bacon and toast and beans seems, well, almost crude.

But the flesh talk, from the mouth of Jesus, can’t be side-stepped. The eternal, divine Word became human flesh. In
him God became human, and our reason, and our hesitations, and our disbelief  mustn’t drive a wedge between the Word and the flesh of Jesus, or for that  matter between our believing and our eating, our faith and our mouth. Jesus
says, ‘Whoever eats of this bread will live for ever.’ Believing and eating, faith and mouth, the Word and Christ's flesh, –these things must be held together. Any Jesus that you cannot eat is not the Jesus who preached in Capernaum or hung on the cross – what a disarming thought!

When Jesus speaks of his flesh and blood, he does not mean an abstract description of humanity. He speaks of flesh and
blood separately. I think appreciating something of the Jewish background of this helps. Where flesh and blood are separated, there is sacrifice for sin. In the Old Testament, the flesh of the sacrifice was offered burnt on the altar and
also eaten by the communicant. The blood of the sacrifice, on the other hand, was sprinkled, never eaten. To drink blood was strictly forbidden. ‘For the life of the creature is in the blood, and I have given it to you to make atonement
for yourselves on the altar; it is the blood that makes atonement for one's life. Therefore I say to the Israelites, None of you may eat blood, nor may an alien living among you eat blood.’ (Lev 17.11) So Jesus invites his hearers to
do what for them was utterly unthinkable – to eat his flesh and to drink his blood.

This hard language can mean only one thing – only the Lord himself can speak in such a way because these commands overturn everything previously thought holy and proper. Jesus is both the ultimate sacrifice and the ultimate sacrificial meal –his flesh and his blood offered once for all on the cross as a sacrifice for the sin of the world, and as a  sacrificial meal for the sinner to eat and drink. Sacrifice and meal go together. The sacrifice was accomplished once, some two thousand years ago on the cross. The meal continues in one on-going feast every Sunday.

‘My flesh is real food and my blood is real drink.’(6.55 in next week’s Gospel). Jesus is speaking of real things, not
purely in symbols, way beyond the mundane reality of bread. Here is something more real than our restricted perceptions of reality. Jesus says that his flesh  and his blood are real food and true drink. Any attempt to soften or spiritualize Jesus' words will do violence to them. Either Jesus is speaking the  truth or he has lost his grip on reality entirely. Either his flesh is real food  and his blood is real drink or we'd better search somewhere else for what is  real. There is no middle ground, no safe symbolic hiding place, no metaphorical  shelter to hide from these words. His words are unavoidable –  un-get-around-able. They are as flesh and blood real as Jesus' flesh and blood – born of Mary, crucified on Golgotha, buried in the tomb, raised from the dead, and ascended in majesty – are real. And it is in that reality of Jesus' flesh and blood that we really have eternal life.

I can’t pretend to explain these words. We must hang our heads in shame that Christians have gone to war over ways of
understanding these things. Whatever they mean, it cannot be an abstraction that removes their sting. Indeed, maybe that’s part of it – could it be that they have such strange and disarming force in order to stop us turning Jesus into an
idea, a teaching or a philosophy. He is the real Saviour who deals with real sin and real death.

How can he give us his flesh to eat? Those in the synagogue questioned and argued. We too question. We spiritualize,
philosophize, and theologize. We categorize and rationalize. But Jesus never offers any explanations. He simply says ‘Take, eat. Take, drink, and you will live forever.’ He gives his flesh and blood to eat and to drink, not to comprehend or explain. Symbolic expression and action must not be separated from cold, hard reality.

How can this man give us his flesh to eat? The first readers of John’s Gospel must surely have smiled at the question. They
knew how he did it. He did it by taking bread into his hands on the day of his death and saying, ‘Take eat, this is my body.’ He did it by taking the cup of wine into his hands and saying, ‘Take, drink, this is my blood;’ by commanding his followers to ‘do this in remembrance of me.’ He did it by giving his flesh and blood on the cross; by rising from the dead; by ascending to the right hand of God. That's how he can give us his flesh to eat and His blood to drink. He is the crucified, risen and glorified Son of God and Son of Man. And who are we to say that he can't?

Jesus promises life to the eater. Not simply life after death, but eternal life here and now, life that will see us
through to the resurrection on the Last Day. To eat his flesh and drink his blood is to eat and drink the life Jesus has from God the Father.

Jesus promises communion with himself: ‘Whoever eats my flesh and drinks my blood remains in me, and I in him.’ Every
other food becomes our own flesh and blood. We transform it. That includes the crumb of bread and the sip of wine in the Lord's Supper. But his flesh and blood transform us. He abides in us and we in him. We are joined to him as branches
are joined to the Vine. We draw our life, our strength, our identity, our purpose from him, and he bears his fruit in and through us.

Our faith is that real; reality is what our faith is about. Feed on him: a doing of it, not a thinking about it. Real food –
real eating.

Please note: this script is based on an earlier one, the source of which has been lost. Apologies are offered to its originator and the omitted acknowledgement will be gladly given when new information makes it possible.