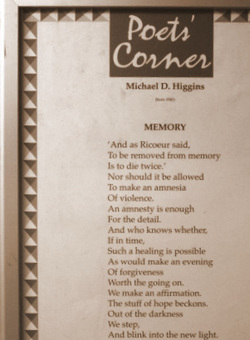 Didn't we have a lovely time
The day we went to Bangor
A beautiful day, we had lunch on the way
And all for under a pound, you know
Then on the way back I cuddled with Jack
And we opened a bottle of cider
Singing a few of our favourite songs
As the wheels went round.

But was it really the Bangor we know? No town brass band, no eels from a stall on the seafront, no Ferris wheel. Can’t be Bangor! Oh yes it can, chips in a Northern Irish voice, ‘It’s Bangor, County Down, of course (55000 population).  Altogether  bigger and more significant than Bangor, Gwynedd (14000 population). But how could you get there for less than a pound? Then another voice is heard, ‘Actually it describes Rhyl but that doesn’t fit the tune; Bangor’s just a syllabic substitute.’

Perhaps you don’t remember Day Trip to Bangor, a hit (the only hit) for Fiddler’s Dram in 1980? The song  recollects a bus outing to the seaside much enjoyed by all. Choc ice, paddling boats, a tray of tea on the sands, funfair, winning a prize, having your fortune told, taking the sea air! It’s all there; it seems so familiar – at least in our imaginations – it’s got to be a song about a real day out. It strikes exactly the right tone. This is something recollected.

‘Don’t you remember a seaside trip just like? The day Uncle Jack got his feet sun-burned at Pwllheli? Or when our Joan lost half her swimsuit during an over-enthusiastic dive at Weston’s lido? Didn’t we laugh? Didn't we have a lovely time, The day we went to Bangor, or Llandudno, or Blackpool, Minehead, ... or wherever? It’s got to be a memory – but it’s not, it’s just a song. It was written by Debbie Cook, you may have seen her name in TV credits as Deborah Cook because I think she became a script writer, and she says she had only vaguest idea about Bangor or any other place in north Wales when she wrote it. It’s a just a song – it doesn’t claim to be about anything that actually happened.  It’s not a memory.

Memory is such a powerful thing. It tells us who we are. It locates us as individuals and as families and communities. It reassures us about where we belong. It gives us direction in life – knowing where we come from helps us to know where we’re going.

But memory is so fallible. We forget so easily. We remember so inaccurately. Another song gets it so right, in the Lerner and Loewe musical Gigi, I Remember It Well: (the singers the characters Honore and  Mamita)
H: We met at nine
M: We met at eight
H: I was on time
M: No, you were late
H: Ah, yes, I remember it well

We dined with friends
M: We dined alone
H: A tenor sang
M: A baritone
H: Ah, yes, I remember it well

That dazzling April moon!
M: There was none that night
And the month was June
H: That's right. That's right.
M: It warms my heart to know that you
remember still the way you do
H: Ah, yes, I remember it well

Other people sometimes have to correct our memories because unless you constantly recall something it fades.
‘Ah, yes, I remember it well,’but I don’t really. Not unless I’m using that memory over and over:
This day shall be a day of remembrance for you. You shall celebrate it as a festival to the Lord;
throughout your generations you shall observe it as a perpetual ordinance.
(Exodus 12.14)

And so the Lord God’s deliverance of his people is made real year after year by the physical sharing of a meal and a story. And the memory never fades no matter what. That ordinance is a perpetual reminder, a mnemonic device – a tying of a knot in the handkerchief - that won’t let the Passover be forgotten or the details of its recall be altered. This is a memory that is rehearsed so that it can’t become someone else’s recollection that seems to strike a chord but actually isn’t real – a day trip to Bangor that never existed. ‘This is our memory,’ say the Jewish people. It cannot be alienated from us; we cannot be alienated from it. Just as the novelist William Faulkner said, ‘The past is never dead, it isn’t even past.’ This past lives – a constant memory that shapes and incorporates and directs.

‘What I received,’ says Saint Paul, ‘I also handed on to you.’ How many times had he eaten the roast lamb, unleavened bread and bitter herbs? Devout Jew that he was – every year of his life I’m sure. And now he talks of a similar doing of memory, a new Passover, a yet more remarkable liberation than the one he and his forebears in the faith had celebrated. Every time you do this, every time you eat this bread and drink the cup, ‘you proclaim the Lord’s death.’ The cross isn’t to be recalled as an incident that happened long ago. No, it is to be proclaimed afresh every time the bread is eaten and the wine drunk. Just like the Passover – this past lives– a constant memory that shapes and incorporates and directs.

We’ve heard it so often we forget how radical this is. Here is a new Passover; a new saving action by God that goes beyond anything you could possibly imagine. We may fantasize about something as mundane as a daytrip to the seaside. A song’s lyrics prompting and stirring our memories so that we can’t quite distinguish between what we actually remember and what we think we remember. Reality and memory becomes jumbled. I wonder whether Saint Paul’s critics thought that of him. ‘You’ve got it wrong,’ they said, ‘you’re confusing what we know to be true of Passover with the scandal of a crucifixion. That cannot be right!’ But he is insistent:‘This cup is the new covenant in my blood.’ This is what the Lord said. This is what I believe. This eating and drinking is more than a commonplace supping together – some gorging themselves, others feeling excluded – what seems to have been going on in the young church of Corinth. This eating and drinking takes the commonplace things of bread and wine and makes of them signs of that new covenant. Don’t just scoff this – anymore than you would just scoff the lamb and the herbs of Passover. The liberation, the freedom, God achieves is made real and present in these things. They mustn’t go for nothing. ‘The past is never dead, it isn’t even past.’

Jesus has gathered his closest around him for a final meal. The timing is a little different in John’s version to that of the other Gospels, but they all agree that what’s going on is somehow related to Passover whether it’s the actual Passover meal or not. There’s difference also in the account of this final meal – John doesn’t speak of bread and wine, but instead talks about the foot-washing. Different memories? Maybe; or different commentaries on what this new Passover actually is? The clouds of violence and hatred are gathering, they all know that. There’s dissension even amongst themselves – Judas feeling more and more alienated, and justifying his actions out of that sense of self-righteousness; Peter vacillating and confused, his emotions on a rollercoaster of denial, uncertainty, commitment, and folly. And the others – what must they have been thinking, feeling?

We all know the weight of a last meal. You celebrate the long years of a colleague’s working – but the jokes, and the gifts, and the shared reminiscences can’t draw the sting of the fact that all has changed, forever. Yes, emigration will bring new opportunities and exciting possibilities, but no matter what you say about cheap flights, and visits, and the wonders of Internet communications, and never forgetting –there is no going back, your lives are irrevocably altered. And what of the meals that you didn’t know at the time were going to be last meals? – Fond memories there may be in abundance but they can’t overturn the burden of loss and grief.  A last meal; a final meal.

All that and more no doubt is going on in that upper room. And Jesus says to Peter when he refuses to have his feet washed, ‘You do not know now what I am doing, but later you will understand.’ The thought is one John repeats elsewhere in his gospel, as Jesus rides into the city on a donkey, he says: ‘His disciples did not understand these things at first; but when Jesus  was glorified, then they remembered that these things had been written of him and had been done to him.’

In the happening they didn’t understand. It was in the remembering that they came to understand. Jesus loves his own to the very end, but his own don’t realize that until afterwards. It’s the remembering that stirs them into action, and the acted remembering ‘do this in remembrance of me’ that moves them on; that makes their hearts burn within them; that turns confusion and agonizing hurt into a new way of being and doing; that makes of them a serving – foot washing – community that witness to the ends of the earth; that lives a Passover life of redeemed people: ‘By this everyone will know that you are my disciples, if you have love one for another.’ The past isn’t dead, it isn’t even past.

A last meal, yes, but also the first meal of a new  community.