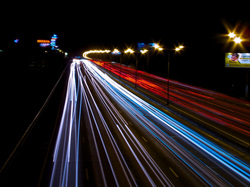 Isn’t motorway driving tedious? Three lanes and the hard shoulder stretch out before you - relentlessly the same.  Roadworks can almost be an excitement, at least something changes. I know a driver who regularly crosses  his legs, well almost, on long motorway journeys - after all, your right foot gets so tired on the accelerator doesn’t it?  When I found a brick in his car, underneath the driver’s seat, I had an inkling of why it was there!

Is that what the  prophet Isaiah means when he talks about a highway for our God? Mountains and hills are to be made low; the uneven, level; the rough  places, a plain.  That all applies to motorways.  They iron the landscape out to speed the traffic, at least when congestion or accident doesn’t interfere.  But am I alone in finding the idea of God’s coming amongst us along a macadamized superhighway a rather disturbing thought?  Like the proverbial “bat out of hell” will God zoom up behind us, flashing his lights, menacingly demanding that we move to the inside lane.  Yes, says the prophet, he will, “the Lord God comes with might,” blazing up the fast lane in his supercharged Porsche.  What a thought!

The kiss of the sun for pardon,
The song of the birds for mirth,
One is nearer God’s heart in a garden
Than anywhere else on earth.
(Dorothy Frances Gurney, 1913)

O No you’re not! says the prophet. If you want to see God coming, look for the juggernaught, horns screaming, not the bumblebee grazing the sunflower.  Years ago I  led a an open air service on a hill overlooking part of the West Midlands
conurbation near Walsall (not far from our dreaded M6), in the prayers I spoke of the power pylons, the railway lines, and the road intersections, displayed before us as symbols of God involvement in all the complexities of life. Numerous people came up to me afterwards to say they could see nothing of God in a line of electricity pylons.  Nothing?

Isn’t Isaiah asking us to think again?  To think of God in the breadth of life and death, in all its complexities, not just in the nice bits?  To find comfort in God who is tender, nursing and reassuring, yes.  But also to know that the noisy, relentless, determinedly righteous God is also our God, and we must not forget it.

Delight in the God of gentle, balmy days, the brilliant colours of the flowers turning towards the sun, shadows of clouds dancing along the hillsides.  But don’t forget the God of life crowded with speeding vehicles, the lights dazzling and disturbing through the hazy of road spray, the restless, eager journeying that focuses on getting there, and is angered, frustrated, frightened and oppressed by hazards and delays.

Where I come from, Cirencester, is at the hub of a number of Roman roads. Their origin is obvious - the Roman road builders seem to have drawn a straight line between their settlements and then built a road directly along it
without any deflection.  The road  between Gloucester and Cirencester was exactly like that. There were more and more accidents on it as speeding drivers were fooled by its straightness, and didn’t see the repeated brows that hid traffic coming towards them.  The modern dual  carriageway has removed those hazards. But don’t think the prophet’s road picture is about taking away the difficulties.  Of course, Isaiah in his vision didn’t see modern civil engineering, but he did know something about  the Roman style, the imperial style, of doing things.  The roads of his day were often about imperial power, about routes for armies to march speedily along, about who was in control and how that authority
was asserted.  God marches towards us, says the prophet, but what is different is that this is good news, not the
threat of brutal occupation:
9Get you up to a high mountain,
O Zion, herald of good tidings;
lift up your voice with  strength,
O Jerusalem, herald of good tidings,
lift it up, do not fear;
say to the cities of Judah,
‘Here is your God!’
10See, the Lord GOD comes with might,
and his arm rules for him;
his reward is with him,
and his recompense before him.

And how will this force deal with the people?

11He will feed his flock like a shepherd;
he will gather the lambs in his arms,
and carry them in his  bosom,
and gently lead the mother sheep.

God does not brutalize, does not press-gang us, does not exert authority over us, is not an occupying force. Yes, God comes  amongst us as insistent in his righteousness, in his love, as that driver behind us, flashing headlights over and over, but God is also infinitely patient - unlike the driver behind!

We should be awe-struck at the power, the majesty, the loving graciousness, the insistent justice of God, - these things
should blaze along the highways of our thoughts - isn’t it time these things straightened out our lives, woke us up to life lived in eternity not the humdrum, half-light with which we seem to content ourselves?  Yet, nothing is forced on us- we have to choose the ways of holiness for ourselves.

Here begins the good news – the gospel – says Mark the gospeller. And we hear that word “gospel” as a thoroughly religious, spiritual, specialized kind of thing.  Think again. Those for whom Mark wrote it down knew just what that word meant.   What they understood by gospel – literally“glad tidings” – was the propaganda of imperial power and overlordship.  “Gospel” was a technical term for news  of victory, especially in a military battle. Gospel was part of the eulogizing of  Caesar.  Caesar’s accession to power was gospel so celebration and sacrifices went with it.  Caesar’s commands are glad tidings; his activity amongst his subjects is good news.

When Mark takes this little word and applies it to Jesus he is serving notice on imperial power – that overweening, all-embracing, ever-intruding power that controlled every bit of the subjects lives.  As one  commentator puts it, Mark is taking dead aim at Caesar.  This gospel is subversive.  It doesn’t speak of yet another victory by Rome’s armies.  No, it declares war on the whole culture of empire. And this is good news.  The battle is on to make every part, of every life, alive with God’s love – that’s the power that makes for healing and wholeness, for life in the depth that is really being
alive.  There is urgency and insistence here that cannot be sidelined into religion.  These are major route concerns.

If God is blazing along the fast lane - then John the Baptizer must be the navvy whose  labour makes that possible – and that is just what he is in Mark’s gospel.  Here’s a beginning alright, but a beginning that is rooted in a long tradition, like those new roads built on Roman roads, something new, but the route has a long history.

The prophet Malachi, almost five hundred years before the time of Jesus, had a dream that  one day Elijah would return to herald the dawn of the kingdom of God.  Elijah, the ninth century BC man of God with his camel-hair coat, a leather girdle around his waist, who ate locusts and wild honey, who wandered through the wilderness for forty days and forty nights
to meet his God on his holy mountain.  The one who, in the power politics of his day, refused to compromise his
faith. Who stood out for the one true God, no matter what the personal cost.  And Mark sees in John the baptizer,
this messenger of the end time, Elijah recreated, the one who prepares the way, the road, by calling people to repentance. So Mark writes of John wearing a camel-hair coat and a leather belt, and eating locusts and wild honey.  Let no one be mistaken, this is Elijah, the kingdom of God is that near.

The road is made, it’s before you - turn onto it NOW. You’ve passed the sign, now’s the time for the manoeuvre, and only you can make it, you’re in the driving seat! This is the beginning of the good news, NOW - make his paths  straight!

God amongst us, we find it easy to know you in the delights of life,
the harmonies of the world, and the beauty of things and people.
How much harder it is to find you in the trials and activities of a workaday world.
Alert us to your presence in the hurly-burly of living - the crowded roads of endeavour, trouble and turmoil.
Build a highway of your grace across the wildernesses of our experiences,
that we may know nothing is beyond your concern.
Turn us to the road of your directing.