Living in the Vineyard
[This is based on the second service readings assuming that the passion is read earlier without a sermon. For the triumphal entry see here.]
Palm Sunday
Isaiah 5.1-7; Matthew 21.33-end 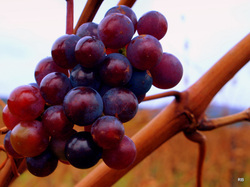 ‘Dad, I can’t have a shower until you get rid of the spider in the bathroom.’ How many times have I heard that cry? All three of my daughters have a real ‘thing’ about spiders. When I try to reason with them they always return to what a threat these creatures are: ‘Dad, every person on average swallows 8 spiders in their sleep; how terrible is that!’

I expect you’ve heard that story too. That’s a fact that just about everyone knows – except it’s completely untrue! In the early days of the Internet a journalist wanted to demonstrate how easily people believed things on the web. She took a story from a 1950s book about creepy-crawlies folklore and wrote it up as the truth; and it spread like wildfire so that is has become one of the most quoted web ‘facts.’ Actually, of course, the human mouth is far from an ideal environment for a spider so there’s no reason to suppose the creatures would ever deliberately choose it. No one knows how many spiders are swallowed in a human lifetime, but it has to be a rare event. We can all sleep without worry about choking on spiders! It’s just one of those stories.

Or, how about rats? Most of us believe, it seems, that in the UK you’re never more than six feet away from one of these rodents. The BBC’s statistical team from the programme More or Less got to work on this one. The best estimate they could come up with was 3.1 million rats in UK urban areas. If you spread them out evenly – which, of course, they aren’t – that’s around 5,000 square metres per rat. So those of us who live in towns are typically 164 feet from a rat. Nowhere near the six feet most of us believe. It’s just one of those stories.

Rats or spiders – or innumerable other stories and facts that are somehow part of the air we breathe, whether they are true or not. These are commonplace stories that are familiar to us all – part and parcel of the very way we think. The vineyard story was exactly that to the people of Jesus’ day. Everyone knew it. It had a proverbial quality to it that everyone could quote – both a delight and a challenge; a promise of hope and a statement of failure.

My beloved had a vineyard
on a very fertile hill.
He dug it and cleared it of stones,
and planted it with choice vines;
he built a watch-tower in the midst of it,
and hewed out a wine vat in it;
he expected it to yield grapes,
but it yielded wild grapes.

And now I will tell you
what I will do to my vineyard.
I will remove its hedge,
and it shall be devoured;
I will break down its wall,
and it shall be trampled down.
I will make it a waste;
it shall not be pruned or hoed,
and it shall be overgrown with briers and thorns;
I will also command the clouds
that they rain no rain upon it.

This commonplace story has power about it. When Jesus retells it including explicit reference to those responsible and adds, ‘Finally he sent his son to them, saying, “They will respect my son,’ the gauntlet is thrown down. Jesus challenges all who hear his words and see his works to recognise God’s action in them. Let the triumphal entry be the Son of Righteousness returning to reclaim God’s own vineyard. But even now Jesus knows that those shouts of ‘Hosanna’ will soon be replaced by ‘Crucify him!’

‘So they seized him, threw him out of the vineyard, and killed him’ (v. 39). Golgotha prefigured in the telling of this story. And what will the owner of the vineyard do? He will take it from those who have been so corrupt and irresponsible and give it to others.

Here’s where we have to be very careful with this commonplace story. We have to test it out – like those urban myths about spiders and rats. The easy application will be as false as those night-terrors about choking on spiders. Don’t hear a tale of Jewish depravity and Christian nobility. That lets us off the hook, and safely pushes all the responsibility onto to others.


But Jesus isn’t like that. His is not the way of safe avoidance and an all too easy shifting of blame. We have to take to heart verse 43: ‘Therefore I tell you, the Kingdom of God will be taken away from you and given to a people that produces the fruits of the kingdom.’ The only measure of the worth of God’s vineyard is if those responsible for it make its crop joyful, abundant, and available to all. God’s vineyard must produce the fruits of his kingdom. As it says in Galatians (5.22), the fruit of the Spirit of that kingdom is ‘love, joy, peace, patience, kindness, generosity, faithfulness, gentleness, and self-control. There is no law against such things.’

The ‘others’ to whom the vineyard is given are those who lives are productive of these things.

This is the reckoning – that we think we can get away with ignoring God’s call on our lives, like those corrupt tenants. Yes, God is the patient vineyard owner but his proper dues will need paying.

This the responsibility that is ours – to make productive for the good the rich vineyard of life God has given into our care. God’s good gifts are not to be squandered or abused.

This is the resourcing given graciously to us – the vineyard of our living equipped with everything necessary to fruitful life – as were the grape covered slopes of the story. We are trusted to cultivate our very selves as were those tenants of old. All is provided that our vintage might be a blessing to ourselves and others.

‘Anything downright “good,” anything that shakes you with its “trueness,” and anything that sucks you into its beauty does not just educate you; it transforms you.’ (Richard Rohr, Immortal Diamond)

That transformation is the vintage of the vineyard of God – a privilege and a joy that’s productive in all things. Let us give God the fruit that is due.