​‘This virus is not going away; this virus is really dangerous; this virus doesn’t get bored; it really relishes things if we get bored because it can cause more trouble; this virus has only one purpose, to multiply, and multiply and multiply … .‘ That was Dr David Nabarro, the WHO special envoy on Covid-19, speaking on the radio last Tuesday. He concluded, ‘… as humanity we’ve got to learn to live with it.’

Scary stuff, eh? There’s no way around it. We’re dependent on each other for a future – and that ‘each other’ doesn’t take any account of community boundaries, of old loyalties, of family differences, of nationality, or any of the other ways we have previously kept ourselves to ourselves. The old marker posts have been pulled down, and none of us know how it is going to end. Every single one of us now a star in a disaster movie not of our own making.

Scary stuff. And the thing about scary stuff is that its’s hard to control your response to it. Sometimes I feel strong and able to see it through; sometimes worried and fitfully anxious, unable to think straight; sometimes I’m profoundly encouraged by the neighbourliness I see in people, and sometimes I’m angered by the seeming carelessness of others; sometimes fear clouds my whole horizon, on other occasions an unsought-for determination steels my will; sometimes I’m just bored with it all, and other times I long for nothing on my mind. My mood swings this way and that – my emotions tossing, storming, calming, like clashing ocean currents.

And then I read this story from Matthew of a raging sea and strange encounters on its foaming waves, and I suddenly get it. Matthew’s community were as stormed tossed as we are, only for them it wasn’t a virus but the outrage of their host community determined to have an end of this upstart faith, and the violence of the imperial power that had brutalized and destroyed that host community (Were these Christians part of the reason for Roman cruelty? Some thought so.). That original band of disciples were in a remote spot on the lake precisely because they too were in fear – the miracle feeding, from which they set out onto the lake was at ‘a lonely place.’ Their fear isn’t just about being storm-tossed literally, it’s also about stormy relationships and threats for that first band of disciples, and a stormy struggle for the young church that followed to even exist. These storms aren’t going to go away any time soon.

Now Peter is something of a hero to the Matthew community and the Gospel writer isn’t frightened to portray him with all his fears and foibles. Like the others no doubt, he at first thought he was seeing things – seeing a ghost. The fear of being drowned got the better of them all. But the voice of Jesus reassured them. Take note of the specifics of what Jesus said, literally, ‘Take heart; I am; do not be afraid.’ He is invoking God’s power and presence: when Moses asked for God’s name, the answer he received was ‘I am’ and here is that name again. Jesus is recognised by them for who he is – God’s saving presence. ‘Lord,’ says Peter, ‘command me as you can command even creation.’ Command me to do as you do – let me the disciple do as you the Saviour does. There’s daring here; and faith and obedience too.
But then he falters. The disciple strives to imitate the Saviour. We strive to step out in confidence, to walk through the storms, to move on in love and hope – but then the winds of reality and threat make us falter. Our mood swings and our determination is gone. We become frightened and begin to sink. Like Peter, the waves of despair and chaos threaten to overwhelm us. And also, like Peter, we cry out, ‘Lord, save me!’

Peter falters: he doesn’t have enough faith to see him through. In fact, he won’t have enough faith even by the time of Jesus’ death. Yet Matthew tells his story. Why? Because eventually he did have enough faith; because eventually others would look to him for courage and constancy; because eventually this disciple will be the imitator of Jesus in all things; because this Jesus recognises the possibilities in our faith even when we falter.
​
With those soaked disciples, we in our drenching confusions and worry, will name this Jesus as truly the Son of God, and we will worship him who stills our stormy confusions and bring calm to our troubled souls: He says to us, ‘Take heart, I am, do not be afraid.’ 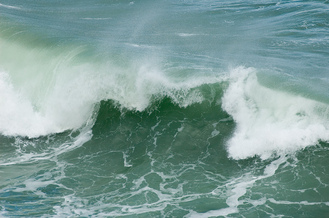 ‘The best laid schemes o’ mice an’ men;’ ‘the awkward squad;’ ‘man’s inhumanity to man.’—just a few of those phrases from Robbie Burns that remain commonplace. And what of Shakespeare? Perhaps I should let brevity be the soul of wit! (Sorry, I couldn’t quite make the exact quote fit). And what of the Authorized Version of the Bible? After four hundred years, still 'man is born unto trouble, as the sparks fly upwards.' Why do these ancient phrases stick? Why do we still use them? Surely it’s because we know the truth of them. In a few words they sum up common experience. Ancient they may be; but human life is still like that.

And it’s not just phrases and turns of expression. Sometimes ancient methods and ways of understanding something also speak across the centuries. There’s a very old way of understanding today’s gospel story that does just that, and I’ve a suspicion that this way may have been the way Matthew the gospel writer intended it to be understood.

The method I’m talking about is the symbolic or allegorical way of understanding—the method that has each part of the story as standing for something in our lived experience of faith. In this method the boat represents the church, and the winds and the waves stand for the persecutions that the early Christian community faced. The time being described is years after Jesus’ earthly ministry, so he is not with them physically; he is in heaven where he prays to the Father—being at his right hand, as the creeds have it. In the hour of the church’s need, the risen and ascended Lord makes his presence felt, and their fears are calmed and they are brought peace. This symbolic understanding lets the story immediately connect with Christians in danger or under threat.

Simply put, faith does not make life all plain sailing. Faith doesn't shield us from the hard knocks of life and death. That was the experience of our earliest forebears in the faith, as it is ours.

This isn’t to knock the faith of those earliest churches. They were people of faith, and without their witness that faith wouldn’t have come down to us. But like us, those faithful of long ago were often tested, and when faith is tested it is all too easy to think that the Lord has abandoned his people. Faith can wilt under pressure; we all know it. But our forebears discovered something vital in their hard times—even though the Lord was not with them physically, he was still with them, and he could still bring them help and peace. Hence, their faith revived, and they were able to face their trials and dangers.

The story of Peter sinking and being saved by Jesus is a strange one. Yet it represents something that really did happen to Peter. Surely it is a reference to his failure during the passion and his restoration after the resurrection.

Peter is full of faith as he sets out across the water—but this is bravado in the literal sense of the word. We remember his brave words at the last supper: 'Though I have to die with you, I will never deny you.' But then comes doubt and cowardice, and he begins to sink, so that Jesus has to rescue him. Peter stands for every disciple in every age, caught between faith and doubt.

Yes, sometimes our forebears in the faith were weak and fearful. Or to put it more directly—they were just like us. Like them we can convince ourselves that we are indeed full of faith, but when trouble comes we surprise even ourselves about how little faith we have. But also like them, it is at that point that we turn to Christ for help and find him there, even there. In our weakest moments we find the strength of God—even if we often only know it later.

Faith doesn't save us from trials and tribulations. What it does is give us strength to face them. The person who has faith has a source of strength and inspiration, especially when trouble strikes. It's not we who keep the faith. It's the faith that keeps us.

This ancient understanding of our gospel story shows us the power of faith. It shows us what Jesus always does for his people, when the wind is against them and they are in danger of being overwhelmed by the storms of life. To those with faith, Jesus is not a ghost from the past. He is the Son of God, who is present with us, and whose grace upholds us when things are too much for us.  Yes, 'man is born unto trouble, as the sparks fly upwards' but Jesus is present to his people in the storm of living: ‘Take heart, do not be afraid.’