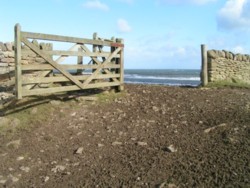 Very truly, I tell you, anyone who does not enter the sheepfold by the gate but climbs in another way is a thief and a bandit (John 10.1).

There is a very strict etiquette to gates; a rule book that you must follow because not to do so may cost dearly, or lead to death, or destroy a family’s livelihood. This I know because as a child brought up in a very rural community but near a fast railway track; I was often shouted at if I didn’t follow the rules. Some, of course, are very obvious like ‘shut the gate after you.’ It’s okay to open the gate to let yourself through but you must make sure it’s closed and fastened just the way you found it, once you’re the other side. Others aren’t so obvious – if the gate’s held open under no circumstances must you shut it. You might not realise it but the herd’s access to water is through that open gateway, if you close it disaster may follow. Where I lived that could mean animals forcing themselves through hedges or fences onto the railway line in their search for water with consequences too horrible to dwell on.

Rules also apply to climbing over the gate rather than opening it. Always climb near the hinges so that your weight doesn’t put a levered strain on those very hinges and potentially bend or even break them. The same applies to where you aim yourself if you’re going to vault the gate – not that I’ve tried that for a while! And if you’re tempted (and supple enough) to crawl under a gate – don’t – you’ll wear away the ground and encourage others to do the same until eventually animals will also do likewise. And, of course, always use the gate no matter how much extra effort it involves because to avoid it by scrabbling over a wall, pushing through a hedge, or scaling a fence has potential for damage that animals will seek out and follow.

Whatever else the metaphor means, it’s clear that it’s about Jesus as the single entrance to the community of the faithful. We can only be part of this flock by going through this one gateway – and in that is our security and our protection. There is no other way in. Jesus is the very gate itself. The strength and clarity of that image is, I think, obvious. But that isn’t the only thing this images means. Jesus, the master of parables, uses metaphor in a rich and involving way that encourages his hearers to think long and hard about the images he uses. He requires of us that thinking because it makes us part of his people. We are involved in using his thoughts; musing on his meanings; and engaging with the pictures he himself has given us. His story-telling style is one that asks effort on our part so that we can live within the images and symbols that he thought important. He speaks in a way that deliberately draws us closer to him. He makes us active participants in his telling, his living, of salvation. We are never just the audience.

An English lad got himself a summer job working on one of the Canadian Great Lakes – it was a real adventure for him. Of course on the application form he had to answer certain questions about his suitability for the job. When it came to the vital one about whether he was able to swim, he wrote: ‘Yes, I learnt the motions of swimming at my secondary school.’ Inevitably the day came when he fell off his employer’s motor boat. There followed wild splashing and shouting. He was clearly in trouble and had to be rescued. When on the lakeshore he had recovered from his ordeal he was asked about his answer on the form. ‘Yes,’ he said, I learnt the motions of swimming at school but I found them hard to put into practice.’

And indeed they are! You can only learn swimming by swimming. Knowing the motions helps, but that’s no substitute for getting wet! It’s the difference between ‘knowing about’ and ‘knowing.’ This is why the Jesus method of teaching requires of us practice. He doesn’t tell us about living faithfully; instead he asks us to know faithful living from the inside. It’s not ‘You might compare my place in our company to something like a gate,’ but ‘I am the gate.’ It is as easy, but also as engagingly complex, as that. ‘Work out your living with me as the gate,’ says Jesus. Take this image and make it part of your living.

Don’t only know about the motions – like the lad and his swimming. Don’t dwell on the theory, as essential as that might be sometimes. But rather let the image, the symbol, the story become the lens through which you see your living of the faithful life. You can't get faith ready to wear, off the peg. It’s not a system you can be drilled into. No, faith is an adventure of heart and mind where you write the script that utilises the ideas, the images, the symbols that Jesus provides. Jesus, the master parabolist gives us enough material for a lifetime and more.

‘I am the gate,’ says Jesus. That’s a place to begin. Standing at that gate I wonder at how to pass through it – what the gate rules are and how I should observe them. Listen to these people – these are genuine exchanges:

‘Christopher I've had enough – I can't be doing with this nicey, nicey in meetings and then back-biting and criticism behind people’s backs. It makes me wonder what it’s all about.’

‘Vicar, I think my days are done – won’t the Lord take me soon – I’m in such pain, they're trying to poison me, if only my dear mum could see what has happened to me.’

In varying circumstances I was being told in clear terms that a way through was needed. Did I have imagination and empathy enough to help to find that way through? I don’t know – but I do know that hearing the raw emotion burning in those declarations I knew that no glib word of direction or advice was enough. What was being looked for was an opening of a gate through which those individuals might pass so that they could come to a different place. A way through is what was needed. Helping each other to a way through – to the way through, is our witness as people of faith. And the gate rules are compassion, care and grace.

You would expect me to say that the ways to go through the gate are the routes of religion – faithfulness in prayer, in receiving communion, in working with the scriptures, in the giving of effort, time and cash to godly purposes. And that is certainly the case – these are tried and tested pathways – but the Jesus way of engaging us in his saving life does more.

The image of the gate asks of us effort, imagination and personal involvement. We are to find the gate and pass through it. Jesus is the life, we are to live in his way and dwell in his truth, that we may live his risen life. That means knowing these things for ourselves, not knowing about them. One of the things the resurrection of Christ means is that all the old criteria of judgement no longer apply – the ultimate criterion of death is no more.  We are to be a people who measure things by the resurrection life of Jesus – let there be an end to cynicism and despair. We need each other to keep that measure bright and usable. Knowing each other; sustaining each other; bearing with each other; encouraging other; learning of each other; supporting each other – in joy as well as trouble. We need each other to see each other through the gate.