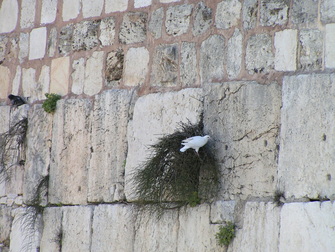 Western Wall of the Temple Mount, Jerusalem.
In his autobiography, Long Walk to Freedom, Nelson Mandela describes his long years of imprisonment on the barren rock of Robben Island. He tells how one day he was called to the prison’s main office. General Steyn was visiting the island and wanted to know from Mandela if the prisoners had any complaints. Badenhorst, the officer in command on the island, was also present. Now Badenhorst was feared and hated by the prisoners - he had a reputation for unbending harshness.

In a calm, but forceful and truthful manner, Mandela informed the visitor about the chief complaints of the prisoners. But he did so without bitterness or recriminations. The general duly took note of what he had to say, which amounted to a damning indictment of Badenhorst’s regime.  The following day Badenhorst went to Mandela and said, “I’m leaving the island.  I just want to wish you people good luck.”

Later he said, “I was amazed. He spoke these words like a human being, and showed a side of himself we had never seen before. I thanked him for his good wishes, and wished him luck in his own endeavours.”

Mandela says that he thought about this incident for a long time afterwards. Badenhorst had perhaps been the most callous and barbaric commanding officer they had on the island. But that incident revealed that there was another side to his nature, a side that had been obscured but that still existed.

And Mandela concludes, “It was a useful reminder that all men, even the most seemingly cold-blooded, have a core of decency, and that if their hearts are touched, they are capable of changing. Ultimately, Badenhorst was not evil; his inhumanity had been foisted upon him by an inhuman system. He behaved like a brute because he was rewarded for brutish behaviour.”

The incident speaks of many things: the responsibility to speak out honestly; challenge without vindictiveness; having the courage to take action when you can; what makes for reconciliation; and more. And those things are also all in those words from Matthew we’ve just heard. Even the very first Christian community had to be reminded of these things - they were all too human, we look at them through rose coloured glasses, but no, they needed advice about dealing with relationships when things went wrong.

Here's Jesus dealing with things that apply to the most everyday elements of shared lives:

Healing broken relationships is a priority for Jesus. Jesus says:  "So, if you about to offer your gift to God at the altar and there you remember that your brother or sister has something against you, leave your gift there in front of the altar, go at once and make peace, and then come back and offer your gift to God" (Matt 5:23-24). We don't hear the strangeness in that command. In Jesus' day, worshipping God was considered to be so important, and the rules that governed worship were so rigid that no one would ever consider leaving in the middle of worship! The act of offering a sacrifice was about as solemn an act as there could be. But here Jesus does the unthinkable – his instruction is to leave worship and see to the relationship as a priority. As important as making a sacrifice in the temple was, reconciliation is even more important. Jesus said that the most compelling evidence that would convince the world that Christianity was real and true was the way his followers loved one another (John 13:35).

But what if it’s not my fault? What if it’s the other person’s fault? What do I do then? Jesus says, "If you remember your brother has something against you, (that is, if it’s your fault that your relationship with another person is strained,) then you go at once, (take the initiative), and make peace". And he also says: "If someone sins against you, (that is, if it’s their fault that things aren’t going well between you) then you go to that person....!"

Whether we like it or not – when a relationship breaks down, regardless of who is at fault, Jesus puts the burden on us – on you and on me – to initiate reconciliation. He does that because you and I have experienced the reconciliation that is ours through the death of Jesus. We know what it is to feel the relief and joy of knowing that the gap between God and us has been closed because of what Christ has done for us. And we have to live that reconciliation in our own lives.

The Jesus way of doing that is practical and has a profound realism about it. Try to set the matter straight in private he says. How wise that is. Don’t go sounding off about, that will only make things worse. It’s only if the private approach doesn’t work that others are asked to help – and notice the careful steps advocated here. Try to work it out within a spirit of reconciliation – try and try and try again. This is how it should be, and this comes directly from Jesus. How often we fail in these basic, godly steps?

I’ve been driving for a long time, but I have to admit that not all manoeuvres come easily, even after all these years. In particular, parallel parking! It was a very small space and a narrow road, so it took me a while to get into it. Evidently that didn’t please the driver behind me, and he felt he had to share his feelings with me. As he accelerated past me he yelled through his open window, “What’s your problem, you *** ***?” His hand gesture reinforced the point! He asked a reasonable question, but he didn’t stay to discuss it. You might say he recognised the problem and addressed it to me in private! But there was no effort to repair a broken relationship. He only wanted to let me know what he thought and move on quickly. That’s all of us, too often – let rip, and move on! But Jesus will have none of that – work it out, he says. That’s what you must do.

If you have any hesitations about the power and the cost of that, then this Eucharist sets our thoughts right again. Here we are shown how far Jesus will go to repair our relationship with God. Even though the breakdown between God and us was our fault, he didn't wait for us to come to him, he took that costly first step towards us, sacrificing his life on the cross so that we might be reconciled to God.

If you want a text for this sermon, then let it be some words of Pastor Martin Niemoeller (1892–1984), who protested against Hitler's anti-Semitic measures in person to the Fuehrer, was eventually arrested, and then imprisoned in a concentration camp for years (Sachsenhausen and Dachau 1937–1945):

He said, “It took me a long time to learn that God is not the enemy of my enemies. He is not even the enemy of His enemies.”