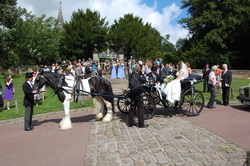 “Why ever did we say we’d go,” and he curses as he struggles to remember how to tie a bow tie. “It was your idea so there’s no getting out of it now,” she replies unsympathetically straining at the zip of the silk frock she hasn’t worn for months. Parties can be fraught. One you’ve looked forward to for months can turn out to be awful; another you drag yourself to only out of politeness turns into a great evening that’s over too quickly. If you’re the host, there’s the worry of getting it right, and the horror if something goes dreadfully wrong. The embarrassing incident that someone videos isn’t always so funny if you’re the one trying to make everyone feel comfortable. Or perhaps it’ll be the one that everyone remembers: “Didn’t we have a lovely time ...” Parties—fraught and fragile or fun-filled and fantastic (funtastic!).

It’s interesting then, how often parties of one sort or another figure in Jesus’ teaching and life. This one is definitely at the fraught end of the scale. It starts off promising enough—this is to be a real hum-dinger of a party; lavish in its provisions; a celebration of love—a feast, a real feast, for a wedding. Yes, that’s what the Kingdom of God is like—a humdinger of a party that marks something wonderful in human experience. Everyone can understand the joy of that. This is one to look forward to: you’ll buy the full new gear for this, this is something so special.

“I’ve just got married myself so I can’t be troubled by your son’s wedding.” Actually that’s an excuse from Luke’s version of the story, but it makes the point. The excuses are feeble or even insulting, a real slap in the face.

What is going on in this? The story takes place in society where things of honour and status relationships count in every circumstance. It’s the invitation of a king. If we think about what comes with the invitation, or what those invited thought came with it, we might get near what’s going on. Think of those royal progresses we see in film dramas about the Tudors—what an honour it was to be invited to the royal court, but the downside was that with the invitation came the obligation to host Queen Bess if she decided to return the courtesy. Entertaining the queen for a week could bankrupt you and your family!

Is that why the parable’s guests make their excuses? They’re afraid they will have to ask the king back. That’s why their fear is so deep it turns to violence—they ‘seized his slaves, mistreated them, and killed them.’

The king is enraged. Surely on two counts—first, the murder and the violence against those who are his emissaries; and second, because the guests were so calculating in their initial responses. There is no hint of reciprocation required in the invitation; the king’s intention is wholly about joy and celebration but they refuse to accept that. He is offering to come close to them; to share all his joy, but they will not have it. They are determined to keep their distance, whatever the cost.

To the first audience hearing the story it’s plain enough. We’re invited to the king’s party – but most refuse; refusing to see in Jesus any invitation, and they will eventually mistreat and kill the one who is the son and the emissary amongst them. And they will do the same to the son’s followers who keep the invitation before them.

And Matthew the gospeller turns the story again so that a new audience can hear its power. A generation or two after Jesus’ death Matthew sees the destruction of beloved Jerusalem at the hands of the imperial forces. This is desperate and disastrous – hardly a stone left upon a stone – and Matthew and his people are devastated. But the parable of Jesus has all the more power now: ‘The king was enraged. He sent his troops, destroyed those murderers, and burned their city.’

That’s the consequence of making light of a royal invitation. Making light of such an invitation is devastating. But what is lost to the invited is now given to the people of the streets – those with no position to guard, no worries about protecting themselves or their honour – simply ready to enjoy what’s offered. God’s kingdom is like that. That, however, is no reason to gloat over the misfortune of those originally invited—far from it—and that’s where the last detail of the parable, the incident about the wedding garment, comes in.

Some have thought this a kind of stray story that Matthew has stitched, as it were, on to the original parable, but I don’t think so. Yes, the bad and the good are there at the great celebration but they aren’t simply left to the state they are in – good or bad. When the king actually comes amongst them they need to be clothed with the results of his generous invitation. They need to be clothed with ‘the cloak of righteousness’ as the prophet has it (Isaiah 61.10). Yes, they’ve come in off the street in their workaday dress, but once the party is in full swing, when the king’s there himself, something more is required.

In other words there is still a choice to be made. Don’t gloat over those first unfortunates. They were calculating instead of being open to receive. And that calculation did them no good. You have received open heartedly but you must make sure the gift touches your heart and soul. Turn receiving into response. Don’t let the invitation go for nothing – there’s no time to be lost, dress yourself in the joy of the party – live its celebration in righteousness and grace. The king will be here soon – be ready for the party.