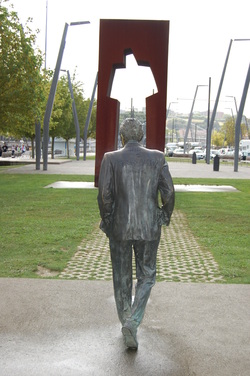 I stand before you contrite and dumbfounded. I have to tell you that I've got it wrong. That the gospel has come as a shock to me - again! That's what Jesus does. Time and time again. I rest easy, thinking that God's ways are clear and obvious; that really I've got it taped; that it comes down to what is reasonable, to what fits, to what I expect. Then bang! There's a shaft of light brighter than any firework and suddenly I realize I'm in the dark when I thought I was in the comforting light. It’s all too easy to make God fit my outlook on the world.

The gospel sheds a light that's startling, unexpected, different, disclosing, sometimes shaming, profound, liberating, that comes as a new thing — literally gospel — good news. Again and again it says ‘You're in for a shock.’

The great Bible scholar Walter Brueggemann started a sermon once like this: ‘I have news for you. That a new world is dawning in the mess of this broken world.’ Startling stuff, but surely he’s exactly right when it comes to God active among us.

There’s ‘news’ here in this parable – something new and different in the story and the way it is put. Something that is all too easy to overlook because the story Jesus tells can be made to fit a way of looking at the world that comes easy to us. Usually it goes something like this:

This is a story about using the abilities that God has given each one of us in the very best way each of us can. Using well what we’ve been given will improve not only our own lives but also the lives of people around about us. If waiting eagerly for the Lord is part of our discipleship then doing what we can to the very best of our abilities while we wait is an obligation on us. Discipleship is never an excuse for resting on our laurels – use well the talents you’ve got.

I’ve taught this story in just that way many times, but I think in doing so I’ve missed the point. That way of treating it makes it an easy parable. The thing about Jesus the parabolist is that that the stories he tells are rich in possibilities. Sometimes they are easy, like a comedian’s ‘one-liners’, but often if you pause to think they provoke all kinds of profound insights that demand an attention deeper than what’s easy. And that is just what the parable of the talents requires of us.

Think about it. Who is the Lord in the parable? He’s a thoroughly nasty bloke, that's who he is. He is the one to swan off to a secluded hideaway in the Maldives while his minions are left to struggle on. He is the absentee overlord who takes full advantage of other people's labours and exertions. He is one whose wealth is so great that recession means nothing to him. Why should he worry? He has his millions. He is tyrannical, harsh, and unforgiving; it’s there in the third slave’s justification of his anxiety, he says, ‘I knew you were a harsh man, reaping where you did not sow, and gathering where you did not scatter seed.’ He knew him as a man determined to exact as much as he could for as little effort as he could.

You see we've got to get out of the mindset that sees the Lord in this story as some kind of benevolent capitalist - a kind of first century Cadbury or Rowntree. We have to try to think ourselves into a Palestinian peasant in the ancient world long before our economic system came into being. The categories that operate in this parable are quite different from the ones we understand, quite different from the ones that render this parable easy.

Be clear that this parable focuses on money, not skills or abilities.

When Jesus says talents he means a unit of money - a talent was a quantity of precious metal weighed out on a balance. This is about money, and what money! My Study Bible says each talent represented as much as fifteen years of work for an ordinary labourer. So the first slave gets wealth equivalent to several lifetimes of work; the second a lifetime or more; and even the third is charged with riches way beyond any labourer’s actual experience. Whatever else this story is about it is certainly about vast wealth. This is big stuff in a world where all resources were very limited.

As the scholars Malina and Rohrbaugh point out, a first century peasant lived in a world where all goods were experienced as strictly limited. They had no sense whatsoever of economic growth as we have The notion that there is only so much and it has already been divided up meant that seeking more is always wrong because it meant someone else had to lose. The honourable thing was to maintain what you've got, to seek neither loss nor gain. In this way of looking at the world acquisition by its very nature is stealing. So Saint Jerome in the fourth century wrote, ‘Every rich person is a thief or the heir of a thief.’

In such a peasant world the rich had the power and capacity to take whatever they wanted and the poor had no defence or recompense. Power brought wealth, and those who were powerless were always vulnerable to the rapacious greed of the powerful.

These are the facts of the social world from which the parable comes: a tyrannical overlord, huge sums of money, and a view of resources as limited. Read the parable again in light of those facts.

The first two slaves are determined to get a slice of the action. They act just like their overlord. From the peasant's point of view they were robbers who co-operate with the oppressor’s extortionist schemes. This shamelessness is rewarded by the overlord on the day of reckoning - like him they were vicious enough and ruthless enough to take full advantage of others.

The third slave, on the other hand, did what a responsible free person would have done. He acted honestly because he refused to participate in the rapacious schemes of the overlord and his kind. He did the right thing – according to Malina and Rohrbaugh later rabbinic law said that burying a deposit was the safest way to care for someone else's money.

Of course from the overlord's point of view the third slave is a lazy good-for-nothing so the money he has safeguarded is taken from him and given to the one who embezzled most. Just as every powerless peasant knows - those with more get more and have it in abundance, while those with nearly nothing have even that taken away from them.

And what is the Jesus’ take on this commonplace story? That the corruption of the world is plainly visible to God: a world in which the poor get poorer and the rich get richer. Jesus gives it to us explicitly in verse 29: ‘to all who have, more will be given, but from those who have nothing, even what they have will be taken away.’ In other words, ‘the rich get richer, and the poor lose everything, no matter how meagre those things. Yes, the one who does right will often be condemned; and illicit gains and crooked dealing will often go rewarded. But awake sleeper! For a new world is dawning in the mess of this broken world.

If you've got any doubts that this is the Jesus perspective, read what comes immediately after: the story of the separating of the sheep and goats (Matthew 25.31-46). That parable says final judgement will not be on the basis of wealth or even religion, but rather on whether we saw to it that the least of our sisters and brothers, prisoners or free, had food, clothing, and care.

In today’s parable the one condemned is the one who did the right thing. The slaves who exacted as much profit as they could are those whose final condemnation is sure. Perhaps you think this a fanciful interpretation - well it goes right back to Eusebius, Bishop of Caesarea at the beginning of the fourth century.

This is news. We shouldn't be like the overlord in the parable because the world in which people like that come out on top is passing away. Grasping self-preservation that stamps on others must not be our way. God's kingdom is coming and God's will is to be done on earth as it is in heaven, as Jesus taught us to pray. In that is our security and hope.

Acknowledgement: this account of the parable is based on Bruce J Malina and Richard L Rohrbaugh, Social-Science Commentary on the Synoptic Gospel (2003, 2nd edition), Fortress Press, Minneapolis.