Why do you look for the living among the dead?
Easter Day
Luke 24.1-12 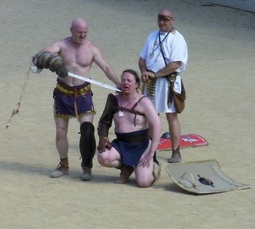 “This is nonsense,” they said. “You need to get your head straight, Callistus, save your money.  [You know, even after all these years, I still sometimes don’t realize its me that is being called by that name]  “You’re making a fool of yourself,” they said. I understood their surprise.  Something unbelievable had indeed happened.  I wasn’t my old self at all.  I was no less amazed than those who had had a go at me.  What a turnaround.  If you’d asked those years ago - well, I couldn’t have conceived it. The anger burned in me then.  It touched everything I thought about, everything I did, every waking moment, every conversation.  I was like a man possessed, they said.  Somehow I was going to get my own back, somehow I’d make them pay, that horrible death wouldn’t go unavenged.  They’d see, they’d see, I was out to get ‘em.

Some thought my reaction extreme. “He’s not coping with his brother’s death,” they said.  “They weren’t close, were they?  All those months when his brother was on the road.  They hardly saw each other - didn’t seem to be much love lost there, a great age difference after all.They never seemed close.”

He was my BROTHER.  What did they know?  Yes, there was a great age difference, but that was the point, you fools.
He was the child of our mother’s teenage years.  Mum and Dad were hardly married when he came along.  He was a man, eighteen years old, by the time I was born.  And that’s the point, you see, I was only two when Dad died, my big brother was Dad to me then.  They know nothing of those years when I was growing up.  My big brother!  Sure, he was never at home in those months before it happened.  Well months, years really, three or so as I remember it.  But before then, he was everything to us.

He was clever, he was quick, he knew how to do things.  Without him we would have gone to the wall.  Mother couldn’t cope - too many of us to feed.  He was a hard worker, and good with money.  He knew the value of things, and could eke out the smallest amounts so that we all had something to eat.  We depended on him.  Where would we have been without him?  Heaven only knows.  But we got through it.  We survived as a family - and it was all down to him.  Yes, we grew apart with age - but I can’t forget that all of us owe our lives to him,  my brother.

No one should have to die like that. You bet your life I was angry.  At first, I wanted to murder those who were responsible.  I don’t exaggerate, if one of them had crossed my path I could have strangled him with my bare hands.
But nothing like that happened.  Instead I felt so sad that I could hardly do a thing.  I sat about for hours - I couldn’t think, I couldn’t respond.  his nothingness just came over me in great waves. This picture of my dead brother just kept coming at me.  I couldn’t get the sight out of my mind.  A great black cloud of misery weighed on my shoulders.

That’s when it came to me - to get away, to start afresh, to go somewhere where nobody knew me.  Perhaps my big brother’s talent had rubbed of on me - but it was never going to come to anything if I stayed at home.  So I just upped and left.  Not even a goodbye, I just walked out, made for the coast, and got a place on the first ship that would allow me to work my passage.  It was going to be a new me - but how could it be with a name like mine, that made it all too clear where I came from?  So I stopped using Joses as my calling name, and became Callistus, a suitably common Roman name I thought, that gave no clue to my Judean origins.

So that’s how I  eventually got to Notium.  I used the weeks on the ship to my advantage.  I hadn’t realised how much money could be made in simple trading, but I soon caught on.  I promised to find a better price for this, or a new opening for that.  And little bit by little bit, I traded a profit, and shippers and merchants got to know me, trust me.  The stories I could tell - but that’s beside the point.I had a reputation - hard but honest.  So people came to seek out Callistus -  I was a fixer, a negotiator.  I always made sure I got my cut.  They called me “driven,” and so I was.  My brother’s terrible death was the thing that spurred me.  Years of effort made me rich, but all that work was for one thing only, that I could avenge what had happened to my brother.  Then came my chance.

The authorities were having a purge. They were rounding up folks they wanted rid of - the riff-raff, the beggars, the thieves, those who spoke of rebellion.  And amongst them were people who followed the Galilean.  Oh, he was long dead too, but for some weird reason people who claimed some kind of allegiance to him were everywhere.  And that was my golden opportunity.  Many of those rounded up, simply disappeared.  But if you are willing to pay, a more sporting way could be found.  And that was me, paying for the gladiators sport, so the cursed followers of Jesus could be carved up, literally, in the stadium.

Let their blood flow, like my brother’s did.  I would make them pay for my brother - I Joses Iscariot would avenge.
They had pushed him to suicide, they had lost him to us, their lies had been his down-fall.  So I was there, in the crowd, watching my money being spent well. Shouting for more - let them die, like my dear brother, LET THEM DIE!

And they did, in droves.  And I turned away, not satisfied, - just sickened.  Death, and for what?  Did the spilling of
blood, warm my blood?  Did their cries, silence my cry?  Did their anguish, cure my anguish?  Was this life, or living death?  All those years I had lived for that day - lived for death.

From somewhere deep inside me a remembrance flickered, something from the scriptures read in
synagogue years ago:

I have set before you life and death, blessings and curses - Choose life!

Choose life, but how?  I have lived with hate for so long, I don’t know what else there is?

So here I am, having made a crazy journey for a purpose I can’t begin to explain.  I’ve come from Notium to Ephesus.
I’ve come to find his followers, the ones they now call Christians. I’ve brought cash for them, cash that might have paid gladiators.  Yesterday they let me into their meeting for the first time - it reminded me of synagogue in my childhood - singing, and reading, and speaking God’s praises.

One thing read struck me as particularly strange.  It was about the days after my brother’s death, when Jesus had been crucified and buried.  The women of the group, I recognized the names for several of them had been my brother’s friends, came to the grave, and found the body of Jesus gone.  They were told he had risen from the dead.  The women were amazed, perplexed, troubled - and those they told about it, thought it nonsensical.  Strange. As nonsensical as me being here. My colleagues back at the harbour were right enough about that.

And yet here I am.  Seeking to be amongst those I had thought my greatest enemies.  Looking for the figure of a person, of a God, who isn’t swallowed up by death and hurt, who overcomes corruption and harm, who, they say, lives in his
people in such a way that they too overcome those things.  They say they live the resurrection of their Lord. They sing the praises of a love that never ends.  Of a God who shares human pain, and makes it possible for humans to share a God’s eternal hope.  They sing the praises of a fragile little thing like love, because, they say, in every circumstance it offers the chance of life made anew.  Every circumstance?  Will it be so for me, when I tell them who I am?  Will Callistus the shipping agent, who paid for the gladiators of death, find new life with these people?  Will Joses, the brother of Judas from Kerioth, be freed of vengence and find his life again?   Shall I find myself again?