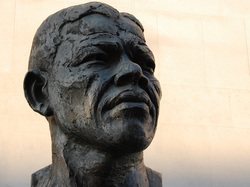 ‘We are going to emancipate ourselves from mental slavery because whilst others might free the  body, none but ourselves can free the mind. Mind is your only ruler, sovereign. The man who is not able to develop and use his mind is bound to be the slave of the other man who uses his mind.’

So said Marcus Garvey, the Black Pan-Africanist activist and orator in a speech in Canada in October 1937, but I suspect you’re more familiar with the words in this form:
[Extract from the beginning of Redemption Song by Bob Marley]


Old pirates, yes, they rob I;
Sold I to the merchant ships,
Minutes after they took I
From the bottomless pit.
But my hand  was made strong
By the 'and of the Almighty.
We forward in this generation
Triumphantly.
Won't you help to sing
This songs of freedom
'Cause all I ever have:
Redemption songs;
Redemption songs.

Emancipate yourselves from mental slavery;
None but ourselves can free our minds.
Have no fear for atomic energy,
'Cause none of them can stop the time.
How long shall they kill our prophets,
While we stand aside and look? Ooh!
Some say it's just a part of it:
We've got to fullfil the book.

Voted one of the top twenty political songs of all time, and regularly featured as amongst humanity’s greatest songs, Marley sang of awakening and of empowerment by God despite the despair of slavery and its legacy – Redemption song indeed. If you get anything of Marley’s heartbreaking yet hopeful message then you’ll get something of what Mark was writing about: ‘Don’t’ be led astray; life isn’t defined by the horrors of war or rumours of war.’

Just like Marley, Mark’s words are written out of genuine experience. He doesn’t imagine what might be; he actually describes what is, and asks what difference Jesus makes. He writes from the heart and from life.

Mark, I think, experienced war at close quarters. In June of the year 66 an insurrection against Roman rule began in Jerusalem. The Roman overlords, and those who were their quislings, were thrown out. The Romans  retaliated, but remarkably the Judean nationalists forced them back. By now the rebellion had spread and despite the power ranked against them the Jewish nationalists held their own and held their breath. They even set up their own government – though its power and authority was challenged again and again by different factions within the rebel groups. The Romans fought back again and this time retook Galilee easily, but because of civil war in Rome itself the assault petered out. It wasn’t until the spring of 70 that the Romans began their final assault on Jerusalem.

Those were the signs of the times Mark was asking his readers to read. Some Jews thought what was happening were indications of the very end. Others called for a patriotic response that could finally drive the Romans out. But for Mark neither response was realistic or godly. Another cycle of violence was beginning, that was clear, but there’s no redemption song in violence. ‘Watch out,’ says Mark, ‘Don’t be led astray.’In all this fervour – claims from one side and the other – in all this stomach churning raw emotion, fear, desperation, and despondency – Mark’s people, the little church, had to
find a better way.

And in looking for and living that better way they came in for a lot of stick, indeed downright hatred and persecution. A bit later in the chapter he writes about being arrested and beaten, and having to give an account of the Jesus way before the authorities. He didn’t use those words metaphorically – these things were happening. No wonder Jesus is asked about
times and signs. Mark looks back to Jesus’ life so few years before and seeks in what Jesus said and did some answers for this anxious little community in danger of being snuffed out as violence crashes around them.

Hadn’t Jesus said, ‘Don’t let yourself be sucked in?’ Many will try to lead you astray. They will claim that death and destruction  will put an end to the old corruptions and let something new come to birth. They will claim that these things will put an end to horror, but it’s not an end they offer, only the beginning of yet more hurt and blood and loss. Don’t be sucked in. Read the signs of the times. The Jesus way is to look for signs of redemption, and not to be fooled by the pressures of popular expectations – seek redemption songs.

So Mark’s words aren’t some strange code or esoteric escription, they are words born of painful realities. Temptation went in two directions: like others the fledgling church could be impressed by the grandeur of things – as they came out of the Temple they exclaimed, ‘What large stones and what large buildings.’ So solid, so big, – what this building represents is
unshakable and we are so puny in comparison. The church has often been tempted in this direction – after all what are cathedrals for but to make you feel small? ‘No,’ says Jesus, ‘Do you see these great buildings? All will be thrown down.’
The power that seems so immovable is actually a shame. And for Mark’s community  that was no symbol. The temple really was broken down, destroyed by the triumphant Romans as they exacted their revenge on the rebels in the year 70.

The other temptation was to join those who thought that  that inevitable revenge could be stopped if enough people joined the anti-Roman  violence. Violence they thought could be their salvation – attack the enemy, do as much damage as you possibly can, exact blood for blood, life for life. Give as you get – kill and maim and destroy. If we can’t stop them, then at least there will be nothing left of any worth that our enemy can exploit. ‘Don’t be  fooled that this can bring a true end – it’s only a spawning ground for more trouble, only the beginning really. There has to be a better way: as the Letter to the Hebrews has it, ‘Let us hold fast to the confession of our hope without wavering.’ Mark and his little community had found ‘a new and living way’ (Heb 10.20), and whatever was going on around them, it was to that new way that they had to cling. Look for Redemption songs even in a world of despair.

That’s our business: ‘There shall be a time of anguish’ (Dan 12.1), and in those times ‘the wise shall shine like the brightness of the sky,’ and they will lead many to righteousness. Seek redemption songs; that’s Mark’s encouragement to us. The real end, which is God alone, is so often hidden  from us in this living history of ours, but we are the ones who are to dare to  name the signs of the times of God in this messy and messed up world. Like Mark,  square up to all that speaks of death and chaos and say, ‘I am not fooled, hurt and destruction shall never have the last word, there is always a better way, the Jesus way.

Like Mark and his people we hear, we see, we are touched by dreadful things – sometimes at a distance, and sometimes actually. Blood-letting in Gaza and Israel; sudden death stalking the villages and towns of Afghanistan; claims and counter-claims in Syria and the escalating body count that goes with them; communities where youngsters have no prospect of ever
having a job; once wealth societies where those with chronic illnesses find it ever harder to source the drugs on which they depend to live; famine or its threat – those without water and those with too much; a bus load of little
children destroyed by a train; scandal; abuse and corruption – and I’ve only  touched the first page of the web news site. People have so much to cope with – in all kinds of ways. This is our world – all too near what Mark was describing.
Don’t be fooled: hold fast to hope. That must be the sign of our life in Christ. Not make believe, but reality seen in a new way, a real awakening – and an awakening that changes things.

This week I heard the story of someone who had been affected by the floods here in the UK earlier in the year. Her house – her home – was her pride and joy and had never flooded before. She was away at the time and there was no mobile signal where she was – so she had no notice to rescue things that were precious. They were all ruined by the water. The house still hasn’t dried out and the builders and insurers argue about how it might be put right. Meanwhile she lives in a bedsit waiting for the possibility of return to her home. She said she felt trapped – unlikely now to ever be able to resell her
house, worried that the increased insurance may be beyond her, and scared stiff every time it rains. She ended, by saying something like, ‘I bet you now wish you’d never asked me how I felt.’ I hope the ready listening she receivedconvinced her otherwise. A first step in rekindling hope is taking the time to listen to one another – with openness, with compassion and without interruption. A staying with that doesn’t offer glib responses but demonstrates, however tentatively, the possibility of a way that sees things through.