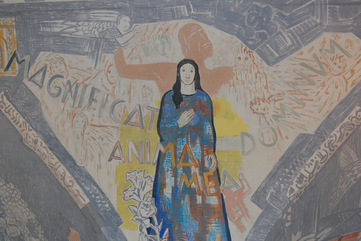 Too many 'virgins' conceive; that's the problem. According to government figures recently published[*] although the under-18 conception rate in
the UK is at its lowest level for 20 years it still compares very unfavourably with other Western European nations. Teenage conceptions in the UKare
running at nearly 40,000 a year, and almost 7,500 of those are to girls under 16 years old. The government regards teenage pregnancies as a major factor in
social exclusion. The geography of deprivation, poor education, no skills, and poor housing matches teenage pregnancies exactly. An under 18 year old is four or five times more likely to become pregnant in Manchester than in Dorset.  Some recent research suggests that of sexually active teenagers, most lost their virginity at 15. Too many 'virgins' conceive; that's the problem.

Our faith tradition guards the uniqueness of the new beginning that is Christ by reference to the virgin's womb. We use that idea to assert the absolute prevenient grace of God, as the theologians put it. In other words, when Matthew the gospel writer echoes Isaiah’s naming of Immanuel – ‘God with us’ – he does so to emphasise the fact that this is God’s action.  ‘The Lord himself will give you a sign’ as Isaiah puts it. This isn’t about biology anymore than it is about social causes and consequences of pregnancy. The virgin’s womb is the marker of all the action being God’s. In Matthew’s teasing and allusive language, God gives birth to Christ through the womb of Mary. That isn’t a million miles from those verses in John’s Gospel that have  ended countless Carol Services:
“No man hath seen God at any time,” says the Authorised Version, “the only begotten Son, which is in the bosom of the Father, he hath declared him.”
Or as the version we use has it, “the only Son who is close to the Father’s heart, … has made him known.”
The word used there could just as well be translated as “womb.” The Son who comes from the Father’s womb is born from Mary’s womb. The doctrine of the Incarnation will have nothing to do with the idea of it being a product of our seeking after God. The first move always comes from God – if it all depends on us, our actions, our intentions, our strivings – then we are fools, pity and disillusion our currency.

Alone, alone, about the dreadful wood
Of conscious evil runs a lost mankind,
Dreading to find its Father.
W.H. Auden

No, dread is not to be our lot. God acts. Here we take our stand with the saints before us. The Christmas we celebrate is a totally new beginning - born of a virgin.

Yes, I too will guard the truth of the first move always, but always being God's; but those 15 year olds, so recently virgins, require of us a theology that is  thoroughly incarnational, not anaemically spiritual. The Word became flesh, but we are constantly perceived as trying to reverse the process - turning flesh into mere words.

The young woman is with child. What could be more of flesh –– of the yearning and aches of desire, of tender love or impulsive urge, of pain and fatigue, of soaring joys and wearying confusions, of wondrous power or of anguishing
powerlessness, of surging hope and disarming relentlessness, of changes that envelope and overpower a mother to be? A young woman said to me, "I felt my body was no longer my own."

With every second that passes more than four people come to birth - 247 babies a minute. Let not the uniqueness of Christ's birth blind us to its commonness. What I'm trying to get at is that alongside the prevenient grace of God we must always hold on to the condescension of God. St  Augustine called it the humility of God. In blood and pain God enters our common life, to make it holy through and through.

The great Karl Barth put is like this, 'What is Christian is secretly but fundamentally identical with what is universally human.' With Dietrich Bonhoeffer we can boast of Emmanuel, the Christ - of him alone is it really true that nothing human remained alien to him. Of this man we say, "This is God for us." All of us!