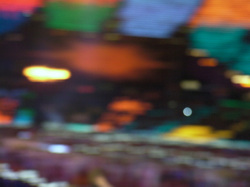 The word of God is living and active, sharper than any two-edged
sword. (Hebrews 4.12)
I was at a conference and this lady who was a stranger to me said, “The Women’s Institute is a Christian organization.”  No, madam, it is not!  Nor is the Town Woman’s Guild, nor the Royal British Legion, nor the Scouts, nor the RSPCA – nor a 1001 other worthy organizations.  Every single one of them worthwhile and of great benefit to their members and wider society, perhaps founded by Christians, perhaps with many members who are Christians, but Christian organizations they are not.  To
describe them as such is to claim that Christianity consists of what is worthy, good, sociable, altruistic and beneficial – and it does not.

As Christians we may have much in common with those around us – indeed it would be a great worry if we didn’t.  We may be members of notable local organizations and good causes – and again it would be a real concern if we weren’t.  I
hope we would all rejoice in trying to be good neighbours, in trying to get on well with people, and in trying to advance the social good.  We should be open, approachable, helpful, sympathetic – keen to have friends and acquaintances from all areas and walks of life. But that said we are an odd people.

We are the odd ones out – not only because we are here rather than having a long leisurely breakfast or being on our way to the Cheshire Oaks shopping mall or even being at work.  Not only those things, but because we are a marked people, marked with the sign of the cross and conscious of it.

Unity, solidarity, is made much of.  Yes we are at one with all humanity in its needs longings and hopes, and that’s as
it should be, but there is also another side to our faith.  The Christian faith has a cutting edge to it which separates us and marks us off.  We are different.  Not in rather vague ideas about goodness and neighbourliness, but in our commitment to Jesus Christ; our conviction that through him something very special, indeed unique, has happened and is happening.
Something which alone can give the full breadth to life and to living. Jesus' words seem to add to the impossibility - the imponderability of it all - 'For mortals it is impossible - but not for God.'

Those around us often don’t see it – we are an odd people.

The temptation is to try to hide it.  I don’t want to be the odd one out, and I never have.  That childhood/adolescent urge to be part of the group, part of those who belong, part of the in group, never really leaves most of us.  It is so hard to stand out, to be marked out.  To be different through and through, not just on the surface.

The word of God has a penetrating quality to it that cuts to the very heart of me – the very heart of you.  Try as we may we cannot avoid it.  And once we’ve caught a glimpse of God’s face in Jesus Christ, a glimpse of heaven as it were, then nothing else  has quite the same attraction, though sometimes we are fooled into thinking it might.

The Israelites making their journey through the barren and dreadful desert came to think that being marked out was a terrible thing.  According to Hebrews some decided to join the ways of other peoples nearby and turn their backs on this awesome God who required of them this terrible journeying.  They didn’t want to be an odd people.  And the consequence: abandoning their God they never came to enjoy rest in a new land.

It’s picture language, but it’s accurate.  It’s all too easy to stray off after other gods when being the odd ones out comes hard.  But generally for us those other gods are how we spend our time and what we do with our money.

Commitment to Christ can be so shallow and half-hearted.  My mind wanders in the prayers, I’m very reluctant to concede that worship is work it requires all of me, I take Holy Communion for granted, I’ll only tolerate what suits me.

Who am I fooling?  Those around me?  Myself? But not God.  The sharp edge of his word judges me and my motives.  An odd people and a known people. There is nothing that can be hidden from God.  Our translation of scripture gets it exactly right we are “naked and laid bare” before God. There is nothing, not a thing to hide behind.

Like standing out as a Christian this also is something I prefer to avoid. Being known in my nakedness can be frightening experience, and certainly a shaming one.  No Gok strategy will make this nakedness look good.

Think about your longstanding friends.  Yes, they may know some of my guilty secrets.  Yes, they may have experienced the more unpleasant foibles of my personality.  But there is still more of me that they don’t know about.

Think of your spouse who knows you better than anyone.  In all your nakedness if you like.  But there is still more of you that even that person doesn’t know.  If that wasn’t the case then those shocking instances when someone commits something terrible that appears so out of character would never happening.  But they do happen because every single one of us knows someone to whom just that unimaginable thing has occurred.

There are always parts of you, parts of me, held back from others – even almost held back from ourselves.  But God knows even those things.  Shamed or guilty, despairing or heinous, embarrassing or tragic, God knows.

With those people we really trust the hidden things that we will admit work towards building relationships.  The thick and thin of things can add strength to a marriage, friends are friends because the relationship has weathered storms of rows and neglect.  There is an acceptance without any pretence that helps us grow as people.

And such is the way with God – acceptance without pretence – no more games, you can’t hide anything from God; God is not fooled by the outward show. God’s discernment penetrates to the inmost core.  John was in a terrible state – the drink had got to him. He wanted to end it all, but this one thought stopped him committing suicide – the thought that
God knew him through and through and therefore his damnation was certain.  The anguish was justifiable, but John had fearfully misunderstood the character of God--

Our High Priest, Jesus, who stands at the very throne of God, is the one who sympathizes with our weaknesses – all
of them!  He doesn’t hold what he knows of us against us.  No, he stretches out his arms on the cross of our subterfuge and vacillation in a posture of welcome and acceptance:

This, this is the God we adore,
Our faithful, unchangeable friend;
Whose love is as great as his power,
And neither knows measure or end.

The word of God does indeed cut its way through all our show religion, through our paraded benevolence, through our  shallow commitment – piercing to the very heart of our genuine feelings, motivations and guilty sins.  We are known – but not known so as to accuse and condemn, although such it is we deserve (if we are honest).  Rather we are known so as to be accepted and received, to be borne up, supported, strengthened, forgiven.  This is the God we adore – the one who is ready to accept – the only hesitation is on our side.

The great 20th century theologian Paul Tillich – a great theologian but a flawed person – put it this way:
The courage to be is the courage to accept oneself as accepted in spite of being unacceptable... this is the genuine meaning of the doctrine of 'justification by faith'.  And again,‘Sometimes at that moment [of despair] a wave of light breaks into our darkness, and it is as though a voice were saying: 'You are accepted. You are accepted, accepted by
that which is greater than you...'

So then in penitence let us admit our reluctance to stand out as odd people – our falling prey to the temptation to treat our faith as a club.  Admit our fear of being known –truly known – all our avoidance and subterfuge. But be ready also to admit with joy that we are accepted and loved by God.

Let us be brave, then, and approach
God’s throne, where there is grace.
There we will receive mercy and find
Grace to help just when we need it.