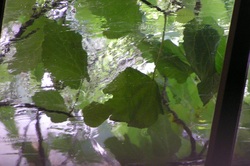 He was applying the dead dog principle, or is it the dead donkey? I can't
remember, but anyway the idea is to make sure your vine is really productive,  when you plant it new it should be buried over a dead animal. It turned out to be a principle too far.

He had to persuade his wife that it was a good idea to plant a vine against the wall – she had envisaged something more directly
ornamental. Against her better judgement she finally agreed. A local nursery was visited, a vine procured. Then came the first problem. Inadvertently closing the car boot too soon he managed to chop off the top of the plant.

Outside their front door, a high wall marked the garden boundary. The wounded plant was placed on top of the wall, awaiting planting. Was it the wind, was it a child? Who knows?  But when he eventually came to plant the vine, it had fallen off the wall, it's a stem split in two. Well, in fact just a little stub of a stem remained attached to the roots; the leafy bits were completely useless.

That's where the dead dog principle comes in. His wife said he made such a mess of the plant that he might as well bin it. But no, he said, he'd plant it, and try to give it a life-giving boost by putting plenty of bone meal underneath it, – a good organic fertiliser, not quite dead dog, but maybe near enough.

And so he did. Unfortunately, the family Labrador couldn't distinguish between a bone and fertiliser. When next they looked out of the kitchen window, the playful puppy had disinterred the unfortunate vine and was throwing it into the air and catching and shaking it apparently in the hope that it might turn into the thing of which stank.

Let me not labour of the story. The now soil-less stump was rescued and planted again. And it grew, and grew and
grew! – producing the most beautiful lush foliage and each year a presentable crop of small sweet grapes against the Cheshire brick wall that was its home.

The vine was a lesson in itself. It is too easy to think of this vine image as referring to something that is terribly fragile, difficult to maintain, needing lots of effort, exotic, and in need of protection. Those are the last things a vine is.
Isaiah, Jeremiah, Ezekiel, Hosea and the Psalmist all use the image of the vine, and the picture almost always is of degeneration in the sense of unruly growth. Vines grow with a vigour that is simply stunning. Jesus takes this common image of a common thing and turns the metaphor, rampant growth here isn’t the wild ramblings of a briar, the hedge that runs amok. No here, the new growth, the different growth, is reaching out, it's shooting spurts, not in disarray, although that's how it might seem, but in fruitful hope. Yes, it goes in all directions, it won't easily be constrained in its’ search for sun and water and nutrients. As long as it's connected somewhere to the core, that's enough. On a vine the fruit is always on the new growth.

So often I heard the image of the vine used in a constraining way, defined the plant in a neat topiary, its margins clipped and uniform. But the vine grows on, defying our well ordered logic, chasing away towards the sun, eager to produce what is  sweet, and abundant with life. Get the Jesus emphasis in the picture.

Near Rome, I’m told, there is an order of nuns who run a hospital which is free and open to anyone in need, whatever is wrong with them, and no matter what race or creed they are. The nuns wanted to make plain to any foreigners passing that way that their help was available to all, so they had signs put up at the gate in various languages – the one in English reads “nuns harbour many diseases, and have no regard for religion.” The translation was strictly accurate, but it
didn’t translate what the holy sisters had intended.

That is constantly our problem as people of faith. We struggle with the language, trying to get it right, trying to make the faith attractive, relevant, engaging. In comparing himself to a vine in today's gospel reading, our Lord is working with an image which was a very familiar one to the Israelite nation. This comparison had been drawn so often that the vine had become the symbol of the Jewish nation and was even the emblem which was stamped on the coins of the Maccabees. The picture was so familiar, but Jesus turns it with a new emphasis.

When the symbol of the vine is used in the scriptures, it invariably has a negative tone and is linked to the idea of the degeneration of the vine. Isaiah and Jeremiah both berate the people for not obeying the word of God and for falling from the high moral standards which God had set for them. In essence, the vine has grown wild and is in desperate need of pruning or cleansing. The Jews were tempted to believe that their Jewish heritage would be enough to save them. But Jesus is saying that the only thing that can save them is to be joined to him. Jesus was setting forth the principal that the way to salvation was through faith in him, and not Jewish blood. And this is a positive thing, not something that constrains.

We often say that you know someone by the company they keep. Those who mix with a positive crowd will do good. Those who hang out with a bad crowd will probably do not good. We absorb and mirror the values of the groups to which we belong. So it is with Jesus. If we remain with him, then we will do good, but apart from him, we can do nothing.

Our Lord says in this passage that the fruitful branch does two good things with his life: first of all, the branch’s own life
is enriched by contact with Jesus; and secondly, that contact brings glory to the Father. The greatest glory of the Christian living is to bring glory to God through the believer’s life and conduct. Jesus must be at the centre. If we are rooted in him, then we will be rooted in love, because God is love. Let’s think of one aspect of loving relationships – friendship.

We could probably go on and on about the qualities of friendship: trust, reliability, mutual enjoyment, steadfastness, encouragement, equality, forgiveness, and more. I'm sure that you could add a few characteristics of your own. But we could probably reduce all of those qualities to one word: Love.

A story is told of former US President Harry Truman, near the end of his life. After he left office in 1952, he moved back to his home in the town of Independence, Missouri and returned to the life of an ordinary citizen. He was a man of routine and many mornings he would take a walk with his neighbour, a Presbyterian minister. They developed a friendship. The minister tells of a cold, February day late in Truman's life. The minister was officiating at the burial of an elderly
gentleman. It was cold, the wind was blowing and no one was there for the service. But just before the appointed time, Truman's car pulled up, by that time driven by a single Secret Service agent. Truman got out and slowly walked,
with the help of a stick, to the grave side. With only President Truman in attendance, the service began and ended quickly. On the walk back to the car the minister looked at Truman and said, "Mr. President, why are you here? You
shouldn't even be out!" Harry Truman looked at him through his very thick glasses and said, "Pastor, I never forget a friend." In that way, Harry Truman was like his Lord. Jesus never forgets his friends. And that means that Jesus will never forget us either. Joined to him we are joined for good.

Unless one is a part of Christ's body, the Church, one can indeed do nothing. So many people tell us that living needs no reference to God at all, but I ask myself does that absence of acknowledgement make people happier or more loving? I can’t say that I see it. While we Christians are generally a shy and retiring lot, I still see the presence and power of God in the lives of many Christians I meet.

That said, of course the presence and power of God can be seen in the lives of those who do not count themselves as Christians, but who do seek to respect and honour others. So when I say the "Church" I mean that part of the
visible Church which expresses respect and honour for all, and what you might call ‘the invisible church’ who hold dear similar values and attitudes. We mustn’t be quick to exclude people in the name of Christ.

Jesus talks about "abiding in him", and so we must ask where is the risen Jesus? Not just sitting on God's right hand (giving him pins and needles!). The risen Jesus will be found in precisely the same places as Jesus during his earthly ministry – out
and about – in the house of Simon the Pharisee and accepting the small offerings he received there, as well as in the house of Simon the leper and accepting the overflowing offerings he received there. So the true faith community is the
community which loves beyond its own borders, indeed ideally one which has no borders at all. If we are to "abide in him" – we should at least be where he is, and that is not just "in Church." He is risen, and cannot be entombed in any sort of building – literal or metaphorical.

The essence of the Church is not that we are right; but that we are open to the contributions everyone can make to our fellowship – eager to grow other branches, to incorporate people into the vine. Ready to willingly and eagerly answer the question ‘what is to prevent me’ – just as was Philip. As we do this, we bear the fruit that God intends and become “his disciples.” It is when we are open to accept others and grow together that we will find the truth in Jesus' words "whatever you wish ... will be done for you." John 15.7.