A Song Pregnant with Hope
Fourth Sunday of Advent C  Some general Advent/Christmas starters are here.
Micah 5.2-5a; Luke 1.39-55
NB This script was completed prior to the recent tragic deaths at Sandy Hook School - it is offered here as a lectionary sermon that preacher colleagues may or may not feel appropriate to these sad days. 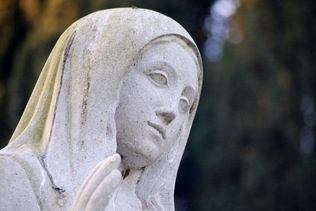 Elizabeth exclaimed with a loud cry, ‘Blessed are you
among women, and blessed is the fruit of your womb.’ And that exclamation added onto Gabriel’s greeting (Luke 1.28): ‘Hail Mary full of grace, the Lord is with you,’ has been used as a prayer regularly repeated by Christians since at least
the eleventh-century. Indeed at one point English law required that our forebears should commit this prayer to
memory.

A second part of the prayer, that didn’t come into popular use until the sixteenth-century, asks for Mary’s prayers for the one praying.  So completed, the prayer runs:

Hail Mary, full of grace.
Our Lord is with you.
Blessed are you among women,
and blessed is the fruit of your womb,
Jesus.
Holy Mary, Mother of God,
pray for us sinners,
now and at the
hour of our death. Amen.

For hundreds of years the prayers of Mother Mary have been associated with God’s mercy. If God has often been drawn in stern terms of justice and judgement – Mary has frequently provided the counterbalancing appeal to the more homely and comforting aspects of faith.  The popularity of the ‘Hail Mary’ signifies the attractiveness of her tender heartedness and caring motherhood to countless believers. And not just believers either – look up Pavarotti on the Internet singing ‘Ave Maria’ and you’ll find the comments of many who have been moved to tears – non-believers as well as the faithful. Here is a confidence in the qualities of motherhood from which we all draw comfort.  That confidence is made plain in the
meeting we celebrate today – the aged Elizabeth, at last pregnant after so many years of longing, and the pregnant peasant girl Mary exalting in God her Saviour.

Those things are true, but hold alongside them a simple historical fact. It was only in 1827 that the human ovum was discovered.  In other words, what we take to be an absolutely incontrovertible fact of human biology has been widely acknowledged for less than 200 years. The key role of a woman in the processes of conception is something unacknowledged through most of human social history.For generation after generation of our forebears, the basics of pregnancy were incredibly mysterious and puzzling.  As indeed they were to Mary, Elizabeth, Zechariah, and Joseph. An inexplicable pregnancy probably did not have earth-shattering significance for any of them, for every pregnancy was in many respects inexplicable.  Two thousand years of Christian history – words used in devotion, over and over – Ave Maria – coupled with modern science can obscure the realities of this encounter between Mary and Elizabeth.  We hear these two women as exultantly confident, but it can’t have been like that.

And then there’s the other Mary associated text – Mary’s song, Magnificat.  You know those calculations you do in idle moments – well I calculated how many times I've said, sung or listened to pregnant Mary’s Magnificat – as of yesterday it amounts to a minimum of 12,000 times.  I began taking the Daily Office seriously when I was sixteen.  I am steeped in that kind of Bible use that the Old Testament scholar Walter Brueggemann calls 'traditioning' – letting the words of the biblical
tradition indwell you through use, through repetition; allowing that vital life-blood of faith words to enables us to inhabit the alternative that is God's vision of what is. Feel it, inhabit it, live in it, before you give way to wholly rational and analytical categories.  In faith terms Scripture needs to be known prior to being known about.

We have to constantly remind ourselves not to domesticate this tradition that is quite other to our ordinary
inclinations.  We have to let the Bible read us; it’s not all about us reading it.  Familiarity dulls us to the
extraordinary in it.  Do you remember the cinema-goer interviewed when the award –winning film Titanic  was all the rage who said he had no intention of going to see it as he “knew how it ended?”  His problem is ours when it comes to the Christmas story.  We know how it turns out.  We can’t recapture the shock of God coming in the flesh to show us what
real life looks like. Magnificat can seem‘old hat.’ It’s not news to us anymore, so how can it be good news?  But if we are faithful in traditioning we will hear it as good news.

And Biblical scholars underline the point – Mary’s song, Magnificat, can’t be just the words she used that day when Elizabeth greeted her.  You see they rely on the words of the Greek version of the Hebrew Scriptures, a language that a Galilean peasant girl would not have known.  Luke the gospel writer is certain that these sentiments are appropriate
to Mary, the mother of the Saviour he loved, but they are words written in the light of the resurrection.  Think of the words again: ‘He has filled the hungry with good things, and sent the rich away empty’ speaks of Jesus’ministry rather than Mary’s pregnancy. Or again, ‘He has brought down the powerful from their thrones, and lifted up the lowly’ seems to refer to the exalted Risen Lord rather than the peasant mother who is going to continue to live in humble obscurity for at least the next thirty years.  These are words that know the revolution Jesus achieved. Be alert to their force and their comfort.  Let these words live in you; let mother Mary’s voice be heard in your voice, let these ideas be the fertile ground from which you draw life.

In the Nuremburg War-crime trials a witness appeared who had lived for a time in a grave in a Jewish graveyard, in Wilna, Poland.  It was the only place he – and many others – could live, when in hiding after they had escaped the gas chamber.  During this time he wrote poetry, and one of the poems was a description of a birth.  In a grave nearby a young woman gave birth to a boy.  The eighty-year-old gravedigger, wrapped in a linen shroud, assisted. When the newborn child uttered his first cry, the old man prayed: ‘Great God, hast thou finally sent the Messiah to us? For who else than the Messiah  himself can be born in a grave?’

We have become insensitive to what the theologian Paul Tillich called the infinite tension between the reality of Jesus’ death and the joy of his resurrection, between the horrors of the world as it is and the hope that we maintain.  But the old
gravedigger, he knew the tension.  He knew that only the Messiah can bring birth out of death. This is no natural, everyday happening; this is the new reality that has appeared in Christ.  The Christ must die, must be buried, in order to be the Christ; the one who conquers death.  This is not an inevitably happy ending, like some fairy story.  That’s why we must see Mary and Elizabeth’s meeting as a commentary on the resurrection.  A sword does pierce Mary’s own soul, her Son dies and is buried, but the answer of Easter becomes a possibility precisely because of the reality of that horrifying, destroying event.  The promises of God made to Abraham are firm and true, as Mary’ song declares.  She, along with her kinswoman Elizabeth, will know that in all the turmoils of life the mercy of God is to be trusted.  This is the resurrection experience. This is Easter – in Christmas.

Hail Mary, full of grace, Our Lord is with you.
Blessed are you amongst women and blessed is the fruit of
your womb, Jesus.
Holy Mary, mother of God, pray for us sinners,
now and at the hour of our death.
Amen.


Acknowledgements: this script draws heavily on two books: Paul Tillich, The Shaking of the Foundations (SCM Press 1954)and David Brown, The Word to set You Free (SPCK 1995).