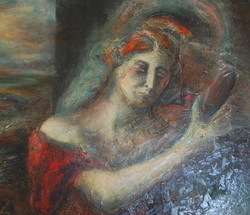 In the village in which I was brought up there was one  piece of woodland that was out of bounds – needless to say that as a boy it was one of the places I particularly liked to go – getting in without being seen a great adventure!  It was a very dense mixed wood and what drew me was a formal pond in its centre – a sudden space of light amidst the undergrowth.  Generations earlier a place of recreation, but now over grown.  The surface of the water covered in weed.  But despite the weed great expanses of large leaves and and on occasion muddy brown-green buds.  That’s where the miracle happened – just the right depth for water lilies.  The muddy-greenness exploded into a vast array of brilliant blooms.  The chaos of unkempt growth gave way to a vast spectacle of delight.  The place clothed in rare beauty.  The old piles of tumbled trees, tangled brambles, moss, and pond made place for something altogether spectacular. Delight in the tangles.

When the disciples got to the tomb on that first Easter morning what they saw were piles of old clothes. Mary didn’t even see that much. She was too distraught. The moment she saw the door to the tomb standing wide open, she ran to tell Simon Peter and the other disciples that Jesus’ body had been stolen. They beat her back to the tomb and found that she was right, at least about his body being gone.

Only why would grave robbers have bothered to undress him first? Without even going inside, the beloved disciple could see the linen wrappings all lying in a heap. When Peter went inside, he saw more. The cloththat had been on Jesus’ head was rolled up in a place by itself. Odd, that someone should go to all the trouble of rolling it up.

None of it was making any sense to them, John says, because no one who was there that morning understood the scripture, that Jesus must rise from the dead. Still, when the beloved disciple followed Peter inside the tomb and saw the clothes lying there, he believed. Believed what? John does not say. He simply believed, and without another word to each other he and Peter returned to their homes.

As Barbara Brown Taylor some where puts it, that is a mighty fragile beginning for a religion that has lasted almost 2000 years now, and yet that is where so many of us continue to focus our energy: on that tomb, on that morning, on what did or did not happen there and how to explain it to anyone who does not happen to believe it too. Resurrection does not square with anything else we know about physical human life on earth. No one has ever seen it happen, which is why it helps me to remember that no one saw it happen on Easter morning either.

The resurrection is the one and only event in Jesus’ life that was entirely between him and God. There were no witnesses whatsoever. No one on earth can say what happened inside that tomb, because no one was there. They all arrived after the fact. Two of them saw clothes. One of them saw angels. Most of them saw nothing at all because they were still in bed that morning, but as it turned out that did not matter because the empty tomb was not the point. He had outgrown his tomb, which was too small a focus for the resurrection. The risen one had people to see and things to do. The living one’s business was among the living, to whom he appeared not once but four more times in the Gospel of John. Every time he came to his friends they became stronger, wiser, kinder, more daring. Every time he came to them, they became more like him.

What happened in the tomb was entirely between Jesus and God. For the rest of us, Easter began the moment the gardener said, "Mary!" and she knew who he was. That is where the miracle happened and goes on happening --
not in the tomb but in the encounter with the living Lord.  That’s why Mary of Magdala is the inspiration for us – like her we are surprised by the living Lord.  We never know where he will turn up next –but when he does, like Mary we must greet him with joy.  Delight amidst the tangles of life.