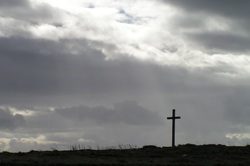 I got to know that man some 15 years later.  He was still a person of enthusiasm, keenness and drive - but his enthusiasm now was for heavy pornography on his home video.  He rejoiced at being known as the bloke
on the estate where he lived that should be called on to get some extra-  explicit, 'raunchy' he would call them, films. He was porno-king on the little estate on which he lived.  He was the leader amongst the boys who liked a broad-minded laugh - his words, not mine -  he was never seen in church.

But don’t let me give you the wrong impression Charles didn’t abandon his faith in favour of sex movies.  No there had been umpteen things in the meantime: cooking, cordon bleu of course, with all the gadgets he could muster; model making, models as big as your front room - hours, months, years of effort - but of no value to him once the enthusiasm waned.  When I knew him he was into citizens’ band radio - and he was certainly into it, gadgets, jargon, aerials sticking out of everywhere!

Is Charlie so different from any of us? His tastes in their more perverse manifestations may not be ours, but the wavering,
wandering commitment, the soon past enthusiasms, is a common enough feature of all our lives.  One way or another,
we are a fickle people, though we like to pretend we are not.

Cast your mind back to Palm Sunday. The palm strewn entry into the city seemed like a triumph.  Robes and cloaks  carpeting the road.  A crowd in front and a crowd behind.  A popular leader for the mob. The whole multitude … began to praise God joyfully with a loud voice … saying, "Blessed is the king who comes in the name of the Lord! Peace in heaven, and glory in the highest heaven!"  Enthusiasm yes, understanding, no.  And the enthusiasm itself was so short lived - cheers soon became condemnation, blessing turned to shouts of “Crucify.”


They didn’t understand.  Once they had wanted to make Jesus king by popular uprising and acclaim.  He was quite clear what that meant - he had to send the disciples away and dismiss the crowd.  No easy task I’m sure because their blood was up.

Those close to him didn’t understand either. When Peter announced Jesus as the Messiah, Jesus had to reaffirm with all the vehemence at his command that he was not a Messiah of war but a Messiah of service and suffering.

‘Are you the king of the Jews,’ asks Pilate. And Jesus’ response amounts to, ‘Well, that’s your way of putting it, but the kingdom I rule isn’t like anything your mind, your power, or your language can envisage. Christ rules, but when we see his
kingly glory we see that he is ‘pierced’ as that vision from Revelation has it. Christ is envisioned as riding on the clouds of authority beyond that of the earth – and he is there because of the cross, not in spite of it. The one who reigns has the marks of torture on him – he was pierced. And Revelation will echo Daniel’s imaginings. The one who rules has‘dominion and glory and kingship’ – this kingship extends over all and will never be destroyed. But it is always a kingship that carries the marks of the cross.

What kind of king?  That was the question.  Jesus’ answer to the question meant death as a condemned terrorist, though no one believed it was true.  In a mock trial evidence was twisted and politicians conspired to discredit and remove a leader whom they feared.  Pilate says, ‘Your own nation and the chief priests have handed you over to me.’ Conspiracy is in the air. Malice is evident at every turn. And Pilate, the ultimate arbiter, simply plays a game – a  murderous game. And so Jesus died.  No one came to save him.  His last cry was met by silence.

What kind of king?  That’s the question to us.  We keep the Feast of Christ the King -  a day instituted by Pope Pius XI in 1925 as a ‘double of the first class,’ that’s liturgical jargon for a feast day that is especially important. The day the compilers of the ecumenical Common Lectionary have adopted as the closing celebration of the liturgical calendar.  Christ the King - to my mind a rather difficult title now, society has changed radically since1925.  One sub-editor I used to
work with would never let the expression ‘Kingdom of God’ remain in any manuscript I sent her.  As a feminist, she always, but always, changed ‘kingdom’ to reign or rule.

What kind of king?  That’s the question to us. Was Jesus’ answer mistaken? He is the Prince of Peace who gives himself into the clutches of violent people with no hint of retaliation or evasion. Many, many think his way foolish. To the question, will force alone achieve change and bring about improvement?  Many sincere people, many people of principle, many people of faith have answered yes.  Yes, only force will change things.

What kind of king?  That’s the question, and it’s not just a political question, it touches the heart of our own faith:  Do we trust Jesus’ choice of messiahship, his estimation of what God is like?  What we do and say so often points otherwise.
Church communities are not generally marked by their difference from secular organizations. Power and self-interest too often appears to rule.The forces that apply elsewhere all too easily apply here, but Jesussaid, ‘My kingdom is not from this world.’ His rule finds its source in an altogether different place – ‘other worldly’ not in the sense of avoidance but rather as radical difference.

HH Farmer tells somewhere of how, as a young man, he once preached on the love of God.  After the service an old Polish Jew who had become a Christian came up to him and said, “You should not preach on the  love of God until you have seen, as I have seen, the blood of your dearest loved-ones flowing in the gutters on a gray winter’s morning.” Farmer later asked him how he could believe in the love of God after that. The old man replied that at first he could not.  But then he
came to see that he was faced with a choice.  Either the cross was true and God’s love was real - or he was left alone with total despair.

The choice the old man had to make is the choice we have to make.  What kind of King?  Our enthusiasm if it is Christian faith will be a clinging to the cross.  Our faith will be in a king who rode a donkey along a palm strewn way to
a tortured death on a cross. The only power behind this throne is the power of self-giving love - that is the reign of  Christ.