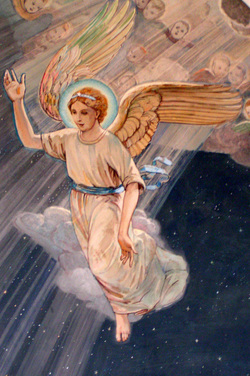 It was shocking on two counts: not just that I had never seen a man with his socks held up by suspenders before, but also that those suspenders were fastened around red flannel long johns.  I guess I was eleven years old at the time.  I was at the British Legion’s Christmas Party, and Mr Bateman’s underwear had been brought to light in a forfeit dance.  The old soldier gamely danced on, his elastic and red flannel displayed to all!

Christmas memories.  We all can bring to mind memories of Christmas past.  Uncle Charlie who thought it fun to remove the pepper pot from every house to which he went, replacing it with one he had borrowed from a visit at a previous house.  Did they all ever get back to the right
houses I wonder?  Or that Christmas day when Aunty Becky got exasperated at constantly losing in the after lunch game of cards and in her vexation threw her hand on the coal fire.  That was the end of any games that day.  Or that Christmas Eve when my Granny and I were responsible for overseeing the roasting of a huge leg of pork that was to be the cold treat on Christmas Day. Cards come into it again.  So engaged were we in Gin Rummy that we didn’t notice the smell from the kitchen.  The thermostat on the cooker had gone and the leg wasn’t so much burnt as actually burning.  We won’t go into what was said when my parents returned.

The gospel writer John tells us that Jesus came to his own, but his own would not accept him.  The babe born amongst his own, was of them, kin of their kin, sharer and bearer in and of their memories, yet somehow not recognised as such.
And it’s all there even in the Christmas story – the shepherds recognise him, but then they were pretty much outsiders; the magi recognise him, but they are foreigners.  His own don’t recognise him, indeed the king in those times fears him as a threat and has children murdered to wipe out that threat.  Joseph and Mary flee with the child in order to save him.

For those around Bethlehem in those days the memories were harsh and bitter. Memories of weeping, and hurt and loss. And our Christmases bring that too. So as the smiles come with fond remembrances, have a thought too for those for whom this season brings memories hard to bear – the families of a hundred plus soldiers who won’t be returning from Helmand, the widowed who keep the day alone, the seriously ill and the frail struggling to be joyful, the disillusioned and those at odds whose memories seem never to heal, the outcast and the abused who long for something better.

As always it was late; as always this was our final call. The snow had a fine crust upon it, and the old trees sparkled like tinsel.
We grouped ourselves round the farmhouse porch. The sky cleared, and brought streams of stars ran down of the valley and away to Wales.  On Slad’s white slopes, seen through the black sticks of its woods, some red lamps still burned in the
windows.
Everything was quiet; everywhere there was the faint crackling silence the winter night. We started singing, and we were all moved by the words and the sudden trueness of our voices.  Pure, very clear, and breathless we sang:

As Joseph was a walking
He heard an Angel is sing;
‘This night shall be the birth-time
of Christ the heavenly King.

He neither shall be bornéd
In housen or in hall,
Nor in a place of Paradise
But in an ox’s  stall....

And 2000 Christmases became real to us then; the houses, the halls, the places of Paradise had all been visited; the stars were bright to guide the Kings through the snow; and across the farmyard we could hear the beasts in their stalls.
We were given roast apples and hot mince-pies, in our nostrils were spices like myrrh, and in our wooden box, as we headed back to the village, there were golden gifts for all.

And as I hear those words, the memory is mine as much as Laurie Lee’s. Except in my remembering the farmer was old Joe Reade, and the stars directed our sight not to Wales but to the clump of trees miles away on Marlborough Down.
One of the remarkable things about memory is that others’ memory can become my memory, your memory.

We gather at this communion table to remember Jesus.  ‘Do this in memory of me, he said.  And we do, and the encounter with Christ, the Word that is life, is as real as it was for those first disciples called together to be the church.
Their memory, our memory.  And we are born anew, for in receiving him were are born as children of God.

And our memory, is their memory, and the memories of us all are caught up in one simple fact: that God has remembered
us:
He has remembered his steadfast love and faithfulness.
Sing to the Lord a new song, for he has done marvellous things.

Here is the fundamental truth: that God has remembered his people. That is the memory to form our actions, spur of courage, and enable us to love as he loves.  Here is the assurance that God does not, will not, forget us.
That in every circumstance, God is with us. Remembering us for good, bearing our sorrows and fuelling our joys. Fond  memories and harsh memories, all held in the memory of God.

I’m fortunate enough to have met Santa Claus or his ready helpers many times in my life.  My first encounter outside my immediate family was with old Bob.  He was porter on the railway.  When the Beeching cuts fell on our railway, Bob had no more country stations to be a porter on.  For safety reasons lamps had to be kept on the disused platforms until they could be taken up.  So that was the job they gave to Bob.  Cycling the length, fuelling oil lamps and trimming wicks on stations now dead and silent. He was well known in all the villages he cycled to, and known especially amongst the children.  He was a real Santa Claus – always giving gifts.  Known and trusted by all who knew him, and loved him.
Yet quite alone.  And every Christmas too.  If you could have peeked into his living room on any Christmas you would have seen him by himself, sat quietly in the chair in front of the fire. And in the fireglow you might have caught sight of a faded photo on the mantel shelf – a young woman in a WAAF uniform. And then perhaps you’d guess why old Bob was alone, thinking on things of years ago, of plans laid but never fulfilled, of the London Blitz, and of the children that might have been if things had been different.

Fond memories, harsh memories, common memories, all held in the memory of God – the light that shines in the darkness, and the darkness will never overcome it.