Different and Yet the Same
Presentation of Christ in the Temple
(1 Corinthians 13); Luke 2.22-40 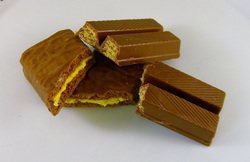 Is there anyone here who doesn’t know what I’m referring to?  If you don’t, then there is no way you can be awarded the CDM!
Or how about:

If your're old enough, it’s very hard in the UK not to know what these advertising ditties and slogans mean.

'Have a happy sandwich.'

'The chocolate chips everybody wants. Chips Ahoy.
They go fast!'

And if you haven’t the faintest idea what I’ve talking
about, here’s a big clue:

Most of us in Britain just don’t know what these things mean. Jell-O, Di’Giorno, Chips Ahoy, don’t register with us.

I use these ad slogans only as a way of showing how hard it is for meanings cross the Atlantic – despite all the TV shows, films and language we share.  How much harder it is then to cross the boundaries of time, language and completely different societies and life experiences.

For example, it's all too easy to assume that we can easily understand Saint Paul in that famous passage from 1 Corinthians 13.  After all love is a constant topic in what we see, and hear and read: endless songs, plots in the soaps, rom coms at the cinema, and all the rest.  We all know to what the word ‘love’ refers.  Or, we think we do—this state that we seem to fall in and out of with sometime joyous, and sometimes dire consequences.

But hang on, ours is a take on love that is highly psychologised.  We are all children of Freud here.  Thinking of our
lives in an introspective way comes easy to us.  We’re familiar with the ideas of interior motives, subconscious influences, and a highly individualistic understanding of the uniqueness of each one of us.  We fail to appreciate just how recent such understandings are, and we read them back into ancient things and ways where they didn’t exist.  And this isn’t just that New Testament Greek has four words for ‘love’ when English only has one.  There’s more to it than that.

When Saint Paul writes of love – of agapē – our individualistic, psychological, and introspective categories don’t figure at
all.  Instead he is talking about what the virtue that holds the Jesus-people together is like.  That belonging that welds together this community and makes it the church, Christ’s body now.  This is the allegiance that bonds together the group, individually and corporately. Paul lived in a collectivist world where the group of which you were a part was crucial to your very existence. Indeed individualistic existence as we know it didn’t figure at all –hence all the concerns about honour, status, and right and proper behaviour as people related to this or that social grouping, we see in scripture as well as in other documents of the ancient world.

So if we want to get nearer to Paul’s understanding we have to translate agapē by something like ‘group allegiance’ or ‘communal love’.  It’s a shock to discover that, but read the passage again replacing ‘love’ with ‘group allegiance’ and
you’ll see what I mean. And this isn’t a lessening or a lightening of the idea of love – the qualities of determination and will that we usually consider part of Christian love remain – but are now seen as all the more vital since they have to do with the very existence and continuance of the Jesus-people.  No agapē, no group allegiance, no Jesus-people.  But where this agapē holds sway it has an immense power about it – indeed it is imperishable.  Group allegiance, communal love, never ends.

Faith, hope, agapē, are the hallmarks of the Jesus-people.  These things last.  And of these abiding and eternal values, the greatest is group allegiance, agapē.  What a shock, Saint Paul really does overturn our ordinary thinking.  The love required of us to be followers of Christ challenges our individualistic preoccupation.

A similar awareness also applies to the story of Jesus’ presentation in the Temple.  We feel easier with this story because it so much more obvious needs translation.  We recognize that the terms are unfamiliar in a way that we don’t when it comes to an idea like ‘love.’  I know I need to know that in Hebrew custom a male child was presented to the Lord forty days after birth.  Usually a lamb and a pigeon were brought by the child’s parent. Joseph and Mary bring two pigeons because they can’t afford the full offering – theirs is an impoverished peasant’s offering.  The purpose of the offering was to buy the first-born male child back from God, the child being a gift from God on loan to the parents.  As God had saved the Hebrew first-born sons from Pharaoh in Egypt through the blood of a lamb, so every first-born son was purchased from God through the offering of a lamb.  These things we know we need to know to understand what going in the story, but there are other things that are hidden by their apparent familiarity.

Take just one – the ages of Simeon and Anna.  That Simeon is aged is implied, whereas we are told that Anna is 84. What are we to make of these elderly two?  Well, we mustn’t let our understanding of age obscure the fact that these two were very special just by being as old as they were.  In the days of Jesus, 90% of people were dead by their mid-forties, and it seems that no more than 3% of people reached their 60th birthday.   Most ordinary people died in their thirties.  No wonder these two were venerated and respected – the power of the Holy Spirit in Simeon recognized and Anna acknowledged as a prophet.

What are we being told in this?

Are we meant to compare them to the great faith figures of the Hebrew past who lived long lives?  Are we  being told that Jesus is acknowledged from the first by those who hold thecommunal memory in their very selves?  Does it mean that the tradition in which they were steeped has to be recognized and somehow celebrated by anyone who would follow Jesus now?  All those things and more, I suspect.  We have to get inside, as near as we may, the devotion and expectation of Simeon and Anna.  And we only have a chance of doing that if we recognize their difference from us.

I write this on Holocaust Memorial Day and my mind inevitably goes to Anne Frank and her amazing diary written when she and her family were hiding from the Nazis in occupied Amsterdam.On 6th July 1944, on the second anniversary of
her going into hiding and two months before she was her and her family were arrested and sent to concentration camps, Anne Frank wrote in her diary:
‘We’re all alive, but we don’t know why or what for; we’re all searching for happiness; we’re leading lives which are different and yet the same.’

‘Different and yet the same.’  The Anne Frank + You exhibition doesn’t leave her story  as yet another Holocaust horror, a thing of tragic history.  Instead it uses her story, her life – different and yet the same – as a way into issues that face youngsters now who are of an age similar to that of Anne when she was writing her diary.  A way into understanding difference and otherness, as well as similarity and commonness, made all the more poignant by the realities of her suffering and the vitality of her vision.  I mustn’t too easily assume I understand.

'Only the crumbliest, flakiest chocolate,
Tastes like chocolate never tasted before.'

If that can be  sung of mere chocolate, what delights await those who knowingly share the bread of heaven?