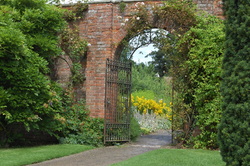 What is healing? Is it what comes out of a Health Centre  – intervention through drugs, exercises or surgery? Is it the work of so called ‘faith healers’ whose exploits sometimes appear in the press? Or is it something
else?

We know that sometimes in order to make someone better it
is a whole family that must be healed of the hurtful way they have been
living.

We know that sometimes very distinctly physical ailments are cured as a consequence of mental or spiritual change.

We know also that cures that are relatively straightforward occasionally just do not work. On the other hand, sometimes
those labelled hopeless cases surprisingly find new life and health.

And sometimes dying comes to be not a dreadful loss (though that’s real enough) but also a strange and fruitful healing.

We are aware – perhaps as never before – of the complexity of the very idea of healing. There is a revolution taking place – it goes quietly and often unremarked – but it is happening. We have been tempted down the road of looking at the healing of our bodies and personalities in a wholly mechanistic and technological way, and make no mistake about it, immense
benefits have been ours through that approach – but we are coming to realize that no matter how much money is spent on high-tech equipment, new drugs, new building, new techniques, and all the paraphernalia of space age medicine, and
that investment and effort will not of itself make us healthy. We are social, spiritual and physical beings, and our healing involves all those aspects of our being. There is a complexity to being well that we usually take for granted, but
when we’ve cause to pause and think about it, that complexity is staggering. We are conscious too that we are creatures of the earth, that healing must have to do with the totality of creation. We cannot separate the idea of healthy selves
entirely from the reality or otherwise of a healthy environment. ‘The whole creation waits to be set free,’in the words of Saint Paul.

We Christians believe that wholeness and healing are the very essence of Jesus’ work amongst his people. According to the Gospels, Jesus during his ministry spent a large proportion of his time healing, and the church too often concentrates on the teacher Jesus to the detriment of the healer Jesus. Again and again the gospel stories show Jesus to be interested in the  total health of a person.

Think of the encounter with the Syro-Phoenician in today’s’ reading in those kind of terms. What strangely harsh words Jesus uses; the full and awful force of racism and elitism is made very plain. This is the only story of the healing of a non-Jewish person in Mark’s gospel. Only through faith in Christ who heals can barriers between Jew and non-Jew be broken down and the non-Jew made part of God’s people. The healing must be of nation and race as well as individual and the story suggests that this is healing learning for Jesus as well as the woman’s daughter.

Healing was not something added on to Jesus’ task; rather it fits with his personality, his actions, and his teaching and learning. Jesus saw himself in a spiritual war on a cosmic level, taking on the forces of evil, hurt and harm in all their manifestations. he was only able to sustain the enormous consequences and repercussions of that struggle because of his deep  conviction about God’s sovereignty – hence all that talk about the Kingdom. Healing was a physical outworking of that kingdom in the here and now.

The route of the journey in chapters seven and eight of Mark is a most peculiar one that seems to go back on itself. Could it be that this strange perambulation is meant to tell us something in particular about healing and kingdom? Certainly every place named is on what orthodox Jews would have regarded as frontier lands of which the faithful should be especially wary. These are places far away from the places of respectable holiness. Yet these are places also where God might be doing something extraordinary – the prophet Isaiah (35.7) writes of such barren and useless places in terms of their godly possibilities:

‘For waters shall break forth in the wilderness,
and streams in the desert;
the burning sand shall become a pool,
and the thirsty ground springs of water;
the haunt of jackals shall become a swamp,
the grass shall become reeds and rushes.’(NRSV)

And what makes that particularly pertinent to the healings described is the verse that immediately before it in Isaiah:

‘Then the eyes of the blind shall be opened,
and the ears of the deaf unstopped;
then the lame shall leap like a deer,
and the tongue of the speechless sing for joy.’

In other words healing, hope and the overturning of disabilities happens in the despised and useless frontier places. Could it be that Mark is telling us that the Day of the Lord of which Isaiah spoke is actually happening in the person and actions of Jesus? The Isaiah vision is being fulfilled in Jesus: healings abound, disability is overcome, people are restored, barriers are broken down – and it’s all happen in the barren places the holy people discount as dry wastelands – literally and metaphorically. The haunt of jackals and people they describe as jackals because of their hatred and distain for them.

A few people it’s clear get that message and they recognize what’s going. Their response? They bring a man who is deaf and has a severe speech impediment to Jesus so that he may receive the healing of that newage promised by Isaiah. Don’t be in any doubt about what’s going on here. Mark’s style in storytelling is often severely brief, but here he is fulsome and
detailed. He shows Jesus deal with the man in ways that make absolute sense to a deaf person although they might seem strange to an insensitive observer.

Jesus isolates the man – he is to be absolutely sure that Jesus is addressing him. He has been the unnoticed onlooker to thousands of other people’s conversations, but this one is meant for him especially. He won’t have to guess at what’s meant for touch and gesture will speak to him directly. The group had only asked for the laying on of hands, but what actually takes place is an intensely specific and personal communication between Jesus and the man. The deaf stammerer will not be an object of sympathy; he will be involved directly in the movement towards his own healing. His deafness hasn’t made him insensitive and less than response –as so many people have dismissed as in the past – no, Jesus makes the very opposite assumption. And then comes the word, the one word in the encounter: ‘Ephphatha.’A word in the language that Jesus actually spoke; an Aramaic word that can be seen on the lips – a word to be lip-read. The man’s closedness is to be banished for ever – he is opened to a world of sound and more, he is opened to the new age that is in the person of
Jesus.

Listen little church, little band of disciples and would-be followers, listen to what the Lord did in this barren place and take your cues for living as a community of faith from it: if you’ve really seen what’s going on, go and bring people as the group did the deaf stammerer; talk to people in their own terms, one to one, as Jesus did; find ways to open people
up, and to open up God’s people, and you’ll find yourselves‘astounded beyond measure’ (Mark 7.37).

This is the business we are in –leading people towards wholeness, opening people up to life – restoring and building up what is ruined; offering a healing touch of hope amidst despair; nurturing lively faith and compassionate service. And the message of healing and hope is for each one of us, and through each one of us. God be praised!