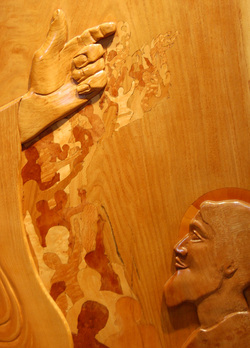 ‘The sun is rising behind Downton Abbey, a great  and splendid house in a great and splendid park. So secure does it appear, that  it seems as if the way of life it represents will last for another thousand years. It won't.

And so the juggernaut of this TV series rolls on – seen by many millions, rights to broadcast the show have been acquired in over 100 countries: The United States, Canada, Norway, Poland, the Netherlands, and
Russia, to mention a few perhaps obvious ones, but also Iran, Puerto Rico,
China, South Africa, the Philippines and many others.

And I ask myself why so many people in so many circumstances find the lives of the Earl of Grantham so entertaining? Part of the answer surely must be that the story of the aristocratic Crawleys is told with close attention to the servants who make their high-living physically possible. Mr Carson, the Butler; Mrs Hughes, the Housekeeper; Mrs Patmore, the
Cook; and all those who work under their direction, keep the serene and ordered lives of the Crawleys moving along whatever tragedy befalls them.

The Crawleys consider themselves to be due respect and deference simply because of who they. An Earl’s family has a certain place in the social world and that place is unquestioned and unquestionable. They rule – in the case of their servants and retainers – quite literally. Their permission must be sought for even the most minor of personal decisions that a  servant might be about to make. The Crawleys simply assume this authority over others. In the show this is largely a benign and apparently generous and fair authority – although Lady Mary can certainly be waspish! Yet the limits of that
concern is always clear – ultimately the servant is at the beck and call of the aristocratic in almost all things. The Crawleys appear blithely unaware of any other way of ordering social life.

And that’s the position of the Sadducees in our gospel story. They were a recognisably wealthy party within Jewish society. They were renowned for their social conservatism, for their aloofness from those they considered beneath them, and for their distain of other ways of life. As you might imagine, that outlook didn’t win them many friends and they could not be
described as in any sense a popular movement. Proud, superior, supercilious, haughty – that was the Sadducees.

We should hear that easy assumption of superiority in the question the Sadducees bring to Jesus. Think Crawley
imperiousness not conversational bonhomie. The question is meant to embarrass Jesus; its’ very tone and intention is mocking. They were pushing an accepted general rule that was meant to safeguard property and family welfare to the
extreme so as to make a fool of Jesus.

The levirate marriage law was intended to sustain family property and to provide for a widow and her children. It simply meant that a widow was obliged to marry her deceased husband’s brother and he was obliged to accept her in marriage. In this way male protection of a woman was assured and wealth and property kept within the family. It was a way of
preserving the integrity of a house, a family, or a clan.

The Sadducees taunted Jesus with the idea that a woman was widowed not once but seven times and on each occasion the levirate marriage custom applied. So, they asked, if resurrection is real as you say, who will she be married to in the resurrection life? Surely there will there be  absolute chaos in the afterlife – seven with a claim on her and her obliged to
seven. Get out of that one!

They think they’ve put him on the spot. No wriggle room there, or so they thought. What they failed to notice was the
assumption in their very question – theirs was a Crawley outlook on life, they just couldn’t see any alternative way of ordering social life. To the Sadducees (and indeed the Crawleys) the economic, religious and hierarchical ordering of
life they benefited from is the only way it can be ordered. They can see no alternatives. What is agreeable to them is the only way things can be.

The Sadducees think that a patriarchal hegemony  is the way things must be. The world can only be one way – the way that
advantages them. Think again, you Sadducees. In your pride and self-concern you make the age to come in your own image. You can’t see beyond the end of your own noses. The very things you consider immutable aren’t the way God orders things, and they aren’t permanent either. The age to come isn’t just a re-writing of what you think advantageous – in that time they will neither marry nor be given in marriage according to your take on the world. No, the children of the
resurrection experience things quite differently– the rules of your economics, your religion, your status, simply no longer apply. The things you think absolutely necessary to life – aren’t absolutely necessary at all. In the resurrection age your thinking is done away with. The children of the resurrection are the very children of God. Like angels they are not imprisoned in your outlook on the world.

To you Sadducees, wealth and property defines a person. Some are in and the majority are out. Everything and all relationships are circumscribed by a person’s relationship to wealth. But it is not so in the resurrection age – people are defined by their liveliness in God and what that does to their relationships.

To you Sadducees, order and hierarchy are what makes for strong bonds of belonging. As it happens that’s to your great
advantage – and you can look down from your lofty pinnacles of pride on the poor people you despise. But it is not so in the resurrection age – in God’s ordering there is a levelness and an openness that makes all God’s people God’s children.

To you Sadducees, it’s all about the present. When you have everything, or think you have, what need for hope? No wonder you don’t believe in the resurrection. The present is your only concern because hedonism rules your every whim and desire. Who cares about the rest? Let them go to the wall! But it is not so in the resurrection age – God’s way provides a new horizon that overcomes selfishness and spite, and brings hope for the future for all.

And the crunch comes in Jesus’ final rejoinder in the story we heard. The way the Sadducees had put it – these men who consider themselves to be the guardians of the patriarchy – denigrates the Patriarchs themselves for it suggests a deadly ordering of relationships. It’s as if he says, ‘Your petty-mindedness has reduced faith to the dead-letter of power,
status and social advantage. You’ve locked God into the way things were; into a dead system of cruel advantage for a few and distress for the many. That’s not the living faith of Israel.’

God is the God of the living where liveliness and love marks and shapes the relationships of God’s people. It’s what makes us alive – really alive to God that counts. And what makes us alive can’t be structures and powers that curtail and confine life in people. The Sadducees have got it wrong – they leave unquestioned what is to their advantage, and simply assume that’s how things must be. Like the Crawleys indeed. But God is the God of new possibilities, where the liveliness of the new age breaks through and breaks down the barriers we assume to be immutable. God revive our vision that we may see the resurrection age dawning now. God envision in us new possibilities.

The challenge from the Sadducees is recorded in Matthew, Mark and Luke, but only in Luke’s version does it conclude, ‘They durst not any more ask him any question’ (20.v40). Jesus has the last word. But let it be for us the first word of new possibilities, here and now.