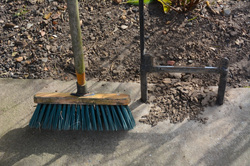 Searching around for inspiration I came across this, I’ve no idea whose words they are, but they set me thinking:

Lord, thank you for this sink of dirty dishes; we have plenty of food to eat.
Thank you for this pile of dirty washing; we have plenty of nice clothes to wear.
And I would like to thank you, Lord, for those unmade beds. They were so warm and so comfortable last night. I know that many have no bed.
My thanks to you, Lord, for this bathroom, complete with all the splattered mirrors, soggy towels and dirty lavatory. They are so convenient.
Lord, the presence of all these jobs awaiting me says you have richly blessed us. I shall do them all cheerfully and I shall do them gratefully. **

What an attitude!  Positive thinking if there ever was!  It reminds me of my grandmother Maud, she always had her jobs to do, her pinny wrapped around her, and she completed them, day after day after day - I never heard her complain of tiredness, boredom, the too frequent indifference to her labours of those around her.  She never had a TV, but would watch This is Your Life and the Wednesday episode of the soap Coronation Street on our television - she could never get to see the Monday episode but it didn't seem to make any difference to her enjoyment! What a difference our attitude towards life makes on our enjoyment of life.

Such a beautiful positive attitude is one that you would expect of a disciple of Jesus but such an attitude is not what we meet in the two disciples going from Jerusalem towards Emmaus.  Their faces were downcast.  Their hopes had been dashed. They thought Jesus was the Messiah but he had been crucified and was dead, and with his death their hopes died also.  When they came near to Emmaus they stopped, not wishing to continue their journey any longer because it was evening. After recognizing Jesus in the breaking of the bread do you notice the big change that came over them?  They set out that instant and returned to Jerusalem.  They had been leaving Jerusalem trying to escape from the reality of dashed hopes.  Instead of staying away from Jerusalem, now they wanted to go back again to where their hopes were dashed.  Previously when it was evening they did not have the enthusiasm to continue their journey any longer, and stopped when it was dusk.  Now even though it was dark they set out to travel by night back to Jerusalem.  What a difference it makes to have met Jesus!

Meeting Jesus brings new strength for living.  The two found that strength in Scriptures shared and the breaking of bread, just as we do now - scriptures shared, bread broken.

The disciples met Jesus on the road in the Scriptures and the breaking of the bread but also they met Jesus himself. That was a gentle meeting.  He walked by their side.  He listened to their story. He met them where they were.  He met them at their own level.  We too meet Jesus in people who treat us like that, who listen to our stories even if they don’t make sense to them.  We meet Jesus in people who have the time to talk to us and listen to our troubles without being patronizing.  We meet Jesus in the people who accept us graciously with all our faults and failings.

Recognition comes easily if we are open to the possibilities.

Do you know the one about the little boy who decided he wanted to find God. He knew it would probably be a long trip, so he decided to pack a lunch -- four packs of Walker's potato crisps and two packs of Ribena juice.

He set out on his journey and walked a few streets until he came to a park.  On one of the park benches sat an old woman looking at the pigeons.

The little boy sat down beside her and watched the pigeons too. When he grew hungry, he pulled out some crisps.  As he ate, he noticed the woman watching him, so he offered her one.  She accepted it gratefully and smiled at him.  He thought she had the most beautiful smile in the world.  Wanting to see it again, he opened a Ribena and offered her the other.  Once again she smiled that beautiful smile.

For a long time the two sat on that park bench eating crisps, drinking Ribena, smiling at each other, and watching the pigeons. Neither said a word.  Finally the little boy realized that it was getting late and he needed to go home.  He started to leave, took a few steps, turned back and gave the woman a big hug.  Her smile was brighter than ever before.

When he arrived home, his mother noticed that he was happy, but strangely quiet. 'What did you do today?' she asked. 'Oh, I had lunch in the park with God,' he said.  Before his mother could reply he added, 'You know, she has the most beautiful smile in the world.'

Meanwhile, the woman left the park and returned home.  Back in her flat, her son noticed something different about her.  He was often worried about her for she often seemed vague and not quite with it.  'What did you do today, Mum?' he asked.  'Oh, I ate crisps and drank Ribena in the park with God.'  And before her son could say anything at all, she added, 'You know, God’s a lot younger than I had imagined.' **

Recognition of the love of God in the incredible gift of the Risen Christ prompts us to respond.  The two who met Jesus on the Emmaus Road quickly returned to Jerusalem to tell the others what had happened.  We, too, are called to go.  Go with a new attitude to living. Go, daily striving to see the Risen Christ in all. Praise God for Easter joy and for the joy of recognition!

We meet Jesus in the people who help us to see our lives in all their richness. The people who stop us on the road to the doldrums of Emmaus and return to the joy of our everyday tasks in Jerusalem. Perhaps another story might help:

There was a famous monastery which had fallen on hard times. Formerly its many buildings were filled with young monks and its big church resounded with the singing, but now it was nearly deserted.  People no longer came there to be nourished by prayer.  A handful of old monks shuffled through the cloisters and praised their God with heavy hearts.

On the edge of the monastery woods, an old rabbi had built a little hut.  He would come there from time to time to fast and pray.  No one ever spoke with him, but whenever he appeared, the word would be passed from monk to monk: 'The rabbi walks in the woods.'  And for as  long as he was there, the monks would feel sustained by his prayerful presence.

One day the abbot decided to visit the rabbi and to open his heart to him.  So after the morning Eucharist, he set out through the woods.  As he approached the hut, the abbot saw the rabbi standing in the doorway, his arms outstretched in welcome.  The rabbi motioned the abbot to enter.  In the middle of the room was a wooden table with the Scriptures open on it. They sat there for a moment in the presence of the book, until finally the rabbi said: 'You and your brothers are serving God with heavy hearts.  You have come to ask a teaching of me.  I will give you this teaching, but you can only repeat it once.  After that, no one must say it aloud again.'  The rabbi looked straight at the abbot and said, 'The messiah is among you.'  For a while, all was silent. Then the rabbi said, 'Now you must go.'  The abbot left without a word and without ever looking back.

The next morning, the abbot called his monks together in the chapter room.  He told them he had received a teaching from 'the rabbi who walks in the woods' and that this teaching was  never again to be spoken aloud.  Then he looked at each of his brothers and said, 'The rabbi said that one of us is the messiah!'

The monks were startled by this.  'What could it mean?' they asked themselves.  'Is Brother John the messiah? Or Father Matthew? or Brother Thomas?  Am I the messiah?  What could this mean?'  They were all deeply puzzled by the rabbi's teaching. But no one ever mentioned it again.

As time went by, the monks began to treat one another with a very special reverence. There was a gentle, whole-heartedness, human quality about them now which was hard to describe but easy to notice.  They lived with one another as people who had finally found something.  But they prayed the Scriptures together as those who were always looking for something.  Occasional visitors found themselves deeply moved by the life of these monks.  Before long, people were coming from far and wide to be nourished by the prayer life of the monks, while young men were asking, once again, to become part of the community. **

So what does the road to Emmaus story say to us?  Our lives are full of expectations, the same expectations - mistaken as they may be - which the two disciples had.  'They had hoped' that Jesus would be the one to redeem Israel. They were dismayed to realize that this was not to be.  We too have many expectations for our own lives.  As our lives progress, many of the expectations which we originally had remain unfulfilled.  Our lives move on in directions which we would never have guessed. We can respond to this or that unexpected direction in either of two ways: the way those two disciples did, with disillusionment because our expectations have not been met, or with eagerness to find Christ anew in the changes we face.  Turn from the Emmaus of disappointment to the Jerusalem of joy.

Teach me, my God and King,
In all things thee to see;
And what I do in anything
To do it as for thee.


This is the famous stone
That turneth all to gold;
For that which God doth touch and own
Cannot for less be told.
George Herbert, 1593-1633


** the record of the sources of these stories has been lost. Identification that would allow proper attribution would be appreciated via the response form.