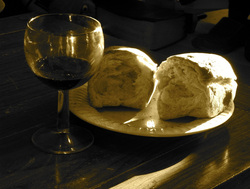 She was so outraged, indeed scandalized, that she wanted me to refuse to present her nephew for confirmation by the Bishop. He was about eleven years old and I was the person taking the preparation classes.  What had so outraged her?  Well, the lad had let slip that his sole reason for wanting to be confirmed as to be able to taste the wine!  His aunt, his godmother, was outraged.

We celebrate Corpus Christi - thanksgiving for the sacrament of the Eucharist; the feast of bread and wine; the Holy Communion; sometimes called the Holy Mysteries, and mysterious it certainly is.  How can a wafer thin fragment and a sip be a feast?  How can bread and wine be body and blood?  How can an itinerant first-century preacher be present in a twenty-first century action?  Mystery indeed.  None of us can fathom it; yet in another sense it is as plain as plain can be.  Like the play acting that comes so naturally to a five year old, we play act; we play act what God does, what God is doing, in this world.

Did you know the consumption of ordinary, standard bread can be predicted by the state of the national economy?  The more people there are out of work and the more business that close, the more white bread is eaten.  As unemployment declines and shopping and consumer credit increases so the consumption of white bread declines.  Bread is common stuff; stuff to see you through hard times.  So too wine.  Yes, it can be flash, expensive and fashionable, but at heart it's simply made and for much of humanity's existence safer to drink than easily contaminated water.

It's not hard to see what these two things signify: a fertile world and the bounty of nature; production and the skill of grower, baker, wine maker; the things of enterprise, good and bad, - grain that could have been bread for many fed to cattle to fatten them for the rich, luxuriated wine when so many can't even get clean water; staples that keep us going - bread to meet our hunger, wine to gladden our lives.

Common stuff of living and God through Jesus takes them and transforms them into the new things of his kingdom.  Like any good craftsman, he takes ordinary things and shapes them into something wonderful.  He is not jealous with his skill.  He shares it.  He takes, he blesses, he breaks, he gives.  And he is generous enough to call us his body that through us his action might be known in the world.  Bread and wine are taken of the tables of our daily lives and put into Jesus' hands to be transformed into what he meant all things to be - a direct means of contact between humankind and God.

This bread and wine are samples of us; our lives and personalities summed up in them, that through Christ's action our lives may be given back to us, no longer simply our own but his Body - part of the redeemed and redeeming community, bound in life and death to our Lord.  So the material that is really being worked on in this craftsman's shop is really our selves.

The Eucharist is the workshop of a new world.  Here and now our Living Lord comes to his own as he promised and eats bread and drinks new wine with us in the Kingdom of Heaven.  Here we have a foretaste of the heavenly banquet prepared for all humanity.  Here in the old order we taste the power of the new order.  Here we experience the transforming power of Christ to turn common things into holy things.

His aunt was scandalized that his only reason for being confirmed was to taste the wine.  But is it so scandalous?  Don't we all yearn to simply taste the wine of God's kingdom?