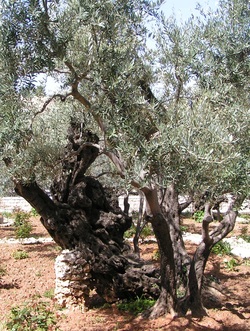 
Lo, I am with you ... (a selection of these verses)
when you leave self behind,
in the struggle for peace.,
when you suffer for love...
in the way of the cross...
in the darkness of death...
to the end of the world...

Smith, seated in the cinema, couldn't help but be aware that the man sitting in front of him had his arm around the neck of a rather large dog which sat in the seat next to him. The dog was clearly watching the film with understanding. He snarled at the villain, yelped happily at the funny remarks, and so on. Smith was impressed and at the end of the movie, leaning forward, he tapped the man on the shoulder, and said, "Pardon me sir, but I can't get over your dog's
behaviour." The man turned around and replied, "Frankly it surprises me too. He hated the book,"

There was this man dressed as Napoleon who went to see a psychiatrist at the urging of his wife. "What's your problem, " asked the doctor.  "Oh, I've no problem," replied the man. "I'm one of the most famous people in the world. I have a great army behind me, I have all the money I'll ever need, and I live in great luxury."
"Then why are you here?"
"It's because of my wife," said the man. "She thinks she's Mrs Jones."

A little boy returning home from his first church service asked his mother what the preacher had meant by the phrase "Dust to dust, ashes to ashes."  "It means," answered his mother, "that we all come from dust and we shall all return to
dust."  That night, his mother was startled to hear her little boy scream from his bedroom, "Come quick, Mummy - there's someone under the bed either coming or going!"


Has he flipped? you're thinking. In the pulpit making corny jokes?  I'm told that in parts of the Eastern Church, clergy by tradition do not preach on this day - they only tell jokes - because Easter tells us that God has the last laugh.  I don't know whether it's true or not; but I rather hope it is. The very last enemy, death, is defeated.  The devil and all his works are cast down.  Sin, harm and hurt have had their sting drawn - Jesus lives.   Don't  just hear Mary's delight - no let it live in your heart and soul and mind - I have seen the Lord!  (verse 18).

That sharp distinction between worldly and religious is not, I think, in our Jewish heritage. We remove faith from the earthiness of humour, and games and fun, and we shouldn't. Today is a party - as Mary had it, they tried to take my Lord, away (verse 13) - but he was having none of it.  Jesus lives!  This is a resurrection party. Ours is a God of laughter, who in generosity pours out the abundance of life on his people.  Like Mary we get it wrong all the time, looking in the wrong places, looking to the wrong people, becoming overwhelmed  in despair, or worry or trouble.

Let's face it there is much to despair over - but despair does not have the last laugh.  Thank you for letting me share this Holy Week with you - we've rehearsed the hard things of death, betrayal, cowardice and indifference - why discipleship is no easy thing, but Christ doesn't leave us there, ever.  That's why I rejoice to celebrate this resurrection party with
you.

(**) When the great Rabbi Israel Shem Tove saw misfortune threatening his people, it was his custom to go into a certain part of the forest to meditate.  There he would light a fire, say a special prayer, and the miracle would be accomplished and the misfortune averted.

Years later when his disciple, the celebrated Magid of Mezritch, had occasion, for the same  reason, to intercede with heaven, he would go to the same place in the forest and say: “Master of the Universe, listen! I do not know how to light the fire, but I am still able to say the prayer,” and again the miracle would be accomplished.

Years later still, Rabbi Moshe-leib of Sasov, in order to save his people once more, would go into the forest and say, “I do not know how to light the fire. I do not know the prayer, but I know the place and this must be sufficient.”  It was sufficient and the miracle was accomplished.

Then it fell to Rabbi Israel of Rizhyn to overcome misfortune. Sitting in his armchair, his head in his hands, he spoke to God: “I am unable to light the fire, and I do not know the prayer, and I cannot even find the place in the forest.  All I can do is to tell the story, and this must be sufficient.”  And it was sufficient, for God made people because he loves
stories.

The Gospel writers Mark, Matthew and Luke all make the point that the tomb is the wrong place to look for the risen Christ.  "He is not here."  "Tell his diciples he has risen, he is going before you to Galilee."  "Why are you looking among the dead for someone who is alive?"

As ever John's Gospel, is a bit more subtle and allusive in directing us to the place where we can meet the resurrected Christ NOW.  Let me show you the signs, he says, of what it's like when the living Christ is about.

It's like a wedding on the 3rd day … unexpected supplies of the best vintage.  It's like a dying child who recovers …unexpectedly, yesterday afternoon, the fever left him.  It's like a man paralyzed for years who suddenly leans to walk again … a new life for him for sure.  It's like a hungry crowd of 5000 in the desert finding food … a sign of eternal food
always available.  It's like a man born blind being given sight - has anyone heard the like of it before … seeing,
really seeing, that's what happens when the risen Jesus is about. It's like Lazarus raised from the tomb. In case we miss the point, the Lord's command in the story is "Unbind him, let him go." Resurrection brings freedom and release. And finally, according to John, it's like the passion and resurrection story of Jesus himself - a gardener who is Lord of the universe, a breakfast on the seashore, and a tremendous catch of fish after a night's worthless effort, and forgiveness and commissioning for friend Peter who had betrayed him.

Look for the resurrection here and now.  We are to be witnesses, as was Mary.  I'll tell you the story of Jesus who I have met.

And so it fell to Rabbi Israelof Rizhyn to overcome misfortune. Sitting in his armchair, his head in his hands, he spoke to God: “I am unable to light the fire, and I do not know the prayer, and I cannot even find the place in the forest.  All I can do is to tell the story, and this must be sufficient.”

And it was sufficient, for God made people because he loves stories, and wants his beloved people to live the resurrection NOW, to be part of his story.

**this powerful story is a famous Chassidic tale.