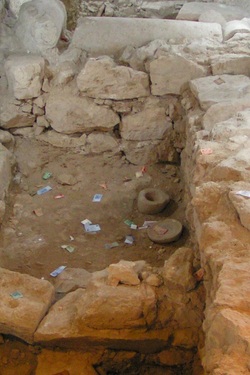 Jesus is teaching in the Temple –symbolically the very  centre of all that faith is and all that faith can achieve. And he makes a sharp  contrast that cuts to the core – the widow who gives all that she has and the
leaders of faith, who having all faith’s treasures at their disposal, exploit
and denigrate others. The contrast is between the poor struggling widow, who  goes largely unseen; and the showy religious official, who is all too obviously seen.

We have to be really careful about this contrast. It isn’t about religious leaders per se (or widows, come to that); and it certainly isn’t a criticism of Jewish religion (after all Jesus remains a faithful Jew his whole life). No, the contrast is between religion/faith that enhances living and
that which degrades it. Jesus is speaking about the ever constant threat to faithfulness. This is about faith that’s healthy contrasted with faith that corrupts. And there in the precincts of the holy place where everyone you would have thought should know the distinction, Jesus finds a large and eager audience. ‘A large crowd was listening to him,’or as another translation has it, ‘many people came to him and listened to him gladly.’ His words were striking home, and soon the consequence of those words will be a violent backlash that leads to the cross. These words count for something.

Now let me take you to my local supermarket. A mother and twenty-something daughter are shopping together. They have a large heavy trolley with lots in it. As she pulls things out of the fridge, Mum is in animated conversation on her mobile phone. Daughter is having difficulty steering the trolley; she also is in conversation on her mobile, but still manages to comment on the items being launched into the trolley. Then comes the finishing touch, (I speak as one also trying to shop in the same narrow chilled goods aisle), whoever is on the other end of the daughter’s phone says something that requires
a response from the mother. Two people, four simultaneous conversations. I did not listen to the snippets of those conversations gladly!

You have heard that it was said. Ours a world absolutely saturated with things being said. Cell phones, smart phones, blogs, tweets, multi-channel media, downloads, digital radio, Skype, Facebook,- on and on. You can find some thoughts on all this on my personal website! We act as if everything can be said, and everything should be said.

The faith practice of Jesus and his contemporaries was rather more circumspect. They were clear that there were certain things that could not be said. Most famously, of course, the Tetragrammaton, the most sacred name of the God of Israel. The Ten Words, the Ten Commandments, were also not things not to be said explicitly. Both Philo and Josephus record that these things could not be repeated verbatim. They could be written out and placed in tephilin (prayer boxes) or put on mezuzoth (doorposts), but they could not be spoken because they were the very words of God given to his people without the agency of any interpreter.

That doesn’t mean, of course, that Jesus and his fellow Jews didn’t quote or refer to the Ten Words – far from it, as we know. But what they did was to disguise the form so that they weren’t saying them verbatim. That meant subtlety changing the words or phrasing of a commandment or reordering the list.  We see Jesus doing this in his answer to the rich man’s question about eternal life in Mark 10, ‘You know the commandments: Do not kill, do not steal, do not bear false
witness, do not cheat, honour your father and mother.’  And we see him also doing something similar in the antitheses to five of the Commandments given in the latter part of Matthew 5, ‘You have heard that it was said ... ... but I tell you.’

We suffer from word inflation. We pay lip serve service to how important words are (everything is about communication!), but if we’re honest with ourselves we know we now need a barrow-load to achieve what just a few would have achieved in earlier days, we suffer inflation just like the Zimbabwean dollar. Quite simply, words weighed more for Jesus and his
contemporaries.

So when Jesus talks about what has been said and what he says, we have to try to hear those things in a way that acknowledges that different weighting. And when we are told ‘a large crowd listened gladly,’ that means so much more than the casual, half-hearted listening to which we have become accustomed.

For example, it’s not good enough to simply project our own highly psychologised understanding of human actions onto Jesus’ assertion that calling someone a fool makes the person offering the insult liable to the hell of fire. The anger and insult to which Jesus refers isn’t subsumed in our individualistic way of looking at things. We may be justified in allowing Jesus’ words to help us reform the interior motivations and inclinations of our psyches – but not at the expense of ignoring the social weighting of Jesus’ words.

But of course, the word is to us as much as to them. Know what can be said, and what cannot; what should be said and
what should not. Ordering our actions and our words to God and of God, to our neighbour and of our neighbour, without dis’ing.

So hear the contrast Jesus makes aright. The widow gives all that she had – in doing so she makes plain that all belongs to God and she is willing to entrust herself to God. This is self-offering. It stands in marked contrast to the calculating exploitation of faith. Any of us may fool ourselves into believing such calculation is genuine faith: but it isn’t. As Jesus says
elsewhere, ‘Where your treasure is, there your heart will be also.’ Serious words, but words to hear gladly.