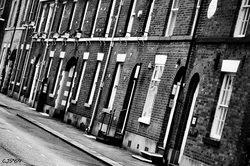 ‘Our house, was our castle and our keep
Our house, in the middle of one’s street
Our house …’

So sang Madness from the roof of Buckingham Palace in the Diamond Jubilee Concert of 2012.  It was a  funny twist on their 1983 hit.  ‘Our house,’ as I recall the music video that showed a crowded terrace with the band squashed into a tiny front room – a home far removed from the size and splendour of Buckingham Palace.  Yet somehow the Palace was being signified as ‘our house,’ the home of Her Majesty the Queen and thereby a symbol of our belonging as a nation.  To the many thousands who stood in front of it dancing and waving it was exactly the right place to be.  It was a celebration of the monarchy, of course, but also a celebration of nationhood.  It didn’t need the fly past of a Lancaster bomber, Spitfires, and Hurricane to remind older people that this particular home also stands for survival though dark days of war.

Somehow this place is ‘our house’ – whether you’re old enough to remember previous balcony waves or not – this is the place to gather to mark our belonging as a people. Perhaps romanticised; perhaps idealised; perhaps un-thought through – it is, nevertheless, a profound symbolism that many feel, whether it can be articulated or not.  Many thousands felt it the right and proper thing to do – to stand outside this house, our house.

And many millions who watched it on TV felt that same rightness it seems.  ‘If a house is divided against itself, that house will not be able to stand,’ said Jesus, and the truth of that saying hits home at a Jubilee celebration.  And pictures of a few hundred Republicans demonstrating alongside the river pageant; and controversy about low paid or unpaid stewards left to shiver under a bridge for hours, only serve to underline the power of the symbols involved. Who is inside and who is outside?

A similar dynamic is at work in the incident recorded in today’s reading from Mark’s gospel.  Jesus with the disciples
and the crowd are inside the house, whilst Jesus’ mother and relatives are outside.  Things appear the wrong way about – in a world where kinship bonds are all important, Jesus is in the house and his family are outside.  They had gone out to restrain him, but far from achieving that, they end up outside shouting in.  Even his enemies and critics are inside!  What’s going on?

House here is a symbol that stands for a variety of things.  Yes, this is ‘our house’ in that Jesus seems at home, but he goes on to redefine what being ‘at home’ means in terms of the relationship within a family. His family want to restrain him, for his own protection no doubt, but that isn’t their sole concern. They also want to protect the reputation and standing of the family.  In a world in which clan and kinship are the determining factors in social standing, identity and control, Jesus’ actions are casting a troubling shadow over the whole family.  They want to curb his words and his actions to protect themselves.  He’s in dispute with powerful forces in society – and that is bringing trouble for them.

And his response is to redefine relationships entirely.  It isn’t clan and family – loyalties and position determined by birth – that counts, but relationship determined by actions.  It’s not about to whom you were born that counts, says Jesus. It’s what you do that counts. ‘Whoever does the will of God is my brother and sister and mother,’ says Jesus.  This house is defined by what you choose to do, not by what you cannot do anything about.  No one can choose the family into which they are born – but we can all choose what we do with this life we are given.  This isn’t about weakening family relationships, but rather the strengthening of them through a loving and deepened choice.

The famous TV naturalist, Sir David Attenborough, describes himself as being ‘a Grammar School boy’ during the war.  He has told of the trouble he and his mates got into because of the pranks they played, and how he was always in the middle stream – never a high flyer but neither in the lowest class either.  As a pupil he volunteered both to work in a factory for the war effort and to teach as a pupil teacher in another school. So he considered himself quite worldly-wise despite the ordinariness of his family background.  When he eventually got to Cambridge University he discovered that his undergraduate neighbour living in the room below him had his own monogrammed silver cutlery and had come to university straight from an elite public school.  His neighbour was from an aristocratic family. Attenborough says that at the time he thought himself at a distinct advantage over his neighbour, even to the extent of feeling rather sorry for him.  Life experience was to his mind was much more significant than the cocoon of privilege.

Choosing what you do with life is the key, not what you are born into.  Choose your house.  Don’t be content with definitions imposed on you. Jesus’ family are outside this house.  They can choose not to be, but at this  moment they don’t – they remain outside.  The consequence of their unwillingness to accept the Jesus alternative is  that they unwittingly align themselves with his severest critics.  And that brings me to the other way of understanding ‘house’ in this passage.

House here also refers to the Temple in Jerusalem – a ‘house of prayer’ as Jesus calls it in chapter 11 of Mark.  The scribes from the city have come to launch a fresh attack on him.  They support the contention that he is out of his mind by insisting that his actions are the product of a thoroughly unhealthy demonic influence.  He is a man possessed, they say.  This is how they attempt to undermine both his personal authority and the power of his actions.  They interpret his actions and words as a direct challenge to their authority and the authority of the house in which they all belong – the Temple.  The freedom Jesus both declares and heals people into is for them a denial of all things proper.  If they heard his new definition of loyalty and godly relationships, that would only serve to reinforce their fierce criticism of him. This Jesus has put himself beyond the pale – outside the house of faith, in their terms.

And Jesus’ response is to turn their own words against them in a sophisticated and crushing riddle. Ched Myers, a great scholarly interpreter of Mark’s Gospel, sums it up:
How can Satan cast out Satan?
A divided kingdom cannot stand;
A divided house cannot stand;
Satan divided in revolt against himself
cannot stand but is coming to an end.
(Say to This Mountain, Orbis Books, 1999)

Only when ‘the strong man’ of deceit, corruption, and the abuse of power is tied up can the house of faith be ‘plundered’ of its treasures and truly become ‘a house of prayer for all the nations’(11.17). By their words and actions against him the scribes have demonised acts of freedom and healing.  They have labelled as demonic saving actions of compassion, healing and reconciliation. They have refused to hear words of hope, decrying what is liberating as the works of the devil.  How crazy is that?  That is blasphemy against the movement of the Holy Spirit.

This house will collapse.  The things of faith and grace cannot be abused.  Step  inside, friend, says Jesus.  Into a
house not made with hands, into a family not circumscribed by the vagaries of birth, into a home built by God that it eternal.  Don’t let smallness of vision and power’s corruption evict you from your proper home.  ‘Thus says the Lord,’ through his prophet Isaiah (49.25), ‘Even the captives of the mighty shall be taken, and the prey of the tyrant be rescued; for I will contend with those who contend with you, and I will save your children.’

This is a jubilee remission of obligations and debts that allows us to chose.  Come enter the Father’s house.
Feel the rightness of the invitation and of your response so that ‘grace, as it extends to more and more, may increase thanksgiving, to the glory of God’ (2 Cor 4.15).  Live in the house of grace – our house.  Thanks be to God.