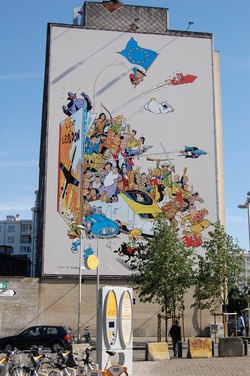 It was all planned. I was to meet a guest arriving by train, drive her to her host for the night, and still have 30 minutes to get to an all important meeting. Then came the announcement, 'The 1714 departure is reported running 30 minutes late. We apologies for the late arrival of this train due to the breakdown of an earlier service.'

Thirty minutes on a Crewe station platform. A world of people on journeys: the bored looking Executive in a cashmere coat; the serviceman in uniform; the aged  lady with an over large suitcase; the courting couple sitting on their bags kissing; some noisy kids, rucksacks in a pile. There are parables here of God and his people.

Burdens
Some are literally loaded down. How will that old lady manage the suitcase that seems almost bigger than her? The flight weight allowance always too constraining. That's us: loaded down. Not just possessions, but the things inside us that burden us. What the psychologists call 'our baggage' – hurts from long ago, cynicism, unresolved guilt, jockeying for position, self-concern, and lack of trust. All these things and more weigh us down.

The disciples were weighed down. There had been dissension when the sons of Zebedee made a play for the places of authority at Christ's left and right. Soon there would be Jesus' dismaying words about the destruction of the Temple. Talk of his death would prompt them all to promises of death-defying loyalty. All too soon the promises will be found
empty. Did they understand the donkey?  The beasts of common labour; rather than the war horse of power? Or were
they weighed down with expectations of what a king's authority should look like? The palms gave Jesus and the animals the red carpet treatment. No hoof or foot laid on bear cobbles. But didn't the disciples see that as a royal beginning,
rather than the end of power plays? Jesus had sent them out (10:9) without money, begging bowl, shirt, shoes or stick. Could there be a clearer instruction to leave the baggage behind. But it is so hard.

Self-absorbed
It is so hard because 'I' becomes so big on a journey. The 1714 did indeed arrive 30 late, and then chaos broke out. The earlier breakdown meant there were already too many people on the train. My guest could hardly get off for the anxious press of people getting on. There can be so much aggro and conflict in the journey.

Luke tells us the disciples argued about status. The sons of Zebedee incident was but a part of wider rivalry. 'I' becomes all important on a journey, even on the road with God it seems. The new king journeys in  humility and gentleness on a beast of burden. Those who would follow him must read the sign aright and do as he does, but even after years on the road with  him, the disciples got it wrong.

Encounter
Unexpected encounters can be the joy of journeys but preoccupation with getting where I want to go dulls the imagination. The averted eyes, the impatient sighs, the rush to the platform gate; are signs that say it all. But God refuses to leave us in our self-absorption. The crowd intent on their Passover pilgrimages suddenly found a shared voice in a wholly unexpected shout. 'Hosanna to the Son of David!' The city went wild with excitement. Even the sophisticated urbanites found that something good can come from the backwaters of rural Nazareth.

The road of faith overturns our self-concern, lets us leave our burdens aside, and calls us into unlikely, but joyful, company. Ours  is a God of the brief encounter on the only journey that ultimately matters – the journey to him. And, lest the clouds of Friday obscure the way, we know also of two sad friends journeying to Emmaus who met their Risen Lord, and although they knew him not, it was like a fire burning within them.

In the kingdom of heaven is my end and my beginning
And the road that I must follow night and day.
Travel on, travel on to the kingdom that is coming,
The kingdom will be with you all the way.
Sydney Carter.