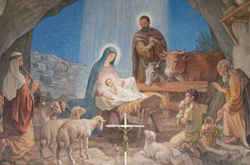 Bromodosis, Onychomycosis, Hyperkeratosis, and Onychocrytosis – all  scary sounding terms. In case you’re not familiar with the language: that is stinky feet, fungal nails, corns, and ingrown toenails. Yuck! ‘How beautiful upon the mountains are the feet of the messenger who announces peace,’ says Isaiah, but not many of us are blessed with beautiful feet! But that’s where the good news starts – with the sweaty, tired, bruised feet of a messenger who has run perhaps many miles to bring to an anxious people the word ‘Peace.’

The  poetry is so lovely; the words so familiar; and so we easily miss the bodily references – the feet that run, the voice that announces, the ears that listens, the eyes that see. This is flesh and blood that carries and receives the message.

The return of the Lord is felt and heard and voiced and seen. No rarefied, abstract, conceptual account of the divine, but a tangible, bodily reassurance. There is something remarkable and different here. Later in Isaiah (64.4) we read, ‘From
ages past no one has heard, no ear has perceived, no eye has seen ...,’ yet now the ineffable, mysterious, all glorious God is present in ways that the human body feels and knows and senses. God it is that has done this, as St Paul puts it (1 Cor 2.10), God makes God tangible. On that action we rely.

Those few verses from Hebrews takes up the theme: God has spoken to us by a Son. And that’s just what is meant – a son, a baby born; an infant squawking its life; a burping, gurgling, messing bundle of humanity demanding food and warmth and
comfort. No angel this, and the author is being very careful in the words used, this is not an all-spiritual being, an entity of another realm of existence; no, this is a person, a human being. Indeed all things are sustained by ‘his powerful word’ but that does not mean that he is not human as we are human – we have been ‘spoken to’ – and that comes in the things of conversation, chat, discussion, and gossip that we know as keeping company with each other. In these last days God keeps company with us. The Word is not abstract Reason – with a capital R – but rather God’s bodily self-revelation and self-communication.

A student came to a rabbi and said, ‘In the olden days there were people who saw the face of God. Why don’t they anymore?’ The rabbi replied, ‘Because nowadays no one can stoop that low.’ God keeps company with us.

‘And the Word became flesh and lived among us.’ (Jn 1.14) Again we hear and yet don’t hear what’s said in these familiar words. Sure enough we are meant to hear in John’s famous words a reworking of the very beginning of the Bible:
‘In the beginning God created the heavens and the earth. Now the earth
was a formless void, there was darkness over the deep, and God’s spirit hovered
over the water. God said, ‘Let there be light’, and there was light. ...’
(Genesis 1.1-3 JB).
So John has, ‘In the beginning was the Word ...’ and later we heard, ‘The light shines in the darkness, and the darkness did not overcome it.’

Whatever else this passage is about it is clearly about a new creation in the coming of Jesus; a new way of understanding and experiencing the link between the eternal and the temporary, what is heavenly and what is earthly.

In Genesis God is described as delighting in creation and humanity as part of it, ‘God saw everything that he had made, and indeed, it was very good’ (1.31). And when Wisdom is described as part of God’s character a similar thought is
repeated. Wisdom is described as ‘rejoicing in his inhabited world and delighting in the human race.’ (Proverbs 8.31) John recognises that divine pleasure – ‘the life was the light of all people’ – but he takes it further and it's captured in that little word ‘flesh’ (Jn 1.14).

It wouldn’t be an exaggeration to say that ‘Word,’ with a capital W, and ‘flesh,’ undoubtedly with a small F, were the polar opposites in the way John’s hearers thought. Word related to God’s eternal purposes; it was an aspect of that divine
wisdom that goes way beyond human experience. It has about it qualities of the infinite, the immutable and the perpetual that are entirely different from the decaying and limited thing we call ordinary life. Flesh, on the other hand, referred to the all too obvious limitations of living – corruption, earth-boundedness, and degenerating. And so the contrast is made plain in Isaiah 40.6f, ‘All flesh is grass, and its beauty like the wild flowers ... The grass withers, the flower fades, but the Word of our God remains for ever.’ (JB).

And the same usage is there in our Christmas Gospel when John speaks of ‘the will of the flesh’ meaning humanity’s perverse and mixed motives born of bodily limitations and urges. And yet it is this same term that John links with the Word: ‘the Word became flesh and lived among us.’ WORD and flesh; DIVINE and human; ETERNAL and earthy; HOLY and humdrum; the SUBLIME with stinky feet! As that great humanitarian and priest Jean Vanier puts it, this is ‘the heart, the centre, the beginning and the end of the Gospel.’

Years before (1928) his anti-Nazi activities led the theologian Dietrich Bonhoeffer to imprisonment and then death, he said this in a sermon:

‘Jesus Christ, God himself, speaks to us from every human being; the other person, this enigmatic, impenetrable You, is God’s claim on us; indeed, it is the holy God in person whom we encounter. God’s claim is made on us in the wanderer on the  street, the beggar at the door, the sick person at the door of the church, though certainly no less in every person near to us, in every person with whom we are together daily.’

And later the same year, he said:

‘Christ walks the earth as long as there are people, as your neighbour, as the person through whom Christ summons you, addresses you, makes claims on you.  ... Christ is at the door; he lives in the form of those around us. Will you close the door or open it for him?’

‘The Word became flesh’ – the sublime with stinky feet.