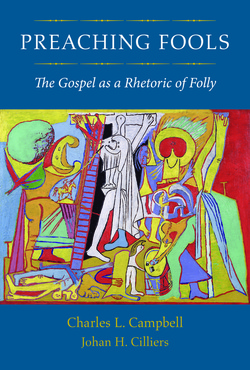 Preachers who have sometimes worried whether they are up to the task – and I assume that anxiety applies to just about all of us – will gain much encouragement from this book. It is the outworking of a remarkable collaboration between two teachers of preaching, one an American and one a South African. The reader is privileged to eavesdrop on a  conversation made all the richer by its international flavour.

Saint Paul’s words about the folly of preaching and the foolishness of the preacher are a refrain that wind their way through the whole text. And as befits that Pauline emphasis the disturbing and unsettling folly of the cross is at the very heart of what the book is about. Don’t make any assumptions about a jokey and lightweight take on preaching. This is a deeply challenging work that aims to disturb and disquiet its readers –
just as foolishness sometimes does –and lead them to insights that demand not be ignored because they are so profoundly ‘of the gospel.’ As the authors conclude, ‘Like the gospel itself, the rhetoric of folly interrupts and unsettles normative discourse in order to unmask the old age and open a space where the new creation might be perceived’ (page 216).

After an opening consideration of artefacts which help locate the argument, Campbell and Cilliers examine at length what preaching the cross actually does. Using concepts and metaphors from the social sciences and from their different national histories, and  linking them with theological and literary insights, they weave a rhetoric that embraces Martin Luther, King Lear, Flannery O’Connor, Erasmus, Harper Lee and Umberto Eco, to name but a few of those to whom they refer. Their consideration  of scripture is often immensely helpful and I particularly liked their discussion of the parables and of the Sermon on the Mount. Indeed some of their thoughts have already featured in my own preaching. The occasional black and white illustrations are helpful, particularly when cartoons are used to substantiate their case.

The authors identify four characteristics of preaching fools, namely, they are agents of interruption; they playfully engage liminality, that space between being and becoming; they perceive things differently and challenge their hearers by reframing conventional perspectives; and they discern where the Spirit is moving behind the masks of common reality. These are the marks of those giving voice to the threshold of the new creation, in which ‘Christians are always on the Way.’ A humbling but stirring thought that prompted this preacher to think anew about the significance of ‘giving voice.’

This is a book that I would put alongside the sociologist Peter Berger’s ‘Redeeming Laughter: The Comic Dimension of Human Experience’ and the Old Testament scholar Walter Brueggemann’s ‘Theology of the Old Testament: Testimony, Dispute, Advocacy.’ They are both classics of a different kind of testimony. This book is worthy of their company.