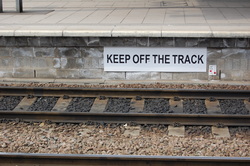 The storyteller said, ‘There was a man going down town on
a suburban line. Standing on a secluded platform, a man in a filthy coat
approached him and hit him hard with something he had hidden under the coat. Then he stripped him of his coat, his wallet and his phone and went off on the next train leaving him half dead with the dirty coat thrown on top of him.

It happened that a Street Pastor was next on the platform. He saw the man slumped under the dirty coat his attacker had left behind. Thinking him a wino, the worse for drink, he jumped on the next train, eager to get to where his efforts could make a real difference with young  clubbers.

Likewise a bishop came for the next train, and seeing the  wino slumped against the railings, didn’t give him a second
thought.

But a wino coming to the station in the hope of shelter for a couple of hours sleep, seeing the coat just flung over the still figure, ... ... eyed it as something worth having. He pulled it, as dirty and smelly as it was, off the injured man and staggered away with it.

The bleeding, unconscious traveller was left to the cold.

In the early hours of the morning, the police arrested the wino for breaking a window and drunkenness. He told them, in halting and slurred words, of the man injured at the station. But who believes a wino?

Who then was neighbour to the man hit and robbed by the thieves?’ ‘No one,’ comes the reply. ‘So we all go and do
likewise.’

It’s a picture drawn a million times by kids at church. It’s been mimed, enacted, sung of, so many times it hardly bears repeating. It’s not the horror story of a traveller coshed on a railway station, to whom no one gives aid. It’s not a person robbed not once but twice. It not a tale of indifference in which no one gives a cuss. It’s not the story I’ve told.

And yet, the story that Jesus told was to his hearers every bit as shaming and disturbing as a blooded figure slumped against a railway fence. Jesus’ hearers knew full well that God required of them  neighbourliness – that was part of the holiness of godly living. They knew it – just as we know that compassion and care are what’s asked of each of us. Who
here would admit to being an uncompassionate person?

You see there’s deliberate shock and reversal in the Jesus story. The hearers’ reaction was something like, ‘How dare you tell this story against us? We know our obligations to each other and we keep them.’

But it’s not true – the obligations they keep are hedged about with qualifications and hesitations and discriminations. They are neighbourly to those who are acceptable to them – the rest can go hang. Did you notice the lawyer can’t even utter the name ‘Samaritan’? In answer to Jesus’ question about which of the three passers-by was neighbour to the man who was
robbed and injured, his reply is ‘The one who showed him mercy.’ He can’t even bring himself to utter the word ‘Samaritan’!

Who deserves help? Who do we like? Who is worthy of our effort on their part? We’ll help those who help themselves. Charity begins at home.

The lawyer comes to Jesus asking for a principle; ‘What must I do to inherit eternal life?’ And the principle is plain enough – love God and love neighbour. But the lawyer wants to justify himself, ‘The principle can’t be that unqualified – get real – tell me, for instance, how I can recognize just who is my neighbour.’ Jesus has shifted the focus from principle
to action: ‘Do this, and you will live.’ But the lawyer doesn’t like the simplicity and directness of the answer. ‘There has to be more it than that,’ he reasons. Jesus talks action, but the lawyer talks philosophy. It’s all in the head with him. He reckons he can reduce this encounter to an argument; after all lawyers are good at arguments. But Jesus will have none of it. He rather keeps the issue at the level of human actions and intentions –the story he tells is barbed, disconcerting, and profoundly challenging.

In the Jesus story the hated Samaritan acts humanely and we are told just how costly, how risky that action is. In the rail traveller’s tale no one is prepared to bear such a risk. Think of it – the Samaritan stops  in an area known for robbers – no one will stop on the railway platform. The Samaritan puts the wounded man on his animal and walked alongside, if they come after him, he’s given up on his means of escape –the railway traveller’s plight doesn’t even prompt a second thought. The Samaritan tends the sufferer’s wounds, risking contamination, the fear of disease and cross-infection isn’t anything to cause him a moment’s hesitation –the filthy coat and the drying blood of the railway traveller puts off closer examination. Body fluids are always a risk, only the second thief will risk it through a drunken haze. The Samaritan crosses
a social boundary, abandoning ethnic inheritance and all the hurts and squabbles he’s received form Jews. The hatred that comes so naturally is abandoned in an instant – ‘he was moved with pity,’ we are told. No one has pity on the railway
traveller – his appearance puts them all off. Even the delayed concern that begins to rise in the consciousness of the drunk achieves nothing. There’s a cost in doing; a risk in doing. And no one will risk it; no one has time; no one has care. It’s a contemporary tale that is, I suggest, believable. It restores the shocking and disconcerting aspect of the Jesus’ story. Psychological experiments have demonstrated time and time again that we find it all too easy to avoid the demands of common humanity. I remember one where individuals on the way to an examination were ready to actually step over the body of a ‘wounded person’ in order to be on time.

Jesus, the master storyteller, ladles on the details to make it hit home. It costs the Samaritan much – so much – he exposes himself to robbery, ridicule, risk and so much more, for the good of a stranger who is a hated one of ‘them.’ And I hear in the story another word of costliness, another word of Jesus:

This is the love that costs even life itself. Here’s the motivation – the Son of God who will risk all to rescue and save. A question always worth asking of the stories that Jesus told is: who is the Christ figure here? Who in the story shows what God is like; who does the godly thing; and who embodies divine virtues? And surely in this story the first comparison to be
made is with the Samaritan himself – God is like a hated Samaritan who risks all to help an unworthy stranger. In Luke’s writing the showing of mercy is something that God or his agent, the man Jesus, does. Mercy is an attribute of
God himself. So when Jesus concludes the story with, ‘Go and do likewise,’ he is  saying go and do as God does. That’s the very opposite of the self-centred and self-concerned avoidance of ‘so we all go and do likewise’by walking away –
fearful of the threat and risk action would involve.

That’s the first Christ figure in Jesus’ story; but I think there’s another as well. Christ is also the one who receives no mercy at  human hands – he is the bruised and naked man at the roadside, the slumped and blooded figure at the railway fence. He is the one ignored; the one whose plight is of no concern. He is the one walked away from, whoever she or he is –  so we all go and do likewise – justifying ourselves and trying to live with our prevarications and hardheartedness. Jesus is in the ditch, at the railings, and we walk on by. We hear and see neither Samaritan nor sufferer. What will shake
us from our indifference? Such a hard story, but Christ risks his all for you.

Many years ago the great Christian preacher, Leslie Weatherhead, was in a particularly impoverished part of India and he wrote this:
Sometimes on some errand of love I go to the slums or some fould den of thieves or some haunt of evil. I pity. I sympathize. I try to help ... then I come home. I bathe. I eat. I sleep. BUT HE STAYS THERE ... How well I remember visiting a leper settlement in India, speaking to the lepers, spending the day with them, and then – having sympathized and done any small thing or said any small word to help – I went home to my bungalow, changed my clothes and sat down to dinner. But when Jesus saw a leper he became a leper ... he identified himself with all the horror of it until he could get his shoulder under the burden and dispel it for ever.

Jesus in the ditch and at the railings calls to you. He is the one your every urge presses you to walk away from – but don’t. Be a Samaritan as he is a Samaritan to you.