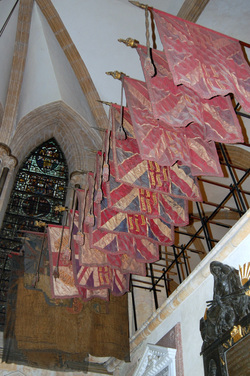 In my family it was for a long time, ‘Don't mention the war.’ Our Ruth was going out with a German lad and we just didn't know the boundaries of what could be mentioned or not. They married and now that we know
the family well, ‘Don't mention the war’ has become an oft repeated family saying. But for a time it was a matter of silence being the best option – things that must remain unspoken.

And I think of my childhood friend, Clive, whose father was one of those who fought in the North African desert in WWII. When I visited their house, Clive's dad was often to be found sitting in the armchair in the  corner of their darkened sitting room. He would stare vacantly and whistle quietly to himself. We knew never to disturb him when in this state. In fact, it was best to leave the room if at all possible. We could only imagine what he was reliving deep in the recesses of his mind. He never, ever spoke of the desert campaign and never ventured out on Remembrance Sunday. Today, no doubt, what he was going through would be called ‘post-traumatic stress,’ but then no  one mentioned such a thing. He died in his fifties, a broken man. No one mentioned what we all knew had shortened his life.

If things had been said, would his life have turned out differently? Who knows, but this I do know some things must be said. I'm a believer in the talking cure. Things can be changed; people can be healed; by a word said at the right time in the right way.

‘Let us go up to the mountain of the Lord, to the house of the God of Jacob,’ we heard the prophet suggest; and why? Because there, he says, they will hear the word of the Lord. Words will teach and instruct. In this holy place they will recover their sense of belonging together and that will turn the things of war into tools for life – swords into ploughshares and spears into pruning-hooks – and it’s speaking that will make this happen. ‘The mouth of the Lord of hosts’ will speak in his people – in his house, in his household – the place where things are shared, thoughts expressed, and words are held in common. This is where all the peoples find that the word spoken is a common word. The peoples will be unified by this word.

Listen to this, it’s from June 1941 and it’s a young office worker speaking, ‘It annoys me to have to listen to [him] making these speeches. I was dragged out of the office to listen, but everyone got bored and quite a lot stopped listening. I hadn’t expected it to be remotely interesting but I had hoped for some amusement from the good fellow’s obvious rhetorical devices and odd pronunciation.’ [Toye, p. 115]

Or again, from a sailor in the same era serving on board HMS Lightning, who wrote this to his fiancée: ‘I was on watch
last night for [his] speech but he gives me the pip anyway so I didn’t miss much. I don’t need him to give me moral support and if a vote was cast in the services for him he would not be there anyway, the navy has special dislike for him as we do all his dirty work for him.’ [Toye, p. 146]

They don’t suggest a people unified by a word, do they? The quotations come from a remarkable book, The Roar of the Lion: The Untold Story of Churchill’s World War II Speeches by Richard Toye (Oxford University Press, 2013). Toye makes the point that although we look back and think Churchill’s speeches to have been universally acclaimed and to have had a
profoundly positive effect, that wasn’t actually always the case. Indeed the place of criticism, disagreement, and disapproval were aspects of the very freedom the nation, and not least Churchill, was struggling for. The crucial part was that Churchill gave voice – whether that voicing received approbation or not. Hitler and Mussolini, by contrast, retreated into silence when things started to go wrong for them.

The power of words said. There’s a similar idea in the passage from John’s Gospel. We heard a snippet about the commandment to love but it comes from a much longer passage about Jesus as the true vine. The picture is of Jesus as the vine and his followers the branches. We belong together as closely as that, and it’s that belonging that produces life in  abundance that is profound, creative, and caring – or in the words of the gospel, life that bears fruit. What Jesus commands – says – changes things because his people know they belong to him and to one another. He gives voice to a love that transcends common human experience, but that voicing of itself turns human experience into that very transcendence. We feel that what is being voiced wakes in us something far beyond the commonplace.

Have you heard of the campaign for the Women of Steel memorial in Sheffield? During both World Wars thousands of young women were conscripted into the steel mills of Sheffield. In a physically challenging and often dangerous environment their efforts kept the factories producing the steel that was vital to the war effort. At the end of hostilities they were simply dismissed as the men returned from fighting, and their story has been largely untold. Now that the youngest of them are in their late 80s, a steel memorial statue has been designed and there’s a campaign to raise the funds to have it placed in the city centre. I hope it’s successful for isn’t there a rightness about a tangible object to tell of that group of women’s
contribution? As we want the efforts of all to be remembered; to be talked of; to be mentioned as part of a wider account that we can all own as somehow ‘ours?’

Churchill was succeeded in peacetime as Prime Minister by Clement Attlee who said, ‘If somebody asked me what exactly Winston did to win the war, I would say, ‘Talk about it.’ [Toye, p. 230]
Some things must be said.