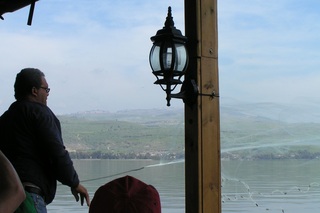 Fishing on Lake Galilee
“Can we go on a boat?”  My youngest daughter when two years of age went through  this period of being crazy about boats.  “Can we go on a boat?”  You see, her
child-minder had showed her a video of a family holiday on a cabin cruiser, and that coupled with a trip to a park with dinghies on the lake, really caught her imagination.  She longed to be all at sea.  But the thing about being two years’ old is that you are not at sea, or at least you shouldn’t be if all is  going well with you and your family. A small child is cocooned in a world of wonder and warmth - she follows you around, “How does that work?”  “Where does that switch on?”  “What’s that?  “Can my sit on your knee?”  “I want to play out!” A two year old is not at sea, a two year old has a confidence in the  joy of living that is a delight.  No, it’s grown-ups who end up all at sea.

He said to me, “The only training I’ve had is in the school of hard  knocks.”  I suppose that’s how most of us think of life - the thing that knocks us about, confuses us, depresses us, worries us, stresses us, - knocks that child-like confidence
out of us.  The big knocks change us forever.  It’s interesting how working with groups of people you’ve never met before how often people are very up-front about those - people say they’ve been widowed or divorced or made redundant.   Strangely it is often the smaller knocks that we don’t admit.  It’s acceptable to be all at sea because of a major personal
crisis, but it isn’t only major personal crises that put us all at sea.  With the discernment that comes with ageing comes the realisation of the many things  that threaten well-being.  The two year old is free of such things - but soon
she won’t be. And once you know what can go wrong in this business of living, there’s no unknowing it.  A trivial word, a minor failure, an easy mistake, a careless happening, and the certainties begin to tremble.  It is so dreadfully  easy to feel yourself all at sea.

That’s where those disciples were.  Simon Peter, Thomas the twin, Nathaniel, the sons of Zebedee, and the other two,
were literally at sea - but they were emotionally, spiritually, psychologically at sea as well.  The major crisis, no doubt, provoked in them many minor ones too.  It’s plain to see that in what happened to them.  Like any of us, when they
were all at sea, in a storm of doubt and fear and anxiety, they went back to the old familiar thing, the thing they knew by heart, the thing that  came as second nature - fishing. But even here they fail.  They are so at sea emotionally that they have lost their touch - 'that night they caught nothing.'

There’s a really hard lesson for us in this.  All at sea, they set about the work that came to them naturally, they
followed their impulses, and it was an abject failure.  They went with what came naturally to them and it proved utterly
futile. How often do we do the same thing? People tell me they are very hard-pressed at home or work, but when things
lighten up I’ll see them in church. The impulse is to regard worship as a leisure activity - and how wrong it is.

What suits, what makes sense to us, what is convenient, what we think is appropriate - these are the priorities that determine what we do, and we wonder why that quiet confidence in life escapes us.  Only when we respond to Christ’s
initiative will we get it right. Remember his words, 'Apart from me you can do nothing.'

That’s just what those fishers found.  They laboured away at what they thought appropriate, and it got them nowhere.

But once they responded to Christ’s word, the catch was beyond belief.  And just to ram the idea home, did you notice that they couldn’t haul the net into the  boat, so they had to drag it behind the dinghy.  But once Simon Peter is
instructed by Christ he is able to haul the net to land by himself.  At the command of Jesus he is able to achieve what could not be achieved before.

If we’re to have for ourselves that quality of life that is eternal our actions have got be what Christ wants, not what suits us.  Or another way to say it would be that our discipleship, our holiness, our aliveness is measured by how far we have put ourselves out for Christ’s sake. If our faith and its practice always suits our inclinations then we can be certain
that we haven’t heard the gospel. As someone wrote, 'It is harder to believe than not to believe.'  Eternity is open to us NOW, but we stumble along deaf and blind to the everlasting joy that is ours for the taking.

'The trivial round, the common task
Would furnish all we ought to ask;
Room to deny ourselves, a road
To bring us, daily, nearer God.'

Time and time again, we are at sea.  We labour on and we catch not a thing.  How desperate this is - maybe we’ve
laboured for years but we’re still only  doing what suits us.  You can be all at sea without knowing it, so that when the
storm comes up you’re totally lost.  Take heart, for this is also the gospel of the second chance.  nknown to us, there stands a stranger on the shores of our lives, calling out, waiting the time when we will respond to his command.

He is there, waiting for you to hear and act. This is a message of hope for  emty times.

Remember who was in the boats?  They were disciples.  You know, the ones who had run away when Jesus was arrested.
The ones who when he needed the comfort of human presence, fell asleep on him.  Yes, these are the  ones who when the going got tough, abandoned him. Peter so eager to lead the others, denied even knowing him.

You see, the stranger on the shore does not say to them, 'Do you understand properly, now? Do you regret the past?  Do
you know what you’ve actually done?  Will you reform, change your ways?'  All those questions would have made sense.  All those questions might be addressed to us - but Jesus asks NONE of them.  The only question he asks is very much a here and now one, 'Do you love me?'

That’s all the risen Lord is interested in.  Let what has happened be; forget it.  Put aside the stupidities and the mistakes.  Let the sins be forgotten, along with the hurts and the betrayals. Be at sea no longer. Instead let your anchor be in this one thing, 'Do you love me?'  Put all  the rest behind.  Claim for your own what the question implies- Christ’s absolute
forgiveness of us and his absolute love of us.  Here and now we are being asked the only question that ultimately matters in our lives. The only question that frees us to be. That gives us the way to live life with confidence, openness, trust, and joy.  Never mind yesterday, never mind what has happened so far.  Now, today, 'Do you love me?'  The stranger stands on the shore of our lives.

'He comes to us as One unknown,without a name, as of old, by the lakeside, He came to those men who knew Him
not.  He speaks to us the same word  …  and sets us to the tasks which He has to fulfil for our time.  He commands. And to those who obey Him, whether they be wise or simple, He will reveal Himself in the toils, the conflicts, the sufferings which they shall pass through in His fellowship, and as an ineffable mystery, they shall learn in their own experience Who He is.'

And in the learning the security of the loved child will be ours, forever.