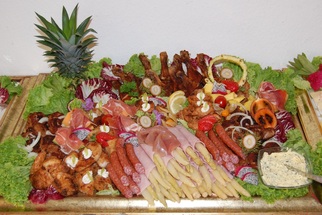 The bank advert gets it exactly right.  You know the one about the European man trying to impress at a Far Eastern business lunch, who eats every morsel of the cooked eel served to him without realizing that by doing so he is affronting his host’s hospitality.  His ignorance of the local convention of leaving a little as a sign of appreciation of the host’s generosity passes him by and prompts repeated larger and larger portions of eel.  The social courtesies about food are endless and infinitely varied.  Who hasn’t got into trouble with these things sometimes? I have to admit that I have on occasions poured a drink into a pot plant or surreptitiously pocketed an inedible object given as a delicacy.

The customs around food and its consumption are complex and often very culturally particular. Keep that in mind as we think about today’s gospel. There’s a lot going on in this brief story.

In the social world of the ancient Mediterranean, as now, meals were very powerful means of communication.  Meals gave
legitimacy to a person’s role and status, which meant that most meals were eaten by groups of people of the same social status.  In other words, the very fact a leading Pharisee invited Jesus to eat indicates that Jesus was accepted as a social
equal – not quite the picture of Jesus as a status-less migrant peasant labourer we are sometimes given.

He was invited as an equal, but there is something devious going on in this – they were watching him and the word used implies hostile close observation.  You know the kind of thing, 'Hey, look at her, doesn’t she know that’s a soup spoon
she’s eating her melon with?'  'Did you hear him, he asked for ketchup for his smoked salmon?' A meal where everyone is watching everyone else; who eats what, when and how, what’s done at the table, who’s sitting where, who has come with
whom.

And Jesus’ response to all this staring?  He tells a story.  A story about seeking the highest place; about prestige posturing and social ladder-climbing.  ‘Seek the lowest place,’ says Jesus.  Don’t look for honoured status, look for the meanest place.  He undermines all the prevailing conventions and proprieties. He advocates social suicide, for that’s the consequence of his teaching.

You see to accept an invitation to dinner obligated a guest to return the favour. Reciprocity was a key fact of economic life then [isn’t it still?] – you do me a favour; I do you a favour – this is the system that oils the wheels of wealth and status.  This is THE rule that guided every guest list; that made the social world function. Jesus, to his hosts an ignorant, crass, and rude rabbi is metaphorically spitting in the face of everyone else around the table.  As to table manners,
this Jesus is too much –it’s an insult.

If you really did invite the poor, the crippled, the maimed, the destitute, how would everyone else feel? They’d feel insulted, dishonoured, and outraged.  Who wants to eat with the smelly, the foulmouthed, and the filthy?  You’d certainly never accept another invitation to that house if you had any thought for your social standing.  That’s the end of reciprocity – the I’ll scratch your back, you scratch mine that keeps the world going round.  In the advice of Jesus lies ruin –  socially, financially. It’s just not how the world works.

According to Jesus, in the economy of grace honour has nothing to do with human judgements, with return invitations.
God it is who determines true honour, and at the resurrection of the righteous, God will personally reward the host who has been gracious to those unable to return an invitation.  Try to hear that statement as if you were a Pharisee, a believer in the resurrection.  Their understanding of what living in the light of the resurrection means is turned upside-down.  Jesus says as noble, as sensible, as righteous, as their behaviour is, it is exactly wrong, as wrong as it could be.  Jesus turns their
very faith against them.  You could have cut the atmosphere with a knife!  Talk about spoiling a dinner party.

Jesus will have nothing of the domestic niceties of social convention – now as then.  Again and again the Gospels give us a Jesus who flouts the sensible, the comfortable, the matter of facts ways of the world.  And we domesticate him, make him a cosy, comforting pussy cat because we can’t live with the beautiful but so scary tiger he really is. We look on this story of a dinner party, like watching a TV programme or considering an article in a newspaper.  We are one step removed.  We
consider what it might be about.  We look on it dispassionately – like those who stared at him that day.  Humbug!

We are the Pharisees now – Jesus addresses us with his affronting manner.  We who order our world by the rules of reciprocity. Think again, says Jesus, for that’s as far away from the kingdom of grace as you can get.  I quote: 'In the
church, then, the first seat, of the highest place, is to be sought not by ambition but by humility: not by money but by holiness.'  That was St Bruno preaching at the beginning of the twelfth century.  Eight hundred and more years later and we still haven’t got it.  We are the Pharisees now.  We can’t get beyond the 50/50 arrangement despite Jesus being so clear about it:

Do not neglect to show hospitality to strangers, says the author to the Hebrews.  And the stranger isn’t in a position to pay you back.  The nub of this is in what the Japanese theologian Kosuke Koyama calls 'Christ as the hospitality of God towards us.'  In terms of Christ we all come to the banquet as the poor, for none of us can pay God back.  God invites us nevertheless to the great feast, the Lord’s Supper, though not one of us can reciprocate.

Think of the command to love your enemy in the light of that.  The thing about knowing who is your enemy is that it gives you a very strong self-identity.  It indelibly marks the difference, draws the boundaries, the battle-lines; but Jesus says in the kingdom of grace your identity comes from loving your enemies. Enemies, the very ones from whom we would never want to receive reciprocity, pay back.  Whose outlooks, convictions, goals, values and purposes we probably consider anathema to our own!

Look who’s coming to dinner! The Jubilee banquet of the Messiah will shock us all.