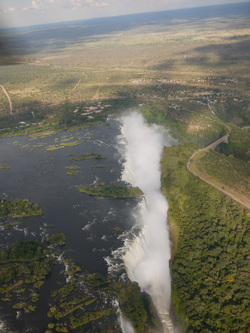 Imagine 47 million gallons of water passing in front of
your eyes every minute – or perhaps in the flood season three times as much as  that – that’s 130 million gallons every minute. Imagine it. I doubt if you can. The awesome spectacle I’m asking you to envisage is the Victoria Falls – the  Zambesi River suddenly plunging more than 350 feet over a precipice 1¼ miles wide. You first know you’re nearing them miles away when you see the great  clouds of spray soaring into the bright African sky. Nearer to them and the noise is deafening; hence the local traditional name ‘the smoke that thunders.’ Staring down into the falls from the edge of the rainforest the spectacle is incredible, amazing, and hard to take in – at one and the same time frightening
and beautiful. Frightening because of the immense force driving in front of you – something at work so much bigger than yourself and yet only a tiny fraction of the power and grandeur of our world, let alone our universe. I felt small, frighteningly insignificant in front of this tremendous torrent. What is  humankind? Nothing more than a stench in the nostrils of God!

Frightening, yes, but also beautiful. A white mountain of
water with its swirling mists; the dense, luscious growth of the forest that is perpetually wet and warm; and the myriads of rainbows in the water sodden atmosphere – in the trees, in the grass, over the waters themselves. Like the  glistening colours of some enormous natural jewel. And you’re there standing in
the middle of it all! The tears come, for there are no words to be spoken. You know yourself to be touched with the splendour of God made apparent in creation, and you – the onlooker, the spectator – are somehow caught up and made part of it. Beauty indeed!

It is the way of things in our natural world that its  wonders contain within them both these poles of emotion– fear and inspiring beauty. Nature is so immensely powerful in comparison to puny humanity, and yet humanity at its best is a part of this ordering, and somehow made more whole by the confrontation those two poles of emotion.
– is this what drives people, despite the risks, to the mountain tops
– is this what sends the potholer through cold and dark water far underground and through oppressively narrow rocky passages to glimpse gigantic caverns that so few others have seen?
– is this what draws the onlooker too close to the sea wall as the gale rages?

Let water this harvest-time stand as a symbol for the awe-inspiring power of nature which we have in so many ways harnessed and controlled, but which still remains essentially beyond our control.

No new thought this, in the tiny country chapels of my youth amongst the harvest display there was always a plain glass of water to remind the harvest songsters of just that. For the ancient Jews too water stood  for life – any desert peoples knows that. And for them it also stood for chaos,  the waters of flood and tempest. Right now in our world water doesn’t stand for  those things – it is those things for millions of people. And we do well to remember that in our own land people have felt the devastating power of flood to  wreck lives and livelihoods – some over and over again. Water is a simple but
very troublesome symbol – loaded with ambiguity, it speaks of both life and death.

People who have seen the rains fail again, whose land is bare and parched, turned to dust and blown away – never again to yield the harvest on which they depend.

Others engulfed in water as oceans of mud in the relentless stream of floods carry all before them –bringing destruction, ruin and heartache.

They cry out to us – we who generally enjoy mellow rains and gentle sun – where the skill of farmer, horticulturalist, and tree-dresser have once again turned the gifts of nature into a harvest in which we all share. Yet, even here we are more conscious than perhaps for a very long time that these things are precarious. One fruit farmer has told me this year’s harvest is the worst he can remember.

Not so far from where I was entranced by ‘the smoke that  thunders’ I was troubled by the pitiful sight of children with old oil cans  scraping the damp sand in a dried up river bed in the hope that enough murky water would accumulate in the hole they made in order for them to take some home. I saw people, also who were crippled for life by bilharzias and other
water-borne pests and diseases. Yet in the same nation there were well manicured lawns with little notices pinned to the high wire fences around them – ‘Borehole water’ they read. It wasn’t so long ago that bad water was a scourge in this
country – and thousands suffered. Charles Kingsley is remembered locally as one of the enthusiasts who work resulted in our Grosvenor Museum in the late nineteenth century, but more significantly during his brief time here in Chester
in the 1870s he was an active public campaigner about bad water.

Water is a symbol of life itself– that which we so often  take entirely for granted, treat lightly as if it’s ours by right, and fail to  honour it except when something goes wrong. Like water it is simply used up – run-off and wasted until the hot water eventually flows and reaches the tap. This is a thing carelessly used in gallons and gallons – hardly noticed. A small
gang of youngsters were fooling around with squeezy bottles full of water a few years back during one of our periodic droughts. All of a sudden a red-faced man appeared from one of the flats overlooking the lawn on which they were soaking
one another. ‘The valleys of my homeland have been flooded to bring you that,’ he screamed, ‘villages and farms drowned and you throw it about as if it was worthless.’ And he was right. Wasn’t it the Duke of Edinburgh who pointed out
the folly of peeing half a pint and flushing it away with three gallons of clean  water!

What are we ourselves but millions of little bubbles of water each bounded by its cell wall. It is what we are made of; without it no life. Just as water stands for the flood, chaos and the vagaries of nature – the very precariousness of our existence – so too it stands for the life we have.

Each one of us literally created in water, in that warm inner sea of our mother’s womb, and nurtured and cushioned in that protective liquid for nine months. It is no quirk that the tiny human foetus inside its mother’s womb in the early days is just like a tiny fish – mirroring in its development the evolutionary process itself when life began in the murky waters
of some primeval puddle and then through myriads of years, step by step, developing in the watery world until life became sustainable on dry land. I  quake to speak of it for I discern in this the mighty hand of God showing us the  vast complexity and change that has produced you and me. Each one of us as but a tiny blob tracing the path of life’s history until the day the waters broke and we were each born. God making plain the lavish and inestimably costly process  that created humanity – repeated for every human birth to make the point that every individual human is of the greatest value to God.

And so to baptism – the sacrament in which the individual believer is incorporated into Christ’s death and resurrection. Psychologists say the actual hours of birth are some of the most traumatic of our whole lives. When the waters of the womb break the old life of the child dies and it has to struggle to come to a new life in birth. So it is with baptism. The old life is  done away with; we are born into a new life. And water must flow in baptism to make that point
·     the chaos of drowning water
·     the invigorating life sustaining water
·     the beauty of water
·     the stuff of which life itself is made
·     the stuff of harvest – foods and souls

As Colin Morris writes somewhere, ‘Baptism is a proclamation to the church and through the church to the world that ALL people live, and move and have their being in God.’ This is not a privileged acquired by baptism – this is something the church does because it states what is. Many, of course, will repudiate the claim, but the fact cannot be denied – it is
written in the heavens and recorded in the personal history of which I’ve spoken – ALL people live, move and have their being in God.

It is  God who has provided the fresh, living waters – water for the body and for the earth, and water for the soul. It is his gift – for the drought stricken child in poverty and the affluent rich man with a spiritual drought in his soul.

The story goes that in one of those terrible but all too common bayonet encounters of World War I a young Englishman found himself face to face to with a German officer armed with a sword. There was a terrible impact. The bayonet went through the German’s chest and he was mortally wounded. The sword went through the Englishman’s thigh. They both fell, next to one another. The tide of battle rolled and receded as they lay weak and helpless.
‘How do you feel?’ said the German, obviously at home in English.
‘Pretty bad.’ came the reply.
‘Anything you want?’
‘Just water, I’m terribly thirsty.’
With great effort the German produced a water-bottle and held it out, ‘Drink this and live.’
Then with death creeping upon his face, he drew from his tunic an English New Testament, and with bloody thumb held on an open page said, ‘Drink this and live forever.’

God calls us to share those life giving waters – will you?