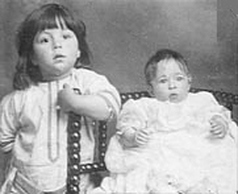 Please look at the photograph on the inside of the notices (reproduced here).  It's a family snap like millions of others.  Not dissimilar I'm sure to family snaps you've got at home.  Two young faces staring at the camera - a little uncertain, perhaps a little wary of what is being required of them.  'Stand next to your new little sister.  Stand still. Try to smile.  Look at the camera.  Look happy. Peek-a-boo.  Come on now, we want a good picture.'  But the cajoling wasn't altogether successful.  Sober-sides I think my Gran would have called it!

Still it's a shot worthy of any proud parent.  Pictures of our young are very special.  They are things to treasure - this photo certainly has been. He's just a toddler and she's a babe in arms - not yet a year old.  Clothed in all that white finery - the day of her baptism could it be?  He's dressed for an occasion, isn't he?  This is a moment in these little ones lives to savour. A day when neighbours, friends and family can join in the chorus: 'Aren't they a delight?' All that pride, all that promise, all that hope.  What will become of these little ones?  What does the future hold for them?  What will their bright eyes see of life?  What experiences will come their way?  What will they make of their lives?  Let the prescient question linger in your mind.

I'm remined of a very unusual cathedral funeral 6 or so years ago.  The lady had been a cathedral guide, a welcomer, so you could have anticipated a cathedral funeral.  Indeed years before her Dad had sung in the choir, so there was a long family connection with the place: another reason for a cathedral service.  Added to all that, she was a regular worshipper - so where else but the cathedral?  No, what made it unusual wasn't the cathedral setting, it was that her death wasn't announced until after the funeral had taken place.  Barbara Dainton didn't want acquaintances and people who only knew of her coming to her funeral.  The only people who knew it was going to take place were the few people who really knew
her well.

There are the two issues: wondering what will happen to this little baby and not knowing what is happening to an aged lady.  Knowing what's happening is something we count as really significant.  When the train or the plane fails to turn up, the shout always is, 'Why don't they tell us what is happening?'  We need to know.  Uncertainty about tomorrow isn't
something we can tolerate.  We expect every child to have a future.  We don't expect even knowing of a person's funeral being held from us. We put a premium on knowing.  We expect to be told.  We expect to be able to plan.  We expect
tomorrow.

And that's one of the things to notice about what Jesus says in our Gospel reading.  He tells them what is going to be.  He
tells them about tomorrow.  What he is doing is what the people of his day would have expected. These are Jesus' last words before he is arrested: his death is imminent.  To his hearers he already has one foot in the realm of death.  Being that close to God's realm means that you see things that people locked into everyday life can't see.  This was a commonplace idea in the ancient world: Socrates, Heracles, Hector, are all reported as having this gift of sight just before death; and in the Bible Jacob and Moses have it too.  About to die, Jesus has insight about tomorrow.

That's the opposite of the way we usually understand it.  To our minds those about to die don't see the future, but the past. We say that the whole of their life flashes before their eyes.  Do you remember that final scene in the epic 1997 film
'Titanic?'  Elderly Rose has been to the site of the wreck and relived the experience of being on the ship and her
passionate love affair with Jack Dawson.  We see the frail but feisty woman back in here home at the point of her
death - across her consciousness flashes the great hall of the ship and all those she knew are there - and her beloved Jack waiting on the grand staircase to embrace her. Not foresight, but a very personal memory of the past.

Added to that our last words and testaments usually deal with things. That's what a will is about - the personally determined disposition of goods and property.  Our post-mortem act the very last thing the individual decides. But Jesus' last will and testament isn't individualistic in that way, it's about people, about the great tear in social relationships his death will bring. Such a tear that the earth itself will be shaken, families and communities will be broken, and terror and the rumour of terror will hold sway.  It's as if things are completely out of control.

And that makes sense of the reading from 2 Thessalonians.  That little church was threatened on every side - unpopular with neighbours, persecuted by those in power, its members facing the hostility of even family and friends.  They expected Jesus to return shortly, and roll up the map of human experience, as it were.  These are the end days, so what's to be done?

Nothing!  Just survive, that's all that's needed.  Why work, why strive, why bother?  No, says St Paul, you've got it exactly wrong.  Idleness, indifference, despair are not worthy of Christians.  Don't be diverted from doing what is right, from mutual support, from fair labour.  Anything less is a betrayal of Christ and of Christ's confidence in his people. Christians are those who work for their Lord in bad times as well as good.

About to die, Jesus can see what will be, as his contemporaries would have expected.  To them such prescience, such foresight, was part of the dying person's care for his or her family and friends.  From the place of the dead the one about to die tells the group, the family, what is going to happen. Those who look to Jesus as Teacher are told what is coming their way - not so as to frighten or dismay them - but so as to prepare them so that they can stick together and stick up for one another.  Earlier in Luke's Gospel, Jesus was asked by a Pharisee when is the Kingdom of God coming?  Jesus replied, 'The Kingdom of God is not coming with things that can be observed; nor will they say, "Look, here it is"' or "There it is!" for, in fact, the Kingdom of Godis among you.'  In other words, the Kingdom of God is to found in human society, in our
relationships, in our loyalty, in our common endeavour.  The foresight Jesus has is for the good of the group, the well-being of the church.  That's why despite calamity, the underlying certainty is that they will gain their souls - ultimately the wisdom and words given them by God will withstand anything. Take heart, not a hair of your head will perish.

As individuals we need to know.  We expect to be told.  We need to be able to plan.  The expectation is that knowing gives us control and self-determination; that the choices about tomorrow will be ours.  NO, says Jesus.  You're fooling yourself.  Tomorrow is in God's hands not yours, and you'll need God's grace at work in each other to see it through.  The calamities Jesus sees we assume to indicate God's absence, whereas Jesus sees them as signs of God's presence.  How else would we
get through them?

What does the future hold for the little girl in the photograph?  In April 1912 that little girl, with her brother Bertram, her mum Georgette, and her dad Bertram Frank boarded as third-class passengers the ship Titanic at Southampton.  On the fateful night of 15th April Millvina, Bertram and Georgette escaped the sinking ship in lifeboat 13. Her Dad's body was
never recovered. She never married; she died in 2009 and was still living in Southampton.  Millvina was the last living survivor of the Titanic disaster of 1912.  She often appeared at events related to the ship Titanic.

And Barbara Dainton?  Her funeral took place at Truro Cathedral in Cornwall, UK on Monday 5th November 2007. She was a Titanic survivor as well.  But unlike Millvina, she didn't want anyone to know it.

What does tomorrow hold?  In the film Titanic the elderly Rose explains:
1,500 people went into the sea … when Titanic sank from under us …there were twenty lifeboats floating nearby … and only one came back. Six were saved from the water … myself included.  *Six*.  Out of 1,500. Afterward, the 700 people in the boats had nothing to do but wait … wait to die … wait to live … wait for absolution … that would never come.

The kingdom of Godis among you?  Do not be weary in doing what is right.