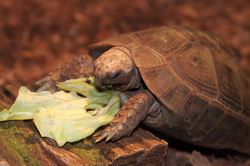 There's a shaggy dog story from where I was brought up about the Texan ranching cousins visiting their Wiltshire farming relations.  They
were going to say a few days with them in their little farm cottage set amidst  tiny hedged fields and home to their three dozen cattle.
On arrival, first things first, the Wiltshire farmer proudly took his
cousins on a tour of his estate - at every point the Texan husband commented that what he saw was tiny in comparison with the Texan equivalent:  call that a field, we've got backyards bigger than that; call that a tractor, my kids got toys bigger than that; call that a heard of cows, we've got more pet pussy cats than that, etc.
This all got to the Wiltshire farmer somewhat, and at supper he left the
room for a while.  The Texan guests were first to bed.  Soon there was a scream and a Texan appeared at the parlour door holding at arms length what he had found in his bed, the family tortoise.  Trembling, the Texan said, 'What do ya
call this?'  The farmer replied, 'That be a Wiltshire flea, and I bet thee hasn't got bigger than that in Texas.'

I hope American visitors will forgive the stereotypical joke.  This sermon is a response to requests to talk about prayer and the notion of a flea the size of a tortoise is a pretty good image of prayer as thinking BIG.  In prayer we imagine BIG
things because by the grace of God we can embody BIG things if we can be lift our sights and calm our fears.
It's all there in our first scripture reading today:
I pray that you may have the
power to comprehend, with all the saints, what is the breadth and length and
height and depth, and to know the love of Christ that surpasses knowledge, so
that you may be filled with all the fullness of God.
We can think BIG because God's aim for us is BIG - Now to him who by the power
at work within us is able to accomplish abundantly far more that all we ask or imagine.
Stop thinking and living small.
Pray BIG because in God's world new possibilities are constantly emerging.

Idling through the job advertisements in a national newspaper one day week my attention was caught by one  that began:

The disciples think this is the end.  In the version in Matthew, Mark and Luke they urge Jesus to send the crowd away.
There is no way we can cope with this lot - 5000 men, does that mean there were even more when you count the women and children as well?  There were only a handful of towns that had populations as large as that in those days. This is an awesome crowd in the disciple's terms.
This is the end, it's got to stop.  They want to close the experience down.  Make it manageable, make it small.

Too often our praying is like that.  Think of the way we use 'Amen'. As that brilliant storyteller Walter Wangerin reminds us we have turned 'Amen' into the closing of the door. In our praying 'Amen' has become the equivalent of the film credits; the assumed end that moves us hurriedly on to the next thing.  But in John's Gospel it's not like that; there the Amens come not at the end but at the beginning of Jesus' profound statements. The phrases we are familiar with as 'Truly, truly, I say to you...' are actually 'Amen, Amen, I say to you...' The way Jesus uses the word is as an emphasis of significance and
importance. His 'Amen' doesn't close things down but rather asserts something's worth and urgency. It is literally being 'up-front' with matters that have to be considered.

This is how the 'Amens' of our praying should be, for a beginning not an ending. Our reflection on human circumstances
rouses from us an 'Amen' that requires more than a detached, remote view of the world outside our own experience. The word embraces our affirmation of God's purposes in what we are praying. This is our exclamation that we are not turning
aside from praying, but rather striving to incorporate our prayers into our actions and our faith. It speaks of our certainty about God's love for this world.  The 'Amen' is not an end but a declaration of assent. Not a closing of our attention, but a determination to extend our prayerful involvement. What we learn in prayer, we work to live in our lives. The 'Amen' is the beginning, not the end. It's about thinking BIG.

On that crowded hillside that night there was only one other person beside Jesus willing to think BIG, and that was a young lad - a vulnerable child is the only one who gets it, the only one willing to share all he had so that others might eat.  His head is where his heart is -but for everyone else only the experience will put their heads and hearts together.

The lad has five loaves, reminiscent of the five loaves the shepherd boy David had when he half-starved and fleeing from Saul was fed by the priest of Nob from the 12 holy loaves in the temple.  Five is also the number of Israel - four stands for the whole world and One is the number of the Eternal One.  Israel's vocation is to bear witness to the One to all points of the compass.  4+1=5. The grass bears a reference to David as well - the green pastures of David's psalm.  For the gospellers Jesus, the son of David, is the good shepherd who leads his sheep to green pastures.

And there are other echoes too - the widow of Zarephath shared her last loaf with the prophet Elijah, but the meal in her
pot never ran out, nor did the oil in her jar; similarly the prophet Elisha commanded a great crowd to be given food from the few loaves of barley bread someone had given - he servant scoffed and said it would never be enough for  such a great crowd, but Elisha insisted that the bread be shared and there was still something left over.  As we heard last week, Herod holds a banquet and blood flows; Jesus holds a feast and everyone is revived.

For the Christian part of praying has to include indwelling these ancient texts so that we pick up these echoes and let
our hearts and minds be led by them.  Meet God who changes things- whether by some radical burst of energy that
stretches our imagination or by simple sharing - it doesn't matter.  By whatever means the crowd is fed, and for a moment at least the disciples and the crowd experience what the trusting lad already knew, God is at work as he was in the days of Elijah and Elisha and David; expect great things, choose abundant life, seek the redeeming possibility, train your imagination and  your will to seek God's presence - be rooted and grounded in God's love not the dire fatalism of earth bound humanity.

Pray BIG, God's possibilities are endless; all it needs is the imagination and trust to share a few loaves and two tiny fish, a sip of wine and a fragment of flat bread.

Her problem was that she felt guilty that she prayed too much. Each evening she carefully went through a mental list of her whole family, her friends and neighbours, her local church, and the things of the world's needs that had struck her that day. This often involved two hours of effort. Sometimes she fell asleep during her intercessions, necessitating a top
up session the next day. This was prayer most definitely seen as work, but work that was much enjoyed. That is where the guilt came in; for she worried that she was indulging herself by praying so often and for so long.

One of the troubling things about faith or its lack, is that it is all too easy for those who have no need to feel weighed down by a sense of their own sin, do so; whilst those who should feel some sense of their own inadequacies or failings too often do not feel them at all. To enjoy intercession as a fruitful work to be done is surely a great good, but it did not quite feel that way to the person involved. What was obvious to an observer was not as obvious to the one worrying about it.

The person praying was someone of great age with a lively and engaged intellect. I cannot help feeling that the two things were closely linked. Reading, conversation and thoughtful reflection on happenings near and far fuelled the desire to pray, whilst the praying stirred the concern to know and understand what was going on in other people's lives.  I cannot believe it was purely coincidental that many people confided in the lady concerned. She did not tell many people the extent of her intercessions, yet somehow it was apparent to lots of those who knew her that it was important to let her know  what was going on in their lives.

Far from being an indulgence, her regular  intercession was a powerhouse for other people's good. Indeed, at her funeral
many people said that there was 'something' about visiting her and talking with  her that was different and special, yet the conversation was usually warmly ordinary. All present knew that she had fulfilled a significant ministry in their lives, yet few would have used that kind of language.

Any of us thinking it through carefully is likely to worry about our prayers, though I cannot unfortunately admit to
worrying about them being too long. Indeed at our most rational moments we may question the whole idea of what we are doing. When that thought comes to me, I think on the lady who worried that she prayed too much and I remember how her
prayers touched all who knew her though we usually described it as nothing more than the ordinary concern of a warm-hearted person.

When I see in the chapel the candles lit by passers-by, or the notes asking prayer left on the noticeboard, I imagine
that same trusting sharing being applied to the church as a whole. Despite the many knocks Christians receive from a preoccupied and secular world, people still regard us as warm-hearted enough to receive their deepest concerns and
turn them into prayer. In an ordinary and everyday kind of way, it is simply a job worth doing. Pray BIG, not fleas the size of tortoises but hopes the size of God.

And the people said, Amen.