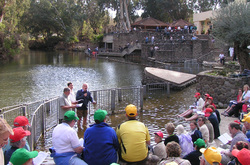 ‘And when Jesus also had been  baptized.’ How strange those words are. John’s baptism we are told was ‘a  baptism of repentance.’ This was an action for those who knew there was  something wrong with their relationship with God and other people. Here sins were washed away. One of the reasons the religious leaders hated John so much
was that he went about requiring repentance of the chosen people. Baptism was a rite for Gentiles who wanted to become Jews. They needed uncleanness washing alright; but it wasn’t something for good Jews. To them John’s insistence was a scandal.

The logic of that criticism is the same for Christians. If Jesus is who we say he is, then the last thing he needs is baptism. If it’s for sinners who know their need of forgiveness, it doesn’t seem appropriate that Jesus enters that water. Yet all the Gospels agree that enter the water he did. You can see how the Gospel writers struggled with this: Matthew has John arguing with Jesus; Mark makes more of God’s word from heaven than the watery event itself; John has it as the thing that convinces John of Jesus’ authenticity; and, as we heard, Luke believes it to be the final affirmation to Jesus that his way is God’s choosing.

Perhaps the first clue to the significance of Jesus’ baptism lies in what John was actually doing in his insistence on repentance. He was calling the sons and daughters of Abraham to baptism. This was unheard of. John in his actions says that the moment is unique. It’s as if John is saying, ‘You haven’t felt this before, but I’m telling you now that you need God as never before, and the best way of realizing that is to be baptized.’ And many responded. God was doing something new – doing something new in Jesus. A new age has begun. Jesus’ own baptism marks that.

If the first clue is about time, the second is about personality. What is this God John talks about like? If those who responded to John had a new awareness of their own need of God, was that need going to be met by the same old religious responses? No, in this different time you should know that God acts in a way you don’t even notice. God isn’t remote. God isn’t aloof. God in the person of Jesus enters your experience. He will go through what you go through. He will be baptized.

Mr Graham scared me when I was a junior at secondary school. As long as he was in charge of games his fearsome
shout from the sidelines reduced me to a quivering wreck. I couldn’t do a thing right. But when he left – to be a Redcoat at a famous holiday venue – and was replaced by Mr Spinney everything changed. Mr Spinney used to join in – teaching
us by doing things alongside us. I was never shouted at again. My confidence grew – I even represented my school and my county. That’s what Jesus is like in his baptism. He involves himself with his people, and that will be the mark of
his saving love in all things. And that gives us the courage to live the life of  faith.

Made part of a community

The third clue is that our Christian baptism isn’t the baptism John offered. Its likeness to what John did is in the fact it is a turning away from something; yes, it is a sign of repentance. But its difference is that it is primarily a turning towards Christ. As Christ stands with us in baptism, so we turn towards his new life and are incorporated into it by our baptism as Christians. We stand the church-side of the cross in way John could not.

By baptism we enter the deathly consequences of sin, and we rise to the resurrection life of the one who
conquered that death. Christian baptism always begins in what Christ has done  for all. As our text tells, John ‘proclaimed a baptism of repentance.’ Christian baptism is that, and more. As Colin Morris declared, it is ‘a proclamation to
the Church and through the Church to the world that all live, move and have their being in God.’

As someone said, it’s a bridge not a road-block. In baptism we don’t reach the end of the road, rather we turn
the corner into a new roadway that opens life up in striking ways. Bought, as it were, by the cross, we are made part of Christ’s new community. Baptism always speaks of belonging – being part of Christ’s people. It always challenges us:
are we on Christ’s road or not?

First published in The Preacher no. 148, the magazine of the College of Preachers.