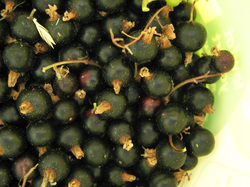 They grow on bushes, so the fruit are always in easy  reach. The whole plant is strongly aromatic – leaves and branches make for a heady smell even before the fruit comes. From midsummer the green fruit ripens
to an edible berry that is very dark purple in colour –well, almost black – with a glossy skin and a persistent little ‘nib’ of dried flower at the end of the berry. The berries hang downwards like tiny grapes, but the intensity of their  flavour and colour is unique. What are they? Ribenas, of course, and there is an ever popular British fruit squash named after them and their rich vitamin C – Ribena.

Except they’re not actually called ribenas. It was my eight-years-old daughter who called them that. She had no idea they were really
called blackcurrants. She was brought up on the drink and the real thing looked just like the bottle label – they had to be ribenas. It took some time and persuasion before she would concede that perhaps they really were called blackcurrants.

Of course that’s the advertiser’s dream – people calling things by their trade name in preference to the accurate description. Let’s hoover the carpet – so much easier than vacuum cleaning it! Though you can hoover with a dyson – now that’s properly confusing.

They call it ‘brand-verbing’ – Xeroxing a message in parcel that you’ve Sellotaped with a label on it written in Biro. Inside is a Frisbee and a Thermos, which you know will raise a tear when it’s opened, so you’ve got a Kleenex  to hand. And there’s a Post-it on the fridge to remind you to take the present to its recipient on the right day. Brand names used as if they are something more. Google it and see if you can find some more!

Naming things is really important. In the ancient story the first man is required to name things. This is a privilege and a burden. Get the names right and everything fits into place. Get the names wrong, and things will fall apart; imagine a lion labelled as a lamb, or a cobra as a puppy. Names can lie, words can lie, it’s important the man gets the terms right. And we may assume that he does, because he recognises that none of the amazing creatures that pass before him are his partners. As wonderful as they may be, as scary or as charming as they may be, he knows that none of them are help-mates, soul-mates to him.

Beyond naming, the man needs to know a companionship that secures him in life; that speaks to his aloneness and over comes it; that is near him in all things and yet is clearly other than himself. In the storyteller’s terms; part of him and yet not him. Like so many ancient stories, this one seeks to answer mundane and deep things at one and the same time. The
mundane thing is to give some account of why men and women have different shapes. This is like Kipling’s Just So stories – you know, how the leopard got his spots, how the camel got his hump – but here it’s the male and the female shape. ‘Ah, they’re different,’ says the storyteller, ‘because man is missing a bit that became woman.’ But as the funny story is told, so is a very serious point made: man and woman belong together. ‘They become one flesh,’ says the storyteller.

The man is still in the naming mode and he asserts the reality as surely as he named the creatures: ‘this at last is bone of my bones and flesh of my flesh.’ The intention is a relationship of closeness and yet difference, of fundamental oneness that doesn’t destroy the essential apartness. The language is always difficult, made all the worse by the fact we live in
times when many of us hesitate to know just how we should order our relationships. Things are very different from how they were even a generation or two ago, and yet the commitment to commitment remains. We want to be able to
trust one another; we want to be able to rely on what another person says; and we take delight in people who obviously go the extra mile.

So whatever else our readings today may be about – the nature of marriage, the reality of divorce, how couples can harm and hurt one another – they are also about partnership, togetherness (overcoming aloneness), and what it means to help one another. That’s what the Genesis story begins with – and that’s what we focus on today in using these readings in our harvest: partnership, togetherness, and help.

Man is in partnership with God –it’s his naming of things that counts; God could have done it otherwise, but he is content not to do the naming. There’s togetherness here as well – God cares that the man is alone; God knows that his companionship alone is not enough. And there’s help as well – God assists the man in finding his helpmate – the creation of woman requires a deep sleep and a healing of flesh. God assists, he makes it
happen.

Partnership; togetherness; help – things that make life worth living. I was privileged to spend time this year at the Olympics, and it was a real privilege for the atmosphere was electric. There was a shared spirit of optimism, community and good cheer that was infectious. ‘Off to the Olympics,’ some stranger shouted at us, ‘You’ll have a great time.’ And we did. Partnership. Togetherness. Mutual help.

Unfortunately those things expressed this week all too tangibly in tragic circumstances – those who gathered alongside the funeral corteges of Constables Nicola Hughes and Fiona Bone. ‘I stood on the street to show solidarity,’ said someone who had travelled into Deansgate. Or the hundreds who have tramped the hillsides and byways of Machynlleth looking for little April Jones, ‘We understand fully why people feel the need the need to do something practical to get out and try to find April,’ said one senior police officer. Partnership, togetherness, help – said in people doing things – though everyone all too aware that their doing is a poor thing when it comes to the suffering and loss of those most closely involved.

When Jesus is asked the hard question about divorce his answer mentioned ‘hardness of heart.’ Then later when his disciples tried to keep the children away from him, he became indignant. Did you notice that both those instances Jesus overturns  the usual way of thinking? His critics think that the hard question about divorce is all about men. No, says Jesus, women are equal in this. Or, in the dispute about the child they make the assumption that the children are an undeserving nuisance. No, says Jesus, children are important in their own right – they have something to teach you!

God’s  purposes direct us towards partnership, towards togetherness, but we become hard hearted, stern with those in whom we should delight, and we bitterly seek our own way. It isn’t meant to be like that, says Jesus. ‘You see this little child, her enjoyment of things, her readiness to play, her willingness to sit on your knee for a story, her openness to the world about her – that’s the way you should live. Don’t be hard-hearted and calculating. Don’t hem your life about
with ‘ifs’ and ‘buts’ and all the things of self-seeking wariness.’

‘Whoever does not receive the kingdom of God as a little child will never enter it.’ The words of Jesus could not be plainer. If you want to enjoy the kingdom of God – and who doesn’t? – the only way to do so is to be entirely
dependent on God. Name the world as the place in which, before anything else, we receive from God. Don’t begin with your failures. Every day berating yourself for what you can’t achieve, what you haven’t done. Don’t begin either with your
successes. ‘I’ve done so and so; I’m in control here; I can do this no matter what they throw at me.’ When your confidence gets knocked that’ll all fall apart. In fact don’t begin with ‘you’at all – begin with God.

Name the world ‘God’s’ – begin there and other things will fall into place. Acknowledge that dependency first and you’ll find it changes how you see things. Not a bad text for harvest then, for whatever else harvest nowadays points us towards, it primarily speaks of dependence –our dependence on the world of nature, our dependence on one another – the trust necessary to make the whole system of production, distribution and consumption work. We know as never before how we are inter-connected. A few months ago I needed to buy some additional memory – a very modern idea that! – but I couldn’t because floods in Thailand had knocked out essential production. We’re connected and dependent –for food and much else. Name that fact.

Naming God as our first dependency changes things. It lets us in on a world ofpartnership, togetherness and help that our self-centredness so easily blocks. Naming the world as God’s world changes what we see. It lets us see ourselves as
we really. Blackcurrants not ribenas!