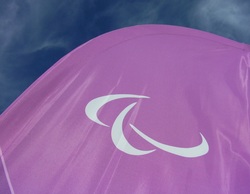 
Beverley Knight sang her heart out at the opening of the Paralympics taking a song that has been an earlier anthem for causes and turning it to a contemporary challenge. As hundreds danced under a towering version of Marc Quinn’s sculpture ‘Alison Lapper pregnant’ we knew that that huge naked body and the song were questioning us. What were we going to see in the days of the games? Were we going to look in excitement and awe at breathtaking skill and achievement? Or were we going to look in condescension and pity? Were we going to be eager spectators of human prowess or voyeurs of those labelled namelessly as ‘the disabled?’ Changing attitudes; changing hearts; getting the language right, and seeing people anew – big issues made immediate and pertinent in an extravaganza of sporting excellence. Attitudes and opinions make such a difference.

But it’s not always the big social issues, is it? She couldn’t bear to go without ‘putting her face on,’ as she called it. The thought of anyone seeing her without her make-up was something she simply couldn’t countenance, in any circumstance – it was, for her, beyond shame. An extreme attitude? I don’t think so. Don’t each of us in some way or another harbour an
anxiety about how other people see us, about other’s opinions of us, about how we fit in or not with social expectations?

We wear clothes that are in fashion. We like to be seen to use the ‘in’ gadgets. We dress appropriately to the occasion (or perhaps inappropriately, to make a similar point!). We do and say the things that allow us to fit in. We are mortified if we unknowing cross some convention and embarrass ourselves and others. We care about what people say about us. In some
deep way we define ourselves by what other people say of us, think of us.

And Jesus said, ‘Who do people say that I am?’ And all of us know the power of the question. What other people say of you, think of you, do to you, can have such a severe impact. We know that for ourselves. How much more so in an honour bound society like first century Palestine? There everyone had their place; the social boundaries were largely fixed. To cross those boundaries could mean spite, ostracism, shame, even death. What people said of you mattered, really mattered.

In our own day, we wonder at occasional news reports of parents beating or even killing a daughter because of the shame they believed she had brought on them – yet we appreciate all too clearly what harm can be done by what is said of a person. Yes, we think in terms of reputation and status, but these things aren’t so distant from more visceral, instinctive
responses.

I was a nurse in the 1970s and more than one of the people for whom I cared had been committed to hospital years before as mentally degenerate because they had had a child out of wedlock. By the time I knew them they were deeply institutionalized and beyond ordinary independent living. It matters who people say you are.

'Others say of you Jesus, this or that; but I say you are the Messiah.' The disciple Peter, as ever, in the heat of his excitement doesn’t seem to get the dangers in his recognition of Jesus as the Messiah. Go around blurting this about, Peter, and a backlash will soon be prompted. Yes, you can see Jesus as he really is, but that doesn’t mean that everyone else is just going to fall in with what you say about him. ‘Jesus the Messiah’ is an altogether more dangerous naming than ‘Jesus of Galilee.’ You had better watch out for the consequences of saying that about him. People won’t take it kindly.
There’ll be a reaction. It’s not for nothing that Jesus orders them ‘sternly’ not to talk about it.

And then there’s another problem – Peter in his love and enthusiasm calls Jesus what he is, but in getting the label right he entirely misses the consequences of a Jesus-style messiahship. He has been told not to discuss that messiahship outside their circle because to do so will provoke condemnation and hostility. Others will be all too eager to turn that idea into
a charge of blasphemy, disloyalty, derangement or rebellion. Sure, Peter knows those things aren’t true, but he still hasn’t got his mind around what Jesus-style messiahship actually is. In a perverse kind of way, what Peter understanding of what he says about Jesus could in fact reinforce the hostility of those who would see the messiahship claim as nonsense.

Whereas Jesus as Messiah must be kept secret for the moment; the character, the compassion, the determination of the person Jesus and what that means about how he does things, can be shouted from the roof tops. We are told, ‘He said all this quite openly.’ The loving heart of God won’t be diverted, this self-giving draws no violence on anyone else but himself, and will be born willingly. Jesus will live and die for that love at the place that is the heart of his people – the holy city Jerusalem. Let everyone know. Let this be said of Jesus, he will suffer, he will be rejected, he will be killed,
but he will not stopped. ‘Who do people say that I am?’ Let the answering response be: ‘They say you are the suffering one who never answered hurt with hurt.’ ‘They say you are the Man of Sorrows who took all that violence and spite
could inflict but never stopped loving.’ ‘They say you are the Lamb of God whose offering sets all people free.’

Don’t deny these things, Peter, for to deny them is devilish; it lines you up with evil, hurt and harm. Satan’s way with the world distorts and twists and obscures, corrupting hopeful possibilities into conspiracies of mistrust and violence and perversity. It’s as if Jesus says, ‘Wake up, Peter,’ I am who I am. What you know of me in my teaching, and action,
and companionship, is what I will be in my suffering and end. You know me. I am what I am, and what I will be, whatever spite comes my way. Think on that question again, Peter, ‘Who do you say that I am?’ Get this straight or, God
forbid it, you’re with the devil.

How Peter must have winced at that.

Then Mark the gospel writer does an interesting thing in the telling of the story. Did Peter sulk? Were there further crossed words? Did Peter apologise? Was there a discussion amongst the disciples? Who knows – Mark does not tell us. We might imagine the most likely development of the encounter, but Mark does something different, I think. He makes one of those time- shifts, as only artful storytellers can. Mark says Jesus ‘called the crowd with his disciples, and said to them, ‘If any want to become my followers, let them deny themselves and take up their cross and follow me’

In other words, this teaching isn’t solely to Peter or to the rest of the twelve disciples; it’s to the crowd of would-be followers. It’s to that often harassed and fearful little church that Mark was writing for; it’s to us in our fears and waverings. ‘Have faith, be courageous, do as I do,’ says Jesus. Don’t let fear rule your behaviour, don’t let self-concern crush your spirit, don’t lose heart.’ Trusting in God will lead you to a new way of living that nothing and no one can destroy. It’ll let you find your real self – the self God intended. This is a message for all the followers of Jesus, in every
age and place.

Who do people say that we are? Let the answer be loud and clear: I am what I am – a child of God, a follower of Jesus– my home and my destiny is eternal love that won’t be thwarted – ever. Let the detractors, the sceptics, the antagonists, say what they will of us, but we will hold fast to who we are by the grace of God.

Hold fast. Don’t pretend it’s easy. Sometimes it feels like we’re losing it. Sometimes we miss the clues that reassure us who we are – whose we are. The opinions of the detractors fill our heads and we can’t hear the gentle persistent voice of Jesus: ‘You are mine, have no fear.’ Certainly that happened to Peter. He only heard the words about suffering and rejection. The ‘and after three days rise again,’ passed him by completely. That reference to ‘the third day’ should have been his reassurance. Jesus is saying salvation is coming, whatever the hurt and loss. God is to be trusted through it all. But Peter can’t hear it – he can only hear the common opinions, the easy expectations, and the glib phrases of idle chat. Peter, listen to what Jesus is saying. Hear that, not the common hubbub.

And we’re back to the idea of shame and honour. To be ashamed of a person is to disassociate yourself from that person; the people you avoid because you don’t want to be tainted by their behaviour, their outlook, and their words. Those who by their actions and words distance themselves from the cross-shaped fullness of life Jesus offers demean themselves and others. They are the ones who separate themselves from the life God offers. But those who stand up for the Jesus way will find Jesus standing up for them as well.

Yes, Peter speaks up. He says who Jesus is, but he hasn’t yet understood the depth of Jesus’ identity. But in time he will, and he will join the church in knowing what Jesus-shaped messiahship is. He will join the church in declaring Jesus is Lord in the certainty that nothing and no one can destroy the life that gives him. And each of us can join with him in saying I am
what I am – a child of God, a follower of Jesus – my home and my destiny is eternal love that won’t be thwarted – ever.

I am somebody by the grace of God.
I am what I am.