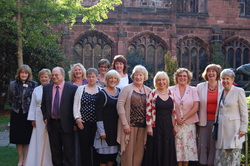 The sky is darkening quickly. Twilight will soon end, but it’s a couple of hours before Uncle Jack will be home from work. I’ve settled down in the front room with my Gran. She’s going to have ‘five minutes peace’ as she calls it. The fire crackles in the grate; no electric light is on, and as daylight fades only the fire’s sparkle will illuminate the room. I watch the shadows change and the flames of the fire twist and flare. I can’t remember how old I am, for the scene was repeated over and over again through my childhood. I only know I was at home. It only needs the smell of coal and elm logs to take me back in an instant.

What smells I wonder took Jesus back to his home? Was it the workshop smell of freshly planned wood, Mary’s stockpot pot, or the herbs outside the door made fragrant by the warmth of the evening sun? We will never know, but we do know there were for him reminders, as there are for each one of us. These human touches were his, as they are ours. Jesus comes to the place he knows as home.

Naomi too makes the journey home. Years before she had gone in the opposite direction– running from famine in the hope of finding a new home amongst foreigners. And for a time it had worked. But then her husband and her sons died – and in her bitterness and loss she found that she was after all far from home. What could a widow with nothing do, except return home? No joy for her in this homecoming– at least initially – but if she was to live by the charity of others that would be more likely amongst those who knew her as one of them? Or so she hoped. We might wonder whether she was fooling herself – after all the Jewish people had to be constantly reminded of their duty of care towards orphans and widows. But nevertheless homeward she trudged.

Home has a particular draw. We all know it. However we define the place, whatever the circumstance, however the memories are provoked. Whether the bitterness of experience, like Naomi; the anticipation of making good, like Jesus – we are told his former neighbours were astounded at his wisdom; or the cosy comfort of a seemingly simpler world, like me at my Gran’s house. Whatever, home speaks of belonging, care, safety, security, recuperation, acceptance, and the
rest.

Whatever else pastoral work is, it is at heart helping people to feel ‘at home’ no matter what life has thrown at them. The turns and vagaries of life can make any of us think we’re in hostile territory; can rip away our sense of belonging; and can reduce us to the dispossessed. We all need on occasions the reassurance that in God’s ordering of things we are never
dispossessed. We are always ‘at home’ because God never abandons us. When life tells us otherwise, it’s a sham and a cruel mirage – but how hard it can be to see that yourself. We stand in need of a listening ear, a reassuring word, a
tangible presence, to bring us home – to bring us to the knowing of the fact that we are at home. That is pastoral work. It is as simple, and as costly as that.

Naomi returns home – but her true homecoming is only achieved through the action of the foreigner, Ruth.

Orpah and Ruth have been good daughters-in-law to Naomi. She is thankful for what they have done, she loves them for the love they have shown, she know they deserve a second chance and she longs that they may have that. Her part in their lives, however, has been cruelly cut short. There is nothing more that she can do for them. Their ways must part. Orpah knows the sense of it –reluctantly she must return to her homeland as Naomi journeys towards hers. A foreign ‘hanger-on’ is an added disadvantage no widow needs. Heavy-heartedly Orpah says her final farewell. She will never see Naomi again.
The inevitability of life’s pains is underscored in deepest ink.

But Ruth will have none of it. Inevitability is not part of her language. She refuses to let fate, or harm, or prejudice have the last say. ‘I know I am a foreigner; I know my presence will complicate things; I know I will stick out like a sore thumb and be the butt of stares and scorn, or worse; but my loyalty and love will always be constant. I will never leave you, Naomi, no matter what.’

Such is the determination of Ruth. And it’s a risk – a big risk when starvation already threatens them both. Sometimes the pastoral response is like that. It doesn’t necessarily come easy. The story will tell of a wonderful outcome. Ruth’s determination will be justified and more – but at this moment she and Naomi are trusting each other and trusting God in a way that seems on the face of it hugely hazardous and chancy. Doing the pastoral thing isn’t always obvious or unproblematic.

Jesus comes to his home in the anticipation of making good, as I said; we are told his former neighbours were astounded at his wisdom. The adulation, however, doesn’t last long. At first they marvel at what he said, ‘Where does he get it from? He surely tells it as it is. Real insight this guy. He does such remarkable things.’

Then in an instant they take against, ‘Hang on, his mum’s Mary. You remember her who always had that stockpot on the go.’ ‘Yes, he’s brother to James, Joses, Judas and Simon. Would that any of them were as good with tools as their father was? That James is a real cobbler together of things. I won’t pay him to do anything again.’ ‘Didn’t they have trouble marrying off some of the girls?’ We can imagine what was said. ‘They took offence at him,’ Mark tells us. They simple couldn’t believe that God was specially and particularly at work in the life  and teaching of this man they knew all too
well.

Jesus came home but he wasn’t ‘at home.’ He is amazed at their unbelief, and could do little there. He refers to himself as a prophet – ‘Prophets are not without honour, except in their home town, and among their own kin, and in their own house’ (verse 4), but they will have none of that, and refer to him as ‘the carpenter’ (verse 3). That word in itself discloses a lot about what they think of him. It means someone who has been trained, and could be translated as craftsman, artisan, smith, or even stonemason. Of course traditionally we always use for it the term ‘carpenter.’ Now in a small-scale, largely peasant society like first-century Palestine, such tradesmen had to move about to keep themselves in work. That meant often leaving wife and children behind to fend for themselves. People gossiped and speculated about what such men did when they were away from their families. In a world where place and a family’s place in that place mattered a lot – carpenters and other itinerant workers were suspect and often thought of as only on the margins of respectable society. Calling Jesus ‘a carpenter’ doesn’t bring with it the respect we might assume. Jesus’ training didn’t necessarily commend him to the permanent residents of Nazareth. A good excuse that, for taking umbrage at his religious
teaching.‘This man is above himself,’ they thought.

The same was no doubt said of Ruth: ‘She is above herself; she is nothing more than the Moabite woman who came back with Naomi.’ And did they spit as they said it? Certainly the reaction against Jesus was murderous according to Luke’s version of the trip to Nazareth: some wanted to throw him off a cliff! (Luke 4.30) Jesus does not carry with him the approbation of his home town. The opposite is true of Ruth – everyone knows she is from hated Moab. But the consequence is the same – both will find their intervention and action acceptable in some places and not in others.

That is the reality of pastoral work – even our Saviour doesn’t find a ready welcome always. The Christian Community Bible translation ends this section of Mark like this: ‘Jesus himself wondered why they would not believe.’ (Mark 6.6) We will often wonder why a helping hand or a listening ear is rejected. Such is the burden of what we do – we offer but we do not command. We stand alongside – but we never stop the other person moving away. We commend our Lord’s grace –but
it always remains a gift to be received or denied.

Pastoral work is at heart simply helping people to feel ‘at home’ – sometimes that task is risky, sometimes that task will be denied,
but take heart
thepromise is Ruth’s
but it’s also God’s word to us:
Where you go, I will go;
where you lodge, I will lodge;
your people shall be my people.
Naomi saw that she was determined and so said no more to her. They went on together.
With them we journey to Bethlehem – to find our home.