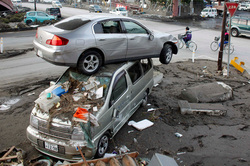 It’s almost a  year since the earthquake and tsunami hit north-east Japan. One year on and the debris is just beginning to wash ashore on the beaches of the western USA. They are expecting human remains amongst the flotsam. Four thousand people are still missing.

One year on and the immensity of the devastation has hardly been touched by the efforts to clear and restore. The destruction testing the resources of the third richest nation on earth. Whole towns and villages just gone. But, of course, it’s the human cost that strikes home – more than 20,000 dead. A mother grieves for her 12 year old daughter lost in the water and mud. Determined to find her body despite the end of the official search, she gains her licence as a heavy digger operator and borrowing a digger starts turning over the acres of deep mud. Koharu’s body is eventually found, but not by her mum, Naomi. She was washed ashore on a beach seven miles away.

What’s to be  said to such hurt and loss? The weight of it is awesome; shocking; terrifying. What’s to be said to tear-stained Naomi and the countless others like her – a police officer’s family in Cumbria, a Granny in New Orleans, a market trader in Dhaka, a factory worker in Gansu? Victims of deathly flooding – thousands upon thousands.

Now read the story of Noah and the flood. It’s terrifying. What are those toy sets about? Brightly coloured ships and pairs of smiling animals to push through the door – if giraffes, and elephants, and meerkats and all the rest of the menagerie can
be said to smile. Children’s plastic playthings obscure the reality of the story. Flood; tsunami; devastation; death.


We heard the  promise: ‘Never again shall all flesh be cut off by the waters of a flood … never again shall there be a flood to destroy the earth.’ (Genesis 9.11) Not again after Noah, but thinking on Noah is  enough to curdle your blood and fuel your nightmares. Noah, his immediate family, a representative wildlife species escape the waters – but none of the
rest; the whole human and animal population gone. Tell this story carefully because is seems to speak of an arbitrary and angry god who reeks havoc on the whole world. Oh, yes, I know a reason is given: ‘The Lord saw that the wickedness of humankind was great in the earth’ (Genesis 6.5), ‘the thoughts of their hearts was only evil,’ ‘and he was sorry that he had made humankind on the earth’  (6.6). So the lot have to go – no attempt at due discrimination, no second
chance, no weighing of responsibility, no judgement in the sense of discernment. Away with the lot of them. We do well to remember that Abraham had a rather more hopefully dialogue with God about justice and discernment: ‘Will you really let the just perish with the wicked?’ (Genesis 18.23) he asked. And received the answer that even for the sake of ten, God would not destroy (Genesis 18.32). But that’s to move on in the tale. Here God is portrayed as altogether less merciful.

And then think on the rainbow: ‘When the bow is in the clouds, I will see it and remember’ (Gen 9.16), ‘I will remember my covenant that is between me and you and every living creature of all flesh; and the waters shall never again become a flood to destroy all flesh.’ (9.15). You might think that the rainbow is reassurance for humanity, but that’s not what it says. It’s a reminder to God – don’t let that rage get the upper hand again, remember what you promised, no more total
destruction. This is a self-limiting sign. Note to self, says God, musn’t get so angry!

The sages who penned the story hit the nail of the issue right on the head. Humanity, so capable of great things, so capable of love, so noble of intent – is also damnably capable of evil, violence, and corruption. How can that be? What’s to
be done about it? The issue is spot on; but the resolution is well awry. After  the story nothing much has materially changed. Humanity survives and goes on to repeat the former evil, apparently now with impunity. The rainbow will stay
God’s hand; the sentence of flood won’t be repeated, so humanity can do even worse – and get away with it. It can even crucify the son of God.

It’s hard to see  grace in the Noah story. I’ve a feeling that the writer of the First Letter of Peter had a similar thought. Did you notice it? He writes that Christ who suffered for sins once for all, alive in the spirit, made a proclamation to the
spirits in prison (1 Peter 3.18-20). The crucified one proclaims good news to  the disobedient even from the ‘days of Noah.’ Those who were not saved from the waters in the time of Noah are now saved by the waters of baptism into Christ’s
saving death – one for all. The watery death of so many failed to change human hearts, but now the death of one saves many. What the flood prefigures is what  water signifies – ultimate corruption and death – but that corruption is  overcome by the loving one who passes through those deep waters to signify not  death, but grace. God’s response to sin is grace – unending and immense, wider than any flood. If God’s hand was stayed while Noah built the ark for the few, now God’s hand reaches out in order to bring you to him (v.18). God’s hand reaches beyond death, destruction and the terror of the
ages.

And that hope is there from the very beginning of Jesus’ ministry. John the Baptist’s baptism was one of repentance but when Jesus subjects himself to it it becomes another prefiguring of his readiness to enter the waters of death for his people. Again a voice from the heavens confirms the point: ‘You are my Son, the Beloved; with you I am well pleased’ (Mark 1.11) and nothing, not even a violent death, will overturn that promise.

But immediately that same Spirit of God that had descended upon him at his baptism drives him out into the wilderness. He is alone, with no support, nothing and no one to fall back on. And worse, he finds himself surrounded by not only the danger, the  risk and the privations of the wilderness, but also by both good and evil  forces; another prefiguring of the cross. This Jesus goes into the wilderness  for his people – he doesn’t call down the fires of hell on them or a deluge of
punishment. No, he faces the terrors and makes of them something that can teach love. Terrifying aloneness and risk will not stop him. No hint of vengeance will mar his love. From the very start this Jesus will transcend the forces of evil.
This Jesus will proclaim good news, and will live and die good news – never again will the flood of evil destroy all  flesh.

Perhaps those ancient sages who so many hundreds of years before Christ penned their Noah story couldn’t imagine a God like that. Couldn’t find in the trauma and hurt that they knew any glimmer of a different way. Couldn’t see any redeeming
possibility. Couldn’t be sure that whatever happiness that came their way might  in a moment be swept away. Perhaps they only saw the wreckage of evil’s tsunami and could do little more than find some reassurance in the idea that God would  stay his hand. Angry at life’s terrors they couldn’t find God’s graciousness. But we know different.

God’s love is always, in every circumstance, bigger than death. Believe the good news.