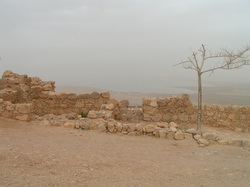 The ruins of the hill fortress of Masada
The siege had been a long one.  Their enemies had them encircled for years.  Until at the last they were the only rebel force holding out against the imperial forces.  It was only a matter of time – their defeat inevitable – or was it?  Their leader, one Eleazar, had another thought.  His instructions were that they should all die by their own hands, rather
than experience defeat.

And so they did. Every man killed his wife and children. Then they set fire to their possessions – that the enemy should have nothing.  As their clothes and tools burnt, the men drew lots.  Ten of their number were chosen to kill the rest. Each man lay down by his dead family, to receive the deathblows.  And when just the ten, exhausted by their gruesome task, remained; again they drew lots for the one man who would do
the final killing.  So it fell to the last lonely soul, to end the life of his comrades and himself.

In the early morning, the imperial army at last breached the hilltop fortress.  They set to against the fires, wondering why no resistance, why no noise?  Then in the palace in the heart of the complex, they came upon the fearful, blood covered sight.  The historian writes: [they] met with the multitude of the slain, but could take nopleasure in the fact, though it were done to their enemies.  Nine hundred and sixty people had been slaughtered there. That was Masada.

Such is the fanaticism of the Zealot.  Eleazar, their leader, was grandson of another Eleazar who had been executed by Herod the Great.  Eleazar junior’s father, Judas of Galilee, led the rebellion against the Romans in the year 6.  The imperial forces had quickly put that down, but the anger, the resentment, the fanatical determination, didn’t go away.  Others called them Sicarii – the dagger men, the assassins.  It wasn’t only the Romans who lived in fear of their vengeance – anyone who was suspected of less that absolute loyalty to their cause, or who advocated any accommodation with the Romans – were regarded as quite proper targets.  Even during this final war that ended in the hill fortress of Masada, they were still killing other Jews as they continued their fierce efforts against the Romans.

Sounds so familiar doesn’t it?    The year was 73 of our era – more than 1900 years ago, yet the unyielding, uncompromising, unflinching absoluteness of it strikes within us that deep chill of recognition.  We have heard this often, too often, too recently.

This is the fanaticism that doesn’t give a second’s thought to whose blood is spilt, nor how much, as long as the cause is advanced. This is that cold and determined certainty that doesn’t respond to rational discussion.  This is that outlook
that is so remarkably contrary to what we take to be reasonable behaviour.

What is it of the fanatic that terrifies?  Is it the certainty?  The unflinching determination?  The relentlessness?  The unwillingness to compromise?  The refusal to countenance alternatives?   The absolute boundaries that can’t be shifted?
The ruthlessness?  The unyielding pitilessness of it?   The terrifying way of the fanatic, the zealot.

Luke says, “…Jesus went into the hills to pray, spending the whole night in prayer with God. When day came, he called his disciples to him and chose twelve of them whom he called apostles:  Simon, whom he named Peter, and his brother Andrew, James and John; Philip and Bartholomew; Matthew and Thomas; James son of Alphaeus and Simon called the
Zealot; Judas son of James, and Judas Iscariot, who would be the traitor.”

Did you hear just how extraordinary this list is?  Simon called the Zealot and Matthew who was a tax collector.  The Zealots were those who considered any payment of tax to the Roman as blasphemy.  That's what Judas of Galilee’s rebellion had been all about.  When the Romans took direct control of the country they ordered a census in order to facilitate the collection of taxes, and Judas of Galilee would have nothing of it.  The issue festered away all those years from the death of Herod the Great to the time of Jesus’ public ministry and beyond.  And Galilee was the region where it was most keenly felt.   Galilee was the place where the Zealots drew their greatest support.

Simon whom we celebrate today, was from that group who would have thought themselves to be serving God by murdering Matthew, and those like him.  No wonder Jesus had to pray all night before naming his apostles!  It’s like requiring the terrorist to work with the enemy’s law enforcement officer.  We know what an intimate and important group the 12 were.  We are told on many occasions of the things Christ shared only with the twelve – yet, even without considering the other difficulties prompted by different personalities, outlooks and understandings, there is in the group’s formation this profound antagonism.

We can’t say whether the Gospel writer meant us to  understand that Simon left the Zealots to join Jesus, or that after the resurrection he joined the resistance movement. Either way, I think the amazing nature of Christ’s calling stands.  Somehow discipleship can bring together a fervent nationalist and a quisling, a person willing at some stage of his life to murder for political ends and a person who made his living by serving the political purposes of the regime the other one wanted to destroy – whatever the cost.

The language of Christ’s followers being built into a holy temple, cemented together like a wall, building on one another’s efforts and experience, for the glory of God – that kind of language, suddenly has a sharply startling quality to it.  Don’t tell me this doesn’t have a direct bearing on our dilemmas and needs today.

Some people have tried to argue that Jesus himself was a Zealot, or at least a Zealot sympathiser. I can’t see any justification for such a conclusion.  Jesus, it seems to me, always offers a radical alternative whether you be fanatical political fighter, a local fisherman, a woman ostracised by society, a fervent orthodox believer, or a questioning unbeliever.  Christ in the Gospels challenges all those characters and more. His challenge now cannot be any less exacting.

This surely is what Christ means by the world hating him and those who belong to him.  Christ always, but always offers an alternative.  The cross of Christ is a sign of life for us; it can never be used to justify death.  Immediately someone
will object that the real world is different.  St John’s argument in today’s gospel is this: Jesus has fully revealed the
love of God.  As Archbishop Michael Ramsey used to say, God is Christlike and in God there is no unChristlikeness at
all.  That love was rejected and hung on a cross to die, so we are absolutely clear about the nature of human
sinfulness.  This is no naïve turning away from what’s wrong.  No, the cross reveals the profound depth of human malice and hurt, and presents us with a real alternative.

This is so different to more everyday ways of thinking that its challenge angers people, even turns them to hate in the sense that it exposes what we are really like.

I haven’t mentioned Saint Jude.  The other Judas, the apostle about which we know the least.  We usually assume he is the person elsewhere called Thaddaeus. Because he had the same name as the Judas Iscariot, he wasn’t often invoked in prayer in the ancient church. Perhaps that’s how he came to be the patron saint of lost causes.  His name was only invoked when all else failed.

The calling of Simon called the Zealot tells us that with Christ there is always but always a saving possibility.  Our task is to live that possibility.