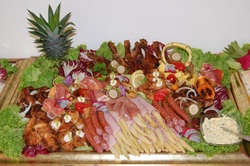 Don’t  make the meal table a battle ground – the advice of all the child care experts – but what do they know!  We don’t need TV reality shows to realise that meal tables often are combat zones: I know a boy called David who would do anything not to eat carrots - his trouser pockets were stained orange by his repeated hiding of the offending vegetable; my daughter Zoe has a similar reaction to potatoes; and I still can’t stand the gravy my mother makes!


We think we grow out of these things – but not really the case – food always remains a profoundly and potentially disturbing component of life.  Think of inter-cultural food experiences – not just the famous one about sheeps eyes, but more commonplace things. When in Zimbabwe years ago I just couldn't face the local staple 'sudza,' on the other hand my hosts thought me quite mad for eating blue veined cheese. Can you bring to mind that sensation of trying to force it down when you just can’t swallow?  A friend of mind was literally sick when I forgot her aversion to curry. Food gets to you – literally!  It's meant to – physically, emotionally and symbolically.

Through Moses and Aaron, God directs that the whole congregation of Israel is to make space in their lives for God to act.  They are to gather as families, to prepare a hasty meal of roasted lamb, unleavened bread and bitter herbs; and to
eat the meal in a hurry - loins girded, feet sandaled, walking staffs to hand - all packed and ready to go. Each family is to mark its doorway with the blood of the lamb, so that the spirit of God would pass over the house, sparing it from the plague intended for the Egyptians.  No ordinary meal this - for this is a meal in which they show themselves available to God, making room in their lives for God to act: Be ready to receive God's grace, be responsive to the immense generosity of God's love, and remember the cost of your freedom.  Don't the rabbis tell a story of God unable to answer Miriam's victory song because of his tears for the Egyptian dead?  Be ready, make room for God to act, this is a matter of life and
death.

The same issue is there in John’s account of the footwashing at the dinner table.  Be ready.  "I have set you an example," says Jesus, "do as I have done."  Too often I've heard this story of footwashing cited as Jesus acting out a lesson in humility - but it is so much more than that.  This is an absolute subversion of good order. Washing feet is a slave's task, a job for a lackey you think of as less than human - no wonder Simon Peter objects. Don't bracket this with washing your child's hair, or manicuring an aged parent's nails - no, think of it as the most intimate, or embarrassing, or distasteful thing you could imagine having to undertake for another, or someone else having to undertake for you.  This is the mannered roles of everyday overturned - doing the personal thing you could never imagine yourself doing.

If  you want a scriptural commentary on what Jesus does here I think it would have to be Colossians 2.15:

He divested himself, took of his outer robe and tied a towel around himself. This is no ordinary act of humility, this is our Lord and Teacher divesting himself.  This is no ordinary authority, this is the wisdom of God made real. Jesus shows what making space for God to act looks like.  This is no ordinary action, this is dirty, humiliating action.  Jesus divests himself in the company of friends, not so many hours later others will divest him in naked torture.  The dirty work of the cross will
cleanse sinners every bit as much as the slave's bowl of water cleanses disciples' feet.

One winter's day Arthur went out to play football with friends. Afterwards he felt absolutely fatigued and hardly able to move.  Within days he was in hospital.  Within another few weeks he was bed-bound.  I got to know him more than twenty years later.  Arthur had absolute Ankylosing Spondylitis, all his bones were fused together.  He was rigid, a human plank.  The only movement left just a little flexing of his swollen arthritic fingers - just enough to exert pressure on a specially adapted buzzer switch.  Arthur could do nothing for himself - not scratch an itch, nor blow his nose, nor take food or drink, nor indeed manage any of the things of excretion without the physical assistance of another person.

If that wasn’t enough to contend with, Arthur also had one of the associated diseases that sometimes comes with spondylitis, namely psoriasis. His skin was a mass of flaky, itchy scales, from head to toe.  A searing, all over itch that he could never scratch.  How it didn’t drive him completely insane I never knew.  Every treat had been tried, but to no avail.

Caring for Arthur wasn’t a popular duty on the hospital ward.  Not that he was difficult or complaining – far from it – but his needs were so immense and so relentlessly intimate that it was emotionally and physically hard to keep at it.  Too hard for everyone that is, except one male nurse called Enrique.  Time and time again he volunteered.  Hours and hours and
hours at Arthur’s bed.  Not much spoken for Enrique didn’t bother with conversation in English, and Arthur had no
Spanish.  Enrique it was who saved Arthur’s skin – literally – as I said all the drugs and creams had failed so Enrique, thinking of things learnt at his Grandma’s knee, tried olive oil.  Bit by painful bit he picked off the scales from Arthur’s reddened skin and massaged it with olive oil.  It took six months of daily effort, but it worked.  The last time I saw Arthur his skin was pink and clear.  Enrique had saved his skin, literally.  This was no ordinary caring …

Enrique took the Jesus role – shunning the embarrassment of it, unflinching at the unpleasantness, the grinding emotional labour of it.  And isn’t Jesus nurse to us?  Divesting himself, taking the towel of loving care, and the sweaty agony of life spent for others?  Isn’t this company of disciples called church simply a hospital for sinners where the scaly itches of sin are cured, our skins are saved, and the catastrophic wounds of life apart from God salved and healed?  Our nurse Saviour walks through the wards of his world grieving at souls and bodies maimed, and he does more than any ordinary nurse could do, he takes the wounds upon himself.  This is no ordinary caring; this is God caring.  Food and actions around it touch places in our hearts and minds way beyond out appetites.

“Isn’t she a treasure!” was one of my Grandma Maud’s sayings.   think of it often in the Prayer Book communion service when that sentence from St Matthew is read before the offerings are received:
Lay not up for yourselves treasure upon the earth; where rust and moth doth corrupt,
and where thieves break through and steal:
but lay up for your selves treasures in heaven;
where neither rust nor moth doth corrupt, and where thieves do not break through and steal.

The same passage is the Gospel set for Ash Wednesday, except it goes on to the next verse where we are reminded that where our treasure is, there will our heart be also. Treasure the spotlight, and that is where your heart, your energy, your mind will be. Treasure the finer things in life, treasure people, and that is where your heart will be. But tonight is not about what we treasure - it is about what God treasures.

God uses the night before.  He takes over, bringing the people together, ordering what will happen, even offering explanation for why we do what we do. Underlying this concern for what will happen, underlying the details, is the value given to the people God has created. We are his treasures, and he wants us to be safe, and be with him where we belong.

He treasures the people of Israel; so much so that he makes it possible for them to escape from their slavery in Egypt, to begin a new life that will eventually lead them into a full relationship with Him. He treasures them; making sure they are fed for the journey ahead, and protected from the disaster he will bring upon the Egyptians that will give them the window of opportunity that allows them to escape.

He treasures the world he has made so much that he sends us his own son, that we might know the extent of his love for us. He treasures us so much that we are invited to call him 'Father,' and call Jesus 'our brother.'

Jesus treasures us as does the Father. On the night before he dies, he gathers his disciples for a final meal together. He identifies the bread and wine as his body and blood and commands the disciples to do this in remembrance of him. Not simply to remember him, but in remembering him, to be able to call upon him, his life to become one with ours, that we might be able to feed off his love and never be left despairing or alone. He treasures us too much for that!

And his followers have repeated that meal from the very beginning. Look at the accounts of the Last Supper - obvious liturgical references that pre-date the writing of the gospels. This treasuring of his people was felt with great power from the beginning - the meal had to be repeated. Through it Jesus' followers felt connected to him in a new way.

"This is my body." – they received what from then on they themselves were to be: the body of the Lord. Yes, they would betray him, they would deny  they were his friends, they would take flight - but above all that, they would know once and for all that a person can love unconditionally and be faithful to death. That kind of love changes things forever.

He commands those who would follow him to do to one another as he  has done to us. Bend down at the feet of one another, serve them, treasure them as Jesus has treasured us. As he has seen something is us to treasure, look into the eyes of another person, any person, and see what Christ sees – a person, a brother or sister to be treasured and loved with our own life.