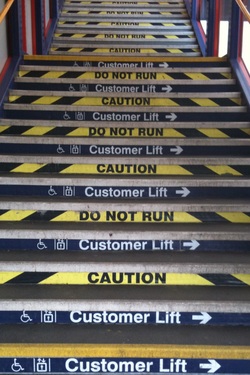 ‘I need your help. I want to confide. You see, I've got a problem. I don't
think I'm the only one, but sometimes it's hard to tell because we don't often talk about it much.  It’s one of those ‘personal’areas. So I ask your
discretion.  You know what I mean? I’d wink, if I could. My problem is … money. It's not that I don't have enough. It's just that I often think, and believe, and act like I don't have enough – enough money, well enough of … time, things, clothes, books, enough stuff.’

I quote -  almost verbatim - from a brilliant blog by Professor David Lose – you can find it here. To paraphrase how he continues:

I know I don’t have enough stuff because I live in a world that regularly tells me that I don't have enough – stuff, that is. 'Television commercials, posters, magazines, the internet and all the rest tell me that I'm insufficient, incomplete, and not quite right on my own, but they
also promise me that if I only buy this product or that – everything from
toothpaste, a new laptop, wrinkle cream, or a better car – then
I'll be complete. Our culture unequivocally equates consumption with
satisfaction, possessions with happiness, and material wealth with the good life.’ Ours is a ‘stuff love’ world. Trappings really do trap us.

What makes Professor Lose’s opening so disarming and so challenging is that it gets it exactly right. Like him, I know that this isn’t a description of life in ‘all its fullness;’ like him I don’t believe that possessions bring inevitable satisfaction nor that material wealth is the measure of happiness. In fact I know that this equation of wealth in goods or money with fulfilment is a lie. And I take as evidence to support that assertion not only the multiple biblical prescriptions warning about greed, but also all the studies that measure happiness. The wealthiest
countries of the world are all at the bottom of the table. And I know that I have a lot more stuff now than I did ten, or twenty or thirty years ago and yet  am no happier than I was then. (Not, that I’m unhappy; I’m just not happier).
When I left college I hired a self-drive van in which to take my belongings to my new home; the last time I moved house two huge pantechnicons were needed. I know as a rule in my head that money, stuff, doesn't make a person happy, and
yet deep down I still secretly believe that I'll be the exception to that rule; and an outside observer may well say that my behaviour suggests little more than lip-service to that rule.

Now the Gospel-writer Luke has something directly to say to this to this problem. Luke has three parables that
don’t appear in any of the other gospels that are about wealth – the trappings of life. First, the rich farmer and his barns (Luke 12.13-21), that we’ve just heard; then the Dishonest Manager (Luke 16.1-9), – the one where the boss hears
rumours so he says to the manager he wants an account because he’s going to dismiss him. Rather than draw up a concluding account, the manager calls his boss’ debtors and manipulates their accounts to their advantage in the hope of getting  some business from them when he’s out of a job.  The boss finds out what is going on – and commends the manager for his shrewdness.

And then finally there is the story of the rich man and Lazarus (Luke 16.19-31). The rich man feasts everyday with the beggar Lazarus at the gate sharing his lot with the wild dogs. They both die and the rich man ends up in the torment of Hades, whilst Lazarus finds himself at the side of Abraham in heaven. Even there the rich man tries to turn
Lazarus into his lackey and wants to send him to warn his brothers. But Abraham will have none of it. Moses and the prophets should be enough warning for them, he says.

Notice there’s no  glorification of poverty in these stories – Lazarus’ lot on earth is an evil thing and the farmer’s wealth brings him good things. On the other hand it’s clear that wealth is transitory – the rich farmer loses it in an instant, the
Dishonest Manager faces bleak prospects, the rich man’s wealth is gone in Hades. Wealth obscures moral vision – the rich man looks past Lazarus day after day, likewise the rich farmer is blind to the needs of the world about him. It’s as
if wealth creates a great chasm between people – isolates people, destroys their moral character – the lure of possessions pulls the manager into open dishonestly, the rich farmer is driven by greed. But it doesn’t have to be like  that – the rich farmer could have been rich toward God, if he’d thought about his neighbours, things could have been different. The Dishonest Manager ironically shows the potential of wealth to achieve the possibility of blessedness.

What's really scary, of course, is that I identify a little too closely with the rich man in each of these stories, the
rich farmer especially.  After all, he's not a cheat, or a thief, or even particularly greedy. He's just worked hard and made a lot of money –  like most of us dream about. His mistake, in the end, doesn't have to do with the wealth; rather, he goes astray by believing that his wealth can secure his future, can make him independent – from others, from need, from God. And I  catch myself dreaming that, too: ‘If I just had a little more in the bank, or if the mortgage was paid off, or if the car was bigger, or if the house was better, or – well, you can fill in the blank – everything would be okay.’ The allure of money is that it creates the illusion of independence. It promises us that we can transcend the everyday vulnerabilities and needs that remind us that we're mortal, created beings ultimately and always dependent on others and, most  especially, on God.

One of the striking features of today’s parable is the voice of God, it’s the only time in the Gospels, the New
Testament scholar Richard Bauckham notes, when God actually  speaks in a parable. Perhaps that's because the rich fool has shown blatant disregard for God's role in his life, so a direct word from God is most timely: ‘For most of
us fools in a foolish society,’ Bauckham writes, ‘the awareness that security lies entirely beyond our reach in God can come only with the shock of divine intervention in our lives.’ In a sense, the rich fool has used his wealth to set
himself up as a kind of ‘god’ who can ensure his own welfare.’ According to Bauckham ‘the seduction of wealth is the illusion it gives us of control over our lives.’

The rich farmer made  the mistake of believing that he really possessed his great wealth – stuff love –  although
Jesus said that the reality was that it possessed him. And so Jesus concluded his parable of the rich farmer by saying, ‘So it is with those who store up treasures for themselves but are not rich toward God.’ He had stored his wealth in earthly barns, even though he had had the opportunity to store it in heaven. Wealth is not necessarily wrong or sinful, according to Jesus, but it is problematic. The spiritual problem of wealth is that it anchors our hearts too firmly in this world, rather than in God’s  kingdom.

The story is told that at the funeral of the fabulously wealthy magnate, Aristotle Onassis, one of the mourners turned to
another and said, ‘How much did he leave?’ And his friend replied, ‘Everything. He left everything.’

Beware of the trappings – they maykill your very soul.