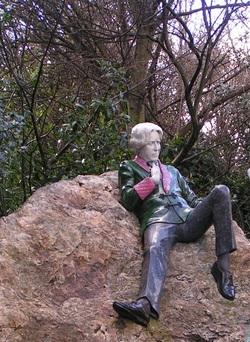 Oscar Wilde memorial, Dublin
Whoever gives even a cup of cold water to one of these little ones in the name of a disciple—truly I tell you, none of these will lose their reward. (Matthew 10.42)

When the great playwright and wit Oscar Wilde was sent to prison in 1895 it was an ultimate humiliation for him. In his day he was a real celebrity but all that evaporated once he was convicted. Whenever the prison authorities moved him in public he was spat at and jeered. On one occasion when the crowd was particularly hostile, a friend of Wilde appeared and made a simple gesture of friendship and respect that silenced the crowd. What did he do? As Wilde passed by, handcuffed and head bowed, the man simply raised his hat to him, the smallest of good deeds.

‘Men have gone to heaven for smaller things than that. I do not know to the present moment whether my friend is aware that I was even conscious of his action. It is not a thing for which one can render formal thanks in formal words. I store it in the treasure house of my heart. I keep it there as a secret debt that I can never possibly repay. When wisdom has been profitless to me, and philosophy barren, and the proverbs and phrases of those who sought to give consolation as dust and ashes in my mouth, the memory of that lowly silent act of love has unsealed for me all the wells of pity, made the desert blossom like a rose, and brought me out of the bitterness of lonely exile into harmony with the wounded, broken and great heart of the world.’

The smallest of good deeds: a little thing done in love. The cup of cold water is the symbol of that. It doesn't take much to be hospitable, welcoming, and accepting of other people. A cup of cold water replicated in a thousand and one other simple small deeds. And Jesus tells us that every single one of those small deeds is important —even eternally significant. It doesn’t take much, every one of us can achieve these things, and every one of us can make that difference. In those smallest of good deeds is God.

But what about when it isn’t a small thing done: when it takes not the smallest of effort but mammoth determination? Water may not be a bad symbol for that as well. Water comes easy to us, even when drought status is declared. But for a billion people on earth it is different. They have to labour for water every single day - it’s a great effort to fetch it, carry it, let it settle, and find fuel to boil it. Water is not always a sign of what comes easily.

That brings me to Abraham and Isaac - a really scary story. How are we to read it, to make sense of it?

Is it a morality tale, created to teach that human sacrifice must cease? Maybe. Is it a religious tract, expounding the truth that God requires obedience, not sacrifice? Maybe. Does it proclaim that God is no respecter of persons, even a person with whom a solemn covenant has been made? Maybe. Is it history, the record of an event that took place long ago? Maybe. Or, is it a type-text for which Christ on the cross is the anti-type? Again, maybe. Does it demonstrate that family values are irrelevant to God? That God is bigger than those things? Maybe. Does it then become an object-lesson about humankind's incapacity to comprehend God's thoughts and God's ways? Maybe.

Abraham goes off with Isaac to worship God. Is he really going to kill his son, the one in whom is all his delight and future? Is Moriah going to be the end for Isaac? Scary stuff.

It’s a test certainly. God is testing Abraham. God always provides, but does Abraham believe it? Perhaps Abraham has gone bonkers, imagining that God would require of him his son’s life. Does Abraham actual get the fact that God is to be trusted in all things? Not just in the little things which most of us can manage most of the time, but also in the hard and difficult things, where the effort is immense, the worry burdensome, the way forward not obvious at all. Like carrying your water pot day after day to a dried water course, trusting and hoping that in the digging you’ll find enough, not just for yourself but to share as well.

The water of baptism shares that so easy and so immensely difficult ambiguity. The water of baptism is a washing and a sharing. Those who are washed know the joy of being provided for; this world is a welcoming place where the love of Christ is shared. In baptism done to us we share in the reviving waters, so that we may in our turn may share that water with others. It doesn’t take much. And when the hard times come, the water of baptism tells us that the world is a welcoming place, no matter how experience tries to drown the thought. It doesn't take much to make you feel left out, unwelcome, a stranger. But it’s NOT TRUE. God always, but always provides. We are welcomed in baptism in the name of the welcoming God. God in Christ has done what needs to be done already. We’re welcome, we’re at home. Share the welcome.

I'm indebted to a preacher colleague for the story of John. John had wild hair that he didn’t often comb; he wore a T-shirt with holes in it and holey jeans as well. His shoes were well-worn sandals that no longer fastener. There was an annoying flip-flop sound as he walked. This was his wardrobe throughout his university days, and not even cold weather augmented it in any way. John was, how would you put it? Kind of esoteric, and he was academically very, very bright. As a student he became a Christian.

Across the road from the main campus was a smart-people’s church, if you understand me. They wanted to develop a student ministry but didn’t really know how to go about it. One Sunday John decided to go there. He walked in, clothed as usual, his broken sandals flip-flopping against his heels. The service had already started. You know what it’s like when you go into a strange meeting already begun. It’s hard to see where there might be a space for you. And it was hard for John to find a space that as he walked down the aisle that Sunday.

Flip-flop. People began to look a bit uncomfortable, though no one actually said anything. John was getting closer and closer to the platform from which the service was being led. So unable to find a seat, John squats on the carpet. That’s what students do, but no one had done it in that church before!

By now it was possible to feel the atmosphere. The tension and sense of threat is tangible. The Vicar sees that from right at the back of the church a sidesman is making his way towards John. Sidesmen are meant to make sure worship can be conducted in a seemly way and it looks as if this one is determined to do his job.

This sidesman has silver-grey hair, a three-piece suit, and a pocket watch. He’s very elegant, very dignified, very upright, and in his eighties. He walks with a stick and as he proceeds down the aisle everyone is thinking, ‘You can't blame him; he’s going to sort it, after all a man of his age can’t be expected to tolerate this kind of behaviour. And why should we?’

It takes ages, or it seems so, for the old man to reach the youngster. There is utter silence, only interrupted by the occasional tapping of the walking stick. Nothing more is going to happen in this service until the sideman has done what he has to do. The old man drops his stick, and with great difficulty lowers himself to the floor and sits next to John.

When the vicar recovers enough to exercise some control he says, ‘What I was about to preach, you wouldn’t have remembered. What you’ve just seen, you’ll never forget.’

Whoever gives you even a cup of cold water ... will most definitely not lose their reward.