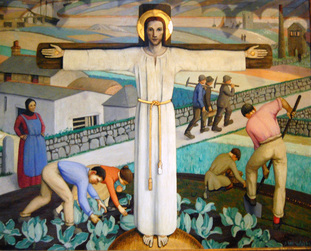 From Truro cathedral
By night she was on permanent night-duty as a nurse and by day she cleaned cinemas. I learnt a lot from her – she was a very capable and caring colleague when I too worked in a hospital. I loathed my turn at night-duty - yet it involved only 25% of my working hours – I just couldn’t understand how she coped so well with it and a second job. If asked, she always replied that it was to fund her expensive holidays. Once or twice a year she took herself away to exotic, far flung places. She insisted long hours of working were merely a means to an end. That was a humble reply, but not an absolutely frank one, I think. She was simply too good a nurse to be simply going through required tasks as nothing more than funding for fun. Part of the reason had to be that she enjoyed what she was doing, in a way that I usually didn’t.

Research recently published by the Department of Work and Pensions discloses that nearly three-quarters of working women aged 55 to 75 describe their health as good compared to less than half of those who have actually retired. Similarly the study also showed that working men of the same age were healthier than those who had retired. There are probably lots of caveats that need to be added to those statements, but nevertheless it’s clear that there is something life-giving about work that is enjoyed. Most of us recognize that; and we recognize too that dull, boring and unfulfilling work has the opposite effect.

When St Paul writes that he laboured and toiled ‘night and day’ when he was with the Thessalonians so that his presence wouldn’t be a burden to them, what I hear is Paul revelling in work that enabled him to support himself. Night and day it might have been – as it was for my nurse colleague – but it was worth doing. And why? So that he could freely share his teaching of the Gospel with the people he was visiting without any sense of dependence or exploitation that could so easily have diverted their attention from what matters most.

And what mattered most? That God was calling Paul’s Thessalonian friends into his own kingdom. No one could say that Paul’s efforts on their behalf were for any other reason than their well being. There is no gain for him; he is not in it ‘for the money’ or any other personal advancement – ‘pure, upright, and blameless conduct’ was the character of his witness, and physical work to give him the food and resources to advance that witness, was a blessing – as hard as it was. Labour with a purpose is something to give thanks for, and especially so here because the Thessalonian Christians received the word Paul offered as God’s word at work in them.

Paul is undoubtedly a great teacher, but he is not afraid of physical labour in order to make room for his teaching and to authenticate its graciousness. Perhaps he knew Christ’s own teaching about those who claimed the authority of teachers yet put all the burden of effort on those they claimed as learners. In Matthew 23 Christ criticises those who lay heavy burdens on the ones they teach and instruct ‘but they themselves are unwilling to lift a finger to move’ those burdens (v.4). And he goes on to condemn the teacher who is more concerned about personal status, being honoured, and receiving a public title, than what godly learning requires. Know, he says, who the real teacher is: ‘for you have one instructor, the Messiah’ (v.10). So to the Thessalonian Christians Paul states boldly that it is ‘God who calls you into his own kingdom and glory’ (2.12). Paul’s labours are about urging, encouraging, indeed pleading that those he teaches should lead a life worthy of the one who has called them. It’s not about Paul, it’s about the one who does the calling – God alone – and nothing in Paul’s actions must get in the way of that. God it is who has called them into his own kingdom.

The Messiah calls them into the messianic kingdom. The first followers of Christ, along with many Jews of the time, longed for the day when the Messiah would appear to roll up, as it were, the map of human history. Jewish believers spoke of the Messiah, and Christians of the return of Jesus. Both longed for a new age when the old order will be done away and God’s rule will reconfigure all that is. In this return will be inaugurated an era of peace and justice on the earth. God’s people will experience a newness in all things that will disclose in actuality God’s purposes and intentions for his beloved. In face of persecution, violence and oppression this longing for the new age was an immensely powerful hope. Fuelled by this expectation people found courage and hope where previously there was only despair – even torture and death couldn’t crush this expectation, as Matthew 24 makes so plain: ‘Anyone who endures to the end will be saved. And this good news of the kingdom will be proclaimed throughout the world’ (vvs 13-14).

The expectation is so fervent; so all embracing; so motivating – yet no one can say when that time will be – not even Jesus. All he says is that there will be many false claims and many false starts. And he also says something profoundly disarming, something that every believer must think long and hard on: ‘the love of many will grow cold’ (Matt 24.12).

Could it be that this is the very thing Paul is concerned about? So eager for the return of Jesus some Thessalonian Christians were planning to just sit things out – they expected Jesus’ return today, or tomorrow, or at most in a little while. Why work? Why indeed do anything but pray and hope?

Paul sees in such surrender to expectations only disillusion. Yes, the Thessalonians are called into the kingdom – but the kingdom is something to be worked for as it is waited for. In effect he is saying ‘do as I do’ – I have laboured, night and day that you may see that work is part of ‘life worthy of God.’ God’s word isn’t a burdensome expectation of the kingdom; it is a striving after Christ’s active rule here and now as we await its final completion. Let not love grow cold; work for one another’s good – work for the kingdom.